END_OF_DOCUMENT_TOKEN_TO_BE_REPLACED

Third poll this week has outstanding news for Michigan Democrats, Schauer up by 2.2 points over Snyder

It’s been a terrific week of polling for Michigan Democrats. I’ve written about two polls (HERE and HERE) that statistical ties for Mark Schauer and Mark Totten with Gary Peters pulling away from Terri Lynn Land. Yesterday, a USA Today poll conducted by Suffolk University gives even better news. Here’s the synopsis: Mark Schauer leads Rick Snyder for Governor by […]

END_OF_DOCUMENT_TOKEN_TO_BE_REPLACED 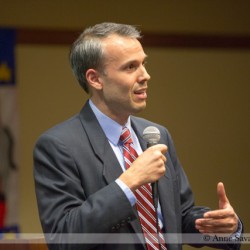 END_OF_DOCUMENT_TOKEN_TO_BE_REPLACED

Only in Republicanland is this a good idea This is week in a somewhat surprising move, Republican Secretary of State Ruth Johnson proposed a rule to require transparency in the funding of so-called “issue ads” that don’t promote specific candidates. Millions and millions of dollars are spent every election cycle on these ads which are, more often than not, nothing […]

END_OF_DOCUMENT_TOKEN_TO_BE_REPLACED When you can’t win on the issues, you have to cheat

Earlier this year, Republican Secretary of State Ruth Johnson decided to add a citizenship checkbox to the voter registration slip you have to fill out to vote. This entirely unnecessary step was seen by many as just one more attempt to freak out voters and dissuade them from voting. Governor Rick Snyder vetoed the legislation that required it but the checkbox was still on the slips, creating mass confusion.

Just what the Republicans wanted.

That and more including the frisking of voters in Detroit by a man wearing fatigues after the jump.

END_OF_DOCUMENT_TOKEN_TO_BE_REPLACED END_OF_DOCUMENT_TOKEN_TO_BE_REPLACED

Michigan Dems can vote in both primary and caucus this year