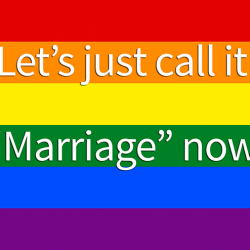 Last week was an incredible week for all Americans, but most especially for progressives and activists and advocates for equality and equity. We need to take time to celebrate these crucial and impactful Supreme Court decisions, all three of them. King v. Burwell affirmed what most common sense non-elected Republicans have known from the beginning of the Affordable Care Act. […]

END_OF_DOCUMENT_TOKEN_TO_BE_REPLACED

Regular readers of this website know very well that I abhor Public Act 4 — Michigan’s so-called Emergency Manager Law. It is the most outrageous government overreach in my lifetime, put in place by hypocritical Republicans who claim that they are for “smaller government”. The fact is, there is no larger government intrusion into the lives of Michiganders than PA 4. Period.
Click through to read why you should VOTE NO ON PROPOSAL 1.

END_OF_DOCUMENT_TOKEN_TO_BE_REPLACED

In the wake of the suspension of Public Act 4, Michigan no longer has “Emergency Managers”. We now have, once again, “Emergency FINANCIAL Managers”, men and women with reduced power and a singular focus on financial matters. Several school districts and municipalities around the state have wasted no time in reasserting their power as elected officials.

Many examples and commentary after the jump.

END_OF_DOCUMENT_TOKEN_TO_BE_REPLACED

This will NOT be pretty

Now that Public Act 4 — Michigan’s anti-democratic Emergency Manager Law — is suspended pending the November election, stuff is really beginning to hit the fan around the state.

END_OF_DOCUMENT_TOKEN_TO_BE_REPLACED

What if killing off ALL of Michigan’s ballot initiatives is exactly what those in power want? (UPDATED)

I didn’t see that one coming at all

This wrote about Michigan Secretary of State Ruth Johnson’s brief to the Michigan Supreme Court in which she says that if the petitions to repeal Public Act 4 are insufficient to meet the rules set out in our state constitution, the so are ALL of the other ballot initiative’s petitions. My comment in that post was that “gives me hope” and I suggested that this was an unintended and undesirable side effect of this court challenge.

I’m having second thoughts on that.

END_OF_DOCUMENT_TOKEN_TO_BE_REPLACED 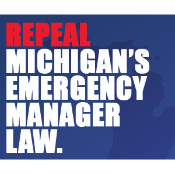 Tomorrow, Wednesday, July 25th, the Michigan state Supreme Court will hear arguments regarding the petitions used to gather signatures to put Public Act 4, Michigan’s Emergency Manager Law. At issue is whether or not a concocted lie about the font size of a single phrase on the petition, “REFERENDUM OF LEGISLATION”, is enough to disenfranchise Michigan voters and throw away the voice of the nearly quarter million people who signed the petitions.

You can join the protest at the Supreme Court tomorrow and free bus rides are available from around the state. Details after the jump.

END_OF_DOCUMENT_TOKEN_TO_BE_REPLACED