Yesterday I highlighted the bad behavior of the Michigan Senate Majority Leader, a handful of his colleagues, and the sexist environment that they have engendered through decades of underrepresentation for women in the halls of power in Lansing. But misogyny is not their only sin, so I thought it appropriate to share another.

The recent impeachment trial of Former President Trump over the insurrection that occurred at the U.S. Capitol Building on January 6, 2021 has kept the spotlight on the events of that day. Speaker Nancy Pelosi recently announced a commission that would investigate those events further, akin to the probe into the attacks of 9/11. The events of that day surprised many throughout the country, but it should not have surprised anyone in Michigan. This was foreshadowed by the occupation of the Michigan Capitol building back last April. 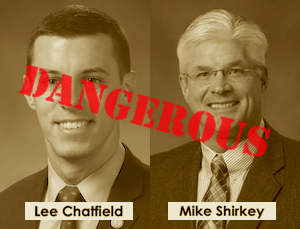 When this occurred, legislators on both sides of the aisle looked to the Speaker of the House and the Senate Majority Leader for leadership. Did they condemn those who brought weapons into the Capitol and had legislators fearing for their safety, some even buying bulletproof vests or having armed escorts walk them to the Capitol to protect themselves? No. In fact when the matter of restricting weapons in the State Capitol, similar to the ban on handmade signs, came before the Michigan Capitol Commission, Shirkey supported a half-measure, which allowed weapons to continue to come into the building, so long as they were concealed. This certainly does not leave legislators any safer than they were previously.

It was recently reported that Senate Majority Leader Mike Shirkey met with the militia in April and, two weeks later, spoke at their event telling them “we need you now more than ever.”  He has also told the media that he believed these militia groups got a ‘bad rap.’ These words signal support for the insurrectionists that visited the State Capitol that day, if only implicitly.

However, as a recent hidden recording showed and hot microphone confirmed, he has doubled down the conspiracy-theorist’s rabbit hole suggesting that this was a ‘hoax’ perpetrated not by supporters of President Trump, but a false flag operation perpetrated by the President’s political opponents. This statement provides cover for the actual criminals and allows them to continue unchecked.

But his support and cover are not victimless. What we saw unfold next in Michigan tells a powerful story of what happens when such conspiracy-believing groups are not told the truth and are permitted to continue to operate unchecked. Just months later, a kidnapping and assassination plot was foiled that these same groups planned against Governor Gretchen Whitmer.

Shirkey’s support for these groups has placed Michigan in a negative light as Michigan has been held up as an example of a backward state on SNL, Last Week Tonight with John Oliver and in print media.

As with the institutionalized misogyny I wrote of previously, support for insurrectionists has been cemented into the foundation of the Michigan Republican Party organization. Meshawn Maddock, who was the Co-Founder of Michigan Women for Trump 2020, organized several busloads of Michigan Trump Supporters to go to Washington for the Rally with the President on January 6, 2021. She called the insurrectionists “The most incredible crowd and sea of people I’ve ever walked with…” No longer an outsider looking in at the Michigan Republican Party, their members saw fit to elect Maddock as their State Party Co-Chair earlier this month, despite full knowledge of her actions, which were well documented in many media articles.

With the recent verdict acquitting the former President in the Impeachment Trial, I worry that the Insurrectionists may view the verdict as a tacit message of support and further worry what the predictable fallout will be based on what we have already seen in Michigan.

We must stand up as leaders regardless of party affiliation to say that the above mentioned behavior exhibited in both the State Capitol Building and the U.S. Capitol Building is unacceptable and cannot be tolerated.  Senator Shirkey, in particular, must stand up and denounce the actions of these militias and insurrectionists immediately. Sadly, we already know he will not do this, since he was recently caught on tape saying that he did not regret the sentiment behind his words.

We can and should expect better of our leaders. Not stoking the fires of insurrection against our government should be the bare minimum requirement for the Senate Majority Leader in our State. All of this has left me feeling nostalgic for the days when the worst we could say about him was that he was out of tune as he sung a hymn to avoid answering the media’s questions, on his way to the White House to be lobbied to illegally overturn an election.