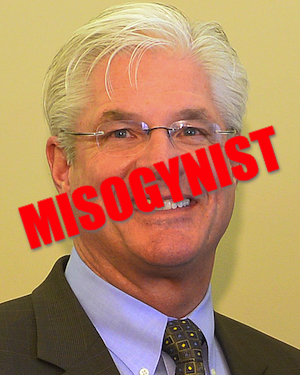 The Mike Shirkey I knew when I served in the Michigan House of Representatives was just as bad as the one we see today. I called him vile in 2012 and that description continues to hold true.

Being term-limited has only emboldened him to say terrible and misogynistic things out loud because he knows that he will never be held accountable for his actions.

He will ride off into the sunset with a cushy job, making a six figure salary. His fate is already written.

He will not be censured, he will not resign, and he will not be recalled by the voters of his district. Businesses may condemn his statements but will continue to contribute to his campaign, even though he is currently not running for particular office.

I call on his business and organizational donors to boycott donating to Senator Shirkey’s campaign, PAC and other associated groups, and to demand refunds of those contributions already made. Continuing to fund his campaign and leadership accounts is tacit approval of his words and actions, and they cannot and should not be tolerated.

The issue is that Senate Majority Leader Shirkey is not the whole problem. He is merely the latest in a series of legislators and legislator-adjacent men who feel empowered by the ‘boys club’ atmosphere of the Michigan Legislature to treat and talk to women however they please without consequence.

Current Macomb County Prosecutor, and Former Senator, Peter Lucido just announced that he would be enforcing adultery laws, despite his lewd comments to a capitol reporter trying to do her job. A capitol reporter just suggested that the Governor should call Shirkey to accept his apology for the ‘spanking’ remark that he made when he was caught on tape. Former Senator Rick Jones called a female PR Executive a ‘hooker’ simply for advocating for her clients. Three representatives joked that they understood their female constituents because they read Glamour magazine one time. Certain journalists continue to enable this behavior. This is not even touching on that time my colleague and I were silenced for engaging in debate on the House Floor.

In none of these cases were the Representatives or Senators involved punished for their actions. At best they were ‘investigated’ for show and slapped on the wrist. Then the media fervor moved onto the next outrage and people forgot.

The abhorrent treatment of women is literally built right into the building. I recall the window in the Republican Caucus room that looked directly into the women’s bathroom, just off the House Floor, which was often not covered.  At one point, I asked for that window to be fogged or closed off, only to be told that doing so would harm the ‘aesthetics of the Capitol.’  This window gave the Republican caucus members, most of whom were men, a too-intimate view of female legislators in the ‘privacy’ of their restroom.

That’s not to say that there are not some women who are to blame, too. The Republican women who sit quietly and let this behavior continue to happen are culpable by association. If they don’t condemn this behavior, they condone it. If they do not hold their members accountable, then they are responsible.

Sexual harassment, acts of indecency, insensitive and offensive remarks: If this were a university sports team, the NCAA would shut them down for lack of institutional control. It’s frankly a wonder that you do not hear more cases of harassment coming out… but I suppose we know how the Republican Party makes problems go away.

Perhaps we could start small. Did you know that it is the Senate Majority Leader’s Office is in charge of writing, implementing, and enforcing the Senate’s sexual harassment policy?  Senate Majority Leader Shirkey clearly is not the best person to be in charge of these important functions. Perhaps we should consider vesting this responsibility in the hands of the Senate Human Resources Office.  Arguably, that office should have the human resource professionals and would likely operate in a non-partisan way. Then the real accountability begins and we can start to ask ourselves why voters continue to elect people like this.

If that is not an acceptable remedy, then the Legislature should adopt a Code of Conduct, with laid out penalties for specified behavior.

Even with the suggestions above, I would be shocked if they do any good as it will not be until the voters hold those that speak in such a manner accountable or impose rules upon them. Republican lawmakers simply cannot be counted on to police themselves. We, the voters, will have to see to that, in the end.