MIGOP vs. LGBTQ+ — The story of Michigan Republican Lee Chatfield failing up – spectacularly

I have taken the past couple of days to reflect on how Mike Shirkey and the Republicans in the Michigan State Legislature have contributed to the culture of misogyny and support of the insurrectionist militias that have attacked the U.S. Capitol. But these are not their only sins. They have also victimized and persecuted members of the LGBTQ+ community through their policies and practices, and have contributed to a hostile environment that has led Michigan to be ranked 21st in the nation for LGBTQ+-friendly states. 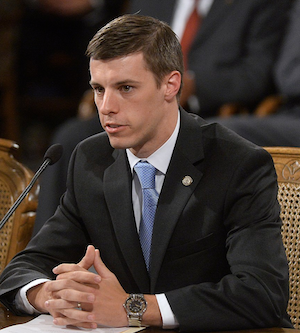 This is not a new revelation.  Michigan has lagged behind other states for years and it is appalling that such hostility remains in the 21st century.  This fact is being highlighted now because of the swanky gig that former Speaker of the Michigan House Lee Chatfield was recently anointed to at Southwest Michigan First, an economic development group.  It may be of importance to note that Chatfield does not have an economic development background and he is not from the Southwest Michigan area. Regardless, he has been brought on with an annual salary of nearly $750,000.

Chatfield’s rise to prominence came at the expense of another Republican member of the State House, Frank Foster. Former Representative Frank Foster had the courage to come out in favor of legislation that would have added sexual orientation and gender identity to the Elliott-Larsen Civil Rights Act. Chatfield rewarded Foster’s inclusionary thinking by beating him in a primary, fought largely over Foster’s support of these additions. The end result in 2014 was that it was still legal in Michigan to discriminate against members of the LGBTQ+ community.

Despite Chatfield, the year of 2014 was the beginning of a jubilant time for LGBTQ+ rights nationwide. The marriage equality cases that would eventually land before the U.S. Supreme Court were being decided. Then-Attorney General Bill Schuette sent a letter to County Clerks, telling them not to issue marriage licenses to same-sex couples. Thankfully, four democratic County Clerks, including myself, did not scare easily and loving couples were afforded an equal opportunity to be married before another court issued a stay, haulting further same-sex marriages . It was not a jubilant time for Governor Snyder, who fought against rulings and was eventually ordered to extend benefits to the newly married couples. Finally, the U.S. Supreme Court ruled in favor of Marriage Equality and all loving couples are now able to wed.

Chatfield’s tenure as Speaker was a dark age for the advancement of LGBTQ+ rights in Michigan. No meaningful legislation moved forward. Even while progress was being made nationally, the Marriage Laws of Michigan still have not been updated to include changes to keep up with the times. To this day, it is still legal in Michigan to discriminate against the LGBTQ+ community. We are but one U.S. Supreme Court decision away from unraveling marriage equality.

In addition, Chatfield’s colleagues have been given the latitude to make outrageous statements that have contained ugly, homophobic language. GOP-friendly organizations have run campaign ads against LGBTQ+ candidates that are hurtful, derogatory and completely uncalled for. Under Governor Snyder’s administration, the legislature made it harder for LGBTQ+ parents to adopt in Michigan. Representative Al Pscholka and others made derogatory comments on the House Floor. Even School Board members were not immune, as those who stood up for LGBTQ+ rights were faced with curiously well-funded recall campaigns.

Chatfield walked into his new job with this new employer having a well-documented history of discriminatory action in his past. It is no surprise that forward-thinking leaders, like those on the Kalamazoo City Commission, would take immediate steps to withdraw their support for this organization. It seems likely that the Kalamazoo County Commission may also demonstrate the same moral leadership.

It is refreshing to see actual consequences for these hateful stances. Surely this is one of the first times Chatfield has felt it. As a result, he came out today in favor of adding sexual orientation and gender identity to the Elliott-Larsen Civil Rights Act. Glad you got there, Lee, but it is too little, too late:  You had your chance to enact this change and you actively chose not to.

Make no mistake, Chatfield leaving the Legislature does not foretell a golden age of advancement for the LGBTQ+ community in Michigan. Mike Shirkey is still here and he too has pledged to fight against that hallmark civil rights legislation, just like Chatfield did.