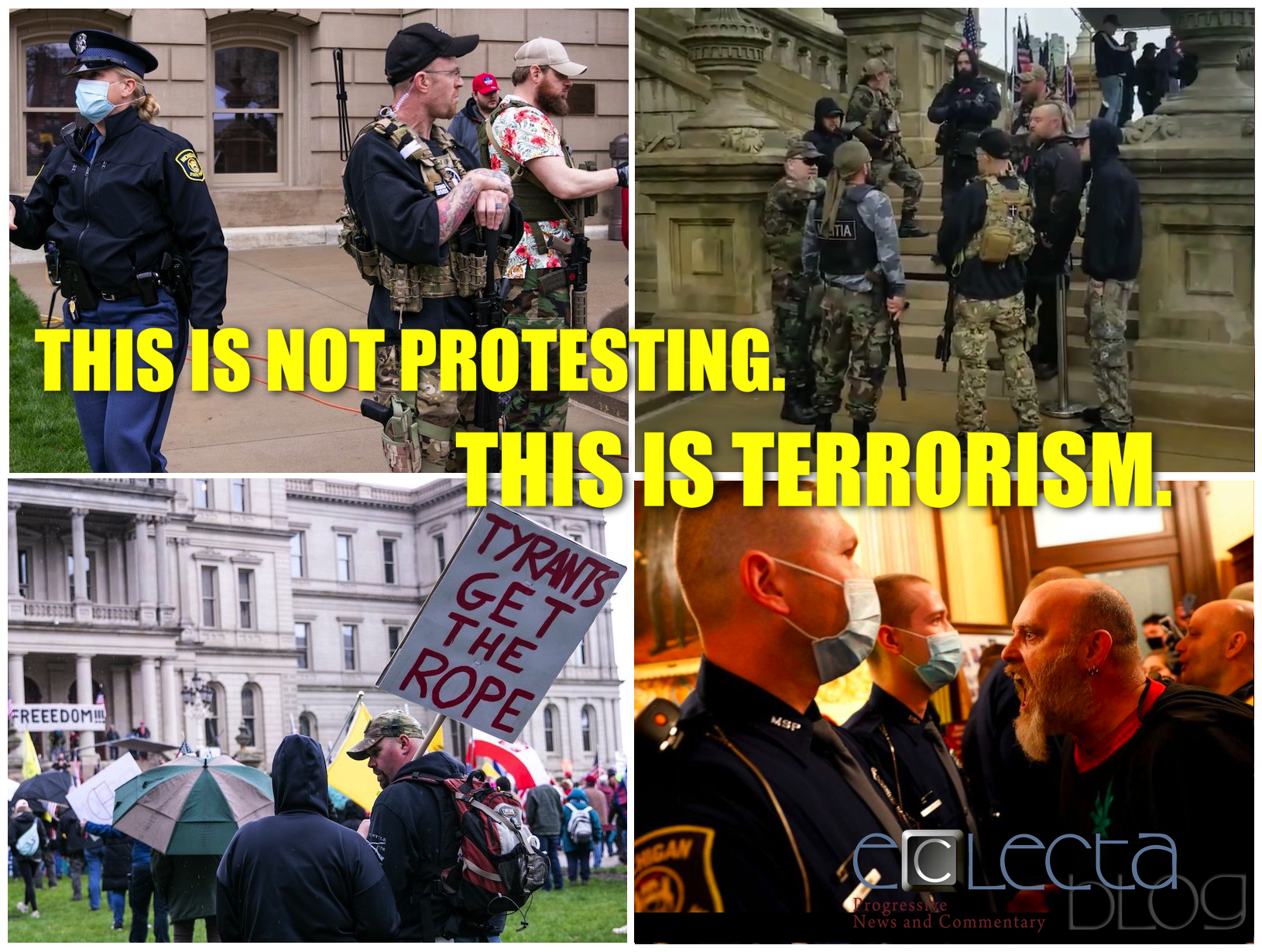 By now you have likely heard about the gathering of a couple hundred self-proclaimed “patriot” protesters who stormed the Capitol Building in Lansing, Michigan yesterday to demand that our Governor loosen restrictions further and earlier than she already has. The restrictions require non-essential workers to stay home and for those who must go out in public to wear masks to help quell the spread of the the novel coronavirus that causes COVID-19.

Governor Gretchen Whitmer has already begun easing some of the restrictions put in place — like opening up gardening sections of big box stores, something that seemed to be a primary source of outrage at the last protest at the Capitol — but that hasn’t been quick enough or comprehensive enough to satisfy these “protesters”. They arrived in large numbers, many dressed in military garb and openly carrying long guns and other intimidating weaponry. Most of them made no pretense about wearing face masks, much less maintaining the six-foot spacing that helps protect them and other from the spread of this deadly virus.

They gathered on the Capitol steps for a rally where they questioned the 6-foot spacing recommendation (“Maybe it’s five feet, maybe it’s three and half, maybe it’s eight. I don’t know. So why six?”) They spoke of tyranny, and compared themselves to the likes of Rosa Parks and Dr. Martin Luther King, Jr. And all the while, the stage was flanked by Ted Nugent cosplayers carrying semi-automatic weapons.

Young girls clad in patriotic outfits and wearing Trump and Obama masks danced to a rewrite of the song “Candy Man”:

Now this is happening. pic.twitter.com/w1CkLB3T3s

They carried signs calling for the lynching of Governor Whitmer and lamenting the tyranny that is keeping our state as safe as it can possibly be from the pandemic that has gripped our planet. One car even sported a noose.

Another restrained, reasoned exercise of free speech in Lansing this morning | Photos by @annaliznichols of @MichiganAdvance pic.twitter.com/cbPI292vEO

After the rally, the “protesters” headed inside the Capitol Building, demanding to be let onto the House and Senate floors. A quirk in Michigan law prohibits signs inside the Capitol but allowed them to bring their weapons inside. During the 2012 “Right to Work” protests by labor supporters (who Republicans ironically called “thugs”), Republicans banned signs in the Capitol but did not extend the ban to the open carrying of weapons in the building. And, yesterday, that’s precisely what the faux patriots did. Once inside, they verbally assaulted the State Police and other security personnel who were keeping them from entering the floor of the legislature:

At the Michigan capitol building today in Lansing. Photos by Jeff Kowalsky (AFP via Getty) pic.twitter.com/Zf1QdypnNr

On the Senate side, Senate Majority Leader Mike Shirkey let them into the gallery where they proceeded to intimidate the senators below:

Instead of decrying the violent rhetoric and flagrant disregard for the social distancing and mask wearing edicts, Shirkey met directly with protesters, wearing his mask as some sort of chin warmer or beard protector:

Senate Leader Mike Shirkey explaining to protesters what the Senate is currently working on: pic.twitter.com/mETsJDTJWy

Let us all be clear on what happened in Lansing yesterday: This was not a protest. This was terrorism. The actions of these people, supported and encouraged by the Republican “leadership” in the legislature, made a visible show of force in order to intimidate and terrorize Gov. Whitmer and the Democrats in the legislature who support her life-saving efforts in our state to halt the spread of COVID-19. It was intended to create a sense of fear, the very definition of a terrorist act.

The largest protest at the Capitol prior to this was in 2012 when Republicans rammed through Right to Work. Thousands of Michiganders rallied to peacefully (but loudly!) support workers. The Republican Leadership then called in the State Police who proceeded to mace the protesters — none of whom were armed — and barricade the building, locking them out of the so-called “People’s House.” Recall these striking images:

Seriously how many year gas guns do you need INSIDE the Capitol? So crazy. #saveMI #1u pic.twitter.com/KdGoX7KF

What Governor Whitmer and her talented team are doing in our state is wildly popular. The latest Navigator poll shows that two-thirds (65%) of Michiganders support her efforts to keep us all safe. Around the state, citizens are complying with the temporary restrictions in order to protect each other, particularly the most vulnerable people in our state.

But yesterday, a couple of hundred white-privileged Michiganders decided to try to intimidate the Whitmer administration and our state legislators using threatening language and brandishing weapons that have no practical use except to kill human beings. They’re little more than selfish, self-centered, petulant brats with big guns who don’t want to be inconvenienced in any way, even if it is to protect their friends and neighbors. It is terrorism and we should call it that.

Republicans like Sen. Majority Leader Mike Shirkey who posted on his Facebook pageposted on his Facebook page, “To those coming to Lansing today to express your frustration with our governor’s actions, I respect and defend your right to do so,” are aiding and abetting what would be considered criminal behavior by rational, thoughtful people. Their silence as this sad spectacle played out is disgusting and repugnant and shows the depths to which they have sunk to try to retain power in the legislature in the face of overwhelming support for our Governor.

Call this what it is: terrorism.