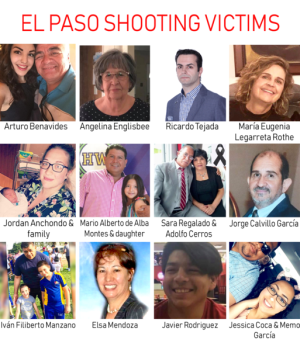 Connor Betts is the suspect in the mass shooting in Dayton, Ohio, which left 9 dead and 27 injured. Patrick Crusius is allegedly responsible for the mass shooting in El Paso, Texas, which left 20 dead and 26 wounded. There should be no confusion at this point about the fact that white supremacy is on the rise in America. As a woman of color who is sick and tired of the political rhetoric and lack of action surrounding gun reform, here is my response to this phenomenon:

1) Whenever a white man commits mass murder, his mental health is questioned. Despite the fact that domestic terrorism by white men is a reality in America, we continue to make excuses for white men – as if they are “incapable” of committing these crimes. These are the same people who do not care about expanding mental health care for Americans. We continue to ignore the dangerous nature of white supremacist ideology and the very real mental and physical impacts it has on non-whites. Non-whites, on the other hand, because of their morally inferior natures and mental capacities, are stereotypically more than capable and cunning enough to kill others.

2) “Islamic extremism” should NOT be likened with white supremacy/nationalism. Islam is a religious belief followed by millions of people across the world, and there are groups who have used the word of God to perpetuate violence. It’s a perversion of a beautiful religion that strives towards peace and harmony amongst people. It should be labeled as extremism that twists religion, and not Islamic extremism. By nature, white supremacy is an ideology that perpetuates the notion that the white race is in all aspects superior to all other races, and thrives on the fear that other races will attempt to overthrow/drive out the white race. In almost a Darwinian fashion, it becomes a survival of the fittest game – destroy the non-whites to ensure that the whites can rule.

To this end, when white supremacists chant that Jews will not replace them while holding tiki torches in their grubby hands, or write manifestos declaring that the Hispanics will invade Texas, we have to to take all this as a manifestation of white supremacy. When groups like ISIS use rhetoric against the West, we CANNOT assume that Islam as a faith preaches the same ideologies, an we must separate the horrific existence of these groups with the true faith. We have to stop the stereotypes that liken Muslims to terrorist if we are even to get to the bottom of terrorist motives in other parts of the world.

3) People of color scream from the rooftops against this sort of violence and rhetoric consistently, and yet they continue to be ignored. They have voices, but people just choose not to listen. This is because throughout history, they have been likened to less than an animal, as slave labor, as 3/5 of a person, or as politically expedient figures who will work for the convenience of those in power. This is not about identity politics. It’s about giving people of color the human decency and the dignity they deserve, which they have been denied in so many spaces and places.

Grassroots activists should be welcomed into the arenas that will allow them to make social and political changes. Especially those who belong to minority communities. This is what is required when there are very few people of color who hold political power.

4) The violence that results from white supremacy and most terrorist ideologies are carried out by…men. That is no coincidence, There is a serious problem in our society with men getting to the point that they feel willing to kill dozens of people at one time, all in the name of disgusting systems of thought. They are willing to decimate the bodies of their community members out of fear for the takeover of people who do not look or think like them. Currently, more men are in political power in our government than women. Male leaders do not realize that they need to tackle this as more than just a gun problem – it’s a societal problem that also revolves around how we raise our boys and the rules and allowances we place on them. It’s about making our legislators understand the fact that they need to start looking at gun violence and mass killings from different perspectives.

5) The families of the victims will have to live with the consequences of white supremacy for the rest of their lives. If we refuse to take action, we will be telling these families, the first responders and the police that we as a society will continue to live on as if these shootings are not the norm. As if it doesn’t matter to us that so many human lives are lost in this country to gun violence. We need to act and stop pretending like this will not happen to us or our loved ones. The fact that this is a point of discussion is despicable. We need sensible gun reform in order to protect our children and everyday people.

Politics matters, and it affects us in very intimate ways. It’s important that we make the change, rather than let undemocratic processes and a racist, narcissistic president make those decisions for us. Because clearly, there are “good people on both sides” only when white supremacists are involved.