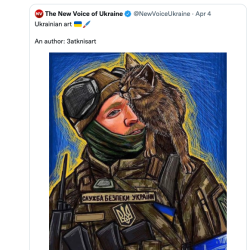 A personal brush with Russian disinformation about Ukraine

One of my favorite Twitter follows is @BodegaCats_. The feed posts adorable pictures of … wait for it … cats in bodegas. When I saw this tweet by @NewVoiceUkraine, I tweeted at @BodegaCats_ suggesting they make an exception to their “only cats in bodegas” policy because it’s such a powerful image: Someone later pointed out that the image is from […]

END_OF_DOCUMENT_TOKEN_TO_BE_REPLACED This past weekend, former Dean of the House John Dingell and his wife Congresswoman Debbie Dingell were gracious enough to participate in our Eclectafundraiser party. It’s hard to repay such generosity to a power couple like them but I’m going to try anyway. Congresswoman Dingell is in a competition with her colleagues in Congress to see who can get the […]

END_OF_DOCUMENT_TOKEN_TO_BE_REPLACED 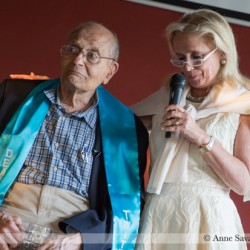 VIDEO: John Dingell named “The Dean of Twitter”, reads some of his “greatest hits” tweets LIVE at the Eclectafundraiser

Last Saturday evening, history was made when former Congressman and Dean of the House John Dingell was named “The Dean of Twitter” at the 2nd Annual Eclectablog Fundraiser Party. At the party, he was presented with a custom-made “Dean of Twitter” stole and then he read some of our favorite tweets. But, not only that. He interspersed his readings with […]

END_OF_DOCUMENT_TOKEN_TO_BE_REPLACED END_OF_DOCUMENT_TOKEN_TO_BE_REPLACED

Here are the tweets of a few of my blogging friends. We’ll have some of Anne’s awesome graphic quotes along with periodic updates during the debate, as well.

I highly commend your attention to barackobama.com/debate for lots of debate extras.

Updates will be after the jump.

END_OF_DOCUMENT_TOKEN_TO_BE_REPLACED

Romney campaign buys a trending topic on Twitter – He BOUGHT that.

Republicans have had their asses handed to them by the Obama campaign in terms of social media since 2007. We know it. They know it. Everyone knows it.

But Mitt Romney knows how to fix things like that. With money. He buys popularity. Tonight, the night of Romney’s nomination acceptance speech, one of the trending topics is #RomneyRyan2012.

He built bought that.

END_OF_DOCUMENT_TOKEN_TO_BE_REPLACED

Please RT! – @RobDelaney Apparently I’ve been waiting my whole life for Twitter. Allen Ginsberg had to roam to streets to see the best minds of his generation destroyed by madness. I do it through a retina display.And politics has been waiting for Twitter, too. Last year, Politico’s Ben Smith recognized last year that Twitter was draining the life from […]

END_OF_DOCUMENT_TOKEN_TO_BE_REPLACED

Seriously, dudes? The U.S. Freaking Secret Service??? FoxNews.com alerted the U.S. Secret Service, which is declining public comment. Jeff Misenti, vice president and general manager of Fox News Digital, said FoxNews.com was working with Twitter to address the situation as quickly as possible. Time for a new Twitter hashtag: #callinthesecretservice Here’s a couple of mine: I can’t find my beer. […]

END_OF_DOCUMENT_TOKEN_TO_BE_REPLACED

Yeeouch. Fox still hasn’t gained control over it’s Twitter stream as of 9:00 a.m. Monday morning. Check it out: foxnewspoliticsWe wish @joebiden the best of luck as our new President of the United States. In such a time of madness, there’s light at the end of tunnel BREAKING NEWS: President @BarackObama assassinated, 2 gunshot wounds have proved too much. It’s […]

END_OF_DOCUMENT_TOKEN_TO_BE_REPLACED

Apparently Rachel Maddow got at least a bit of an earful about mispronouncing my name on her show last night, calling me Electablog. (Well at least one tweet from me ;) It’s a common mistake, so, whatevs. I kinda facepalmed it, had some fun on Twitter with it and moved on. Tonight I got this tweet: I hereby submit to […]