A personal brush with Russian disinformation about Ukraine

One of my favorite Twitter follows is @BodegaCats_. The feed posts adorable pictures of … wait for it … cats in bodegas.

When I saw this tweet by @NewVoiceUkraine, I tweeted at @BodegaCats_ suggesting they make an exception to their “only cats in bodegas” policy because it’s such a powerful image: 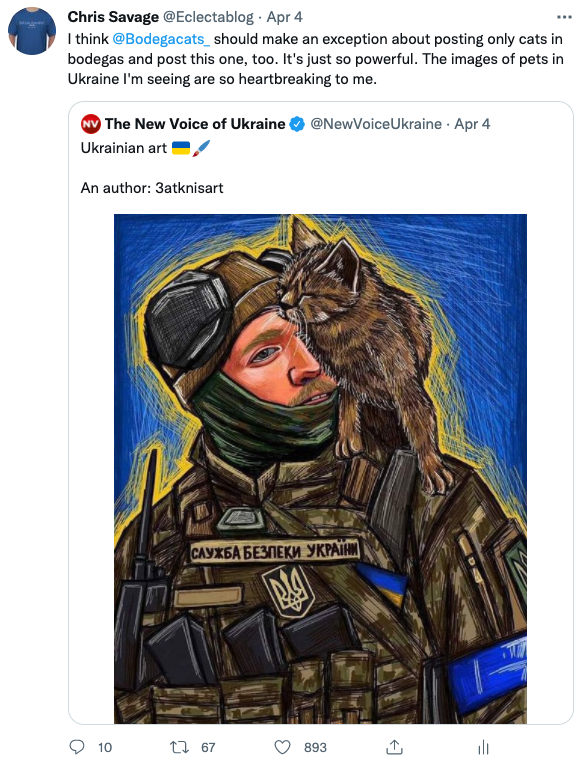 Someone later pointed out that the image is from a video posted on Twitter of a Ukranian soldier with a cat:

@BodegaCats_ did, indeed, retweet the image (actually my tweet) and it did pretty well for a tweet by me.

And then the disinformation crowd arrived. Seems they believe this image is a neo-Nazi symbol: 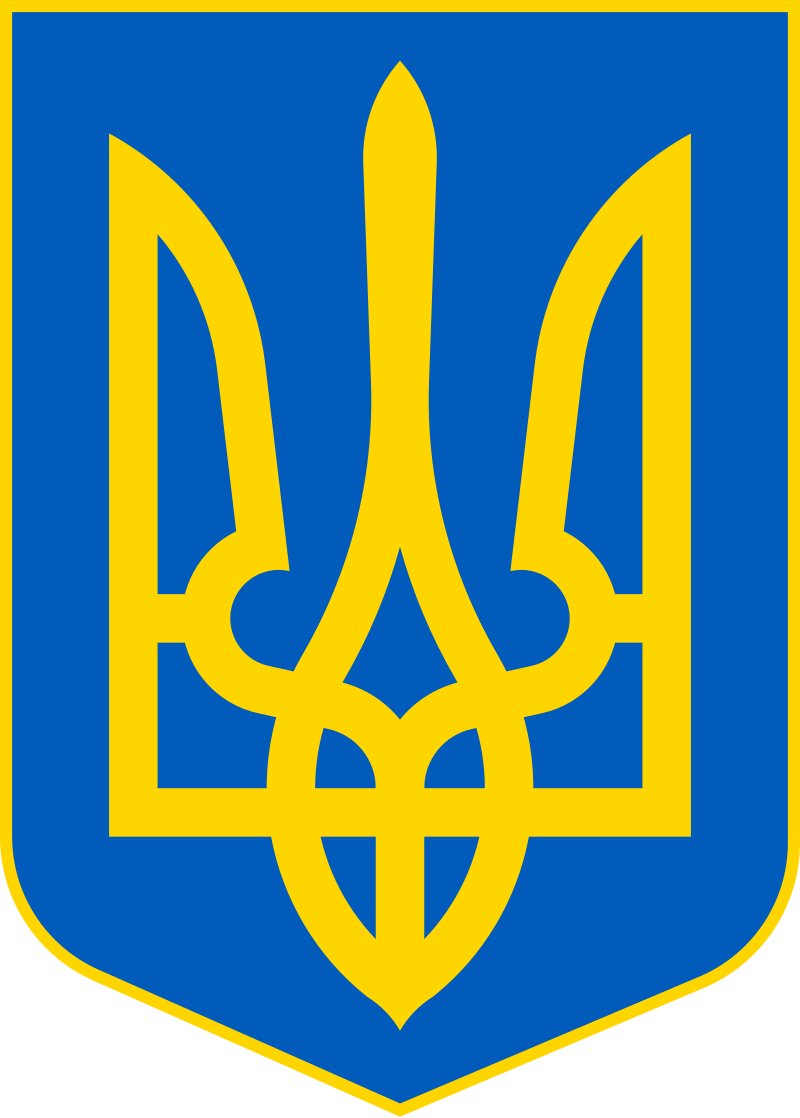 The fact is, this is not a neo-Nazi symbol at all, something that took me all of two minutes on Google to determine. It is, in fact, the Coat of Arms of Ukraine. So, it’s no surprise that a Ukrainian soldier would sport it on his uniform. In this case, the soldier has two of them; one on his chest and another on his left arm. Because some actual Ukranian neo-Nazi miscreants have displayed this image (as tattoos, generally), uninformed people jumped to the conclusion that anyone displaying it is a neo-Nazi miscreant.

Unfortunately, UK Counter Terrorism Policing included the symbol in a guide they distributed to medical staff and teachers as part of anti-extremism briefings. This prompted a demand by Embassy of Ukraine that the symbol be removed from the guide:

Placing the Trident #Tryzub, constitutional national symbol&Coat of Arms of #Ukraine, in Extremism Guide produced by @TerrorismPolice for UK teachers&medical staff is beyond outrageous. No explanations acceptable. We demand Trident to be removed from Guide with official apologies pic.twitter.com/sYbjW9yrsb

As reported by the BBC, an apology was extended:

“Unfortunately, far-right groups have a history of misappropriating national symbols as part of their identity and this is the reason why some national flags and symbols appear in our document.”

But, that hasn’t stopped a wide array of ill-informed (or, perhaps, intentionally myopic) people from continuing the lie that this is a neo-Nazi symbol, likely as a way to discredit all Ukrainian soldiers. A whole bunch of them stopped by to crap on my tweet and to spread the disinformation far and wide: 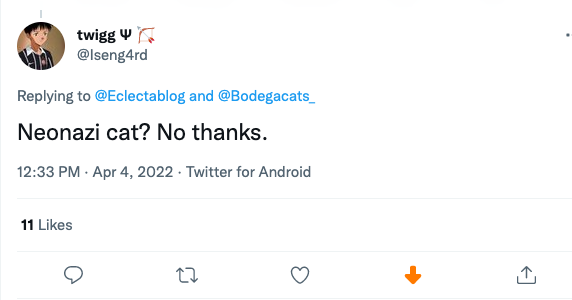 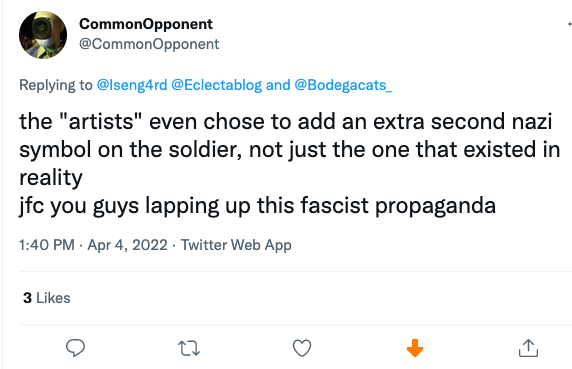 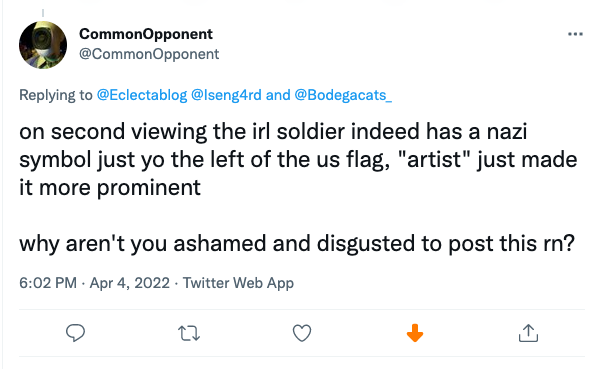 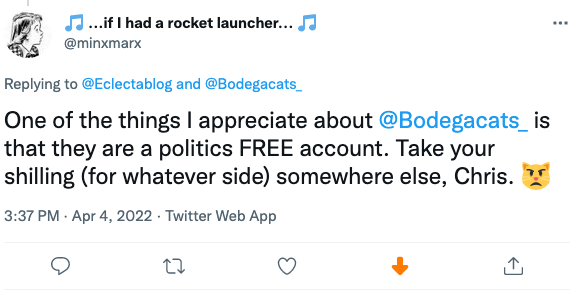 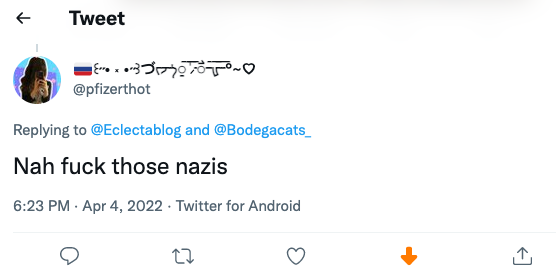 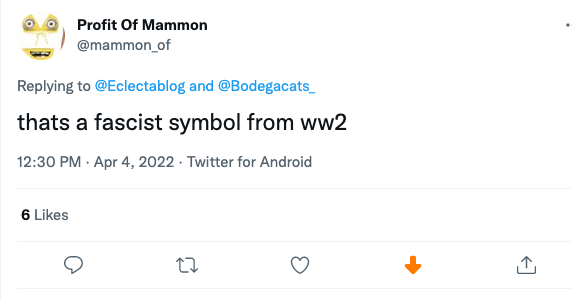 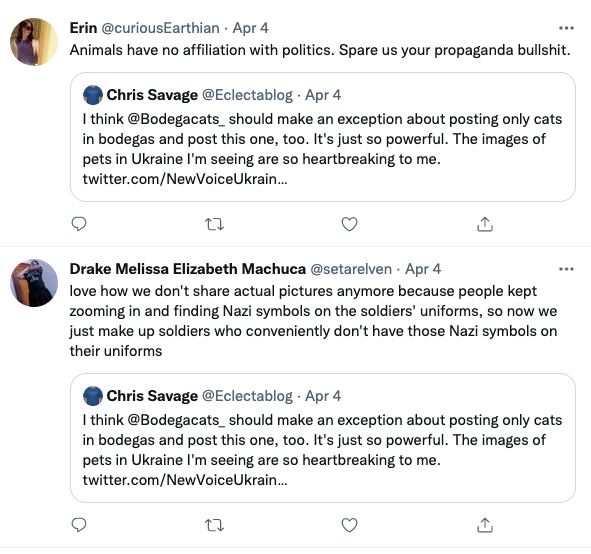 I pushed back on these ignorant tweets with facts about the symbol but not one of them was interested in the truth. They kept their disinfo tweets up and some even doubled down.

So, if you’re out in the Twitterverse (or any other internetverse for that matter), be on the look out for this type of Russian disinformation. It is ubiquitous and, in my opinion, malign. And it needs to be stamped out.