Now comes a strange request from the newest “traitor to his class,” Peter Georgescu, former chairman of Young and Rubicam, the ad and media agency. In Sunday’s New York Times, Georgescu, himself a classic American success story, makes the case for taking action to ameliorate income inequality. He warns that a failure to address the problem will result in one […]

END_OF_DOCUMENT_TOKEN_TO_BE_REPLACED

Michigan Gov. Rick Snyder has been doing a LOT of bragging this year about how Michigan is the “Comeback State”. The data, he says, “is in”. However, his presentation of the data is flawed and doesn’t tell the entire story. Yes, the number of people employed in Michigan is up since he took office. However, even though Gov. Snyder claims […]

END_OF_DOCUMENT_TOKEN_TO_BE_REPLACED

GUEST POST: Michiganders are paying more every year to clean up severe weather

The following guest post is by Sue Browne, Regional Programs Manager for the BlueGreen Alliance in Michigan. Photo by Anne C. Savage, special to Eclectablog. It’s hard to believe that last year’s bad weather cost taxpayers like you and I around $277 million in damages across the state—a $67 million increase from the year before. Had our infrastructure been better […]

END_OF_DOCUMENT_TOKEN_TO_BE_REPLACED

Woo hoo! Michigan’s unemployment rate didn’t go up! Of course, it didn’t go down either…

It’s the time of year to be thankful After going up for three straight months in a row, June through August, we now have some good news: Michigan’s unemployment rate has flat-lined at 9.0%: It’s an interesting chart. Michigan Republicans and Governor Snyder ensured us that making Michigan an anti-worker right to work (for less) state was going to create […]

END_OF_DOCUMENT_TOKEN_TO_BE_REPLACED Rick Snyder wants you to believe the employment situation in Michigan is A-OK. It’s not. Not at all.

Lies, damn lies, and statistics Photo by Anne C. Savage, special to Eclectablog Rick Snyder has embarked on a concerted effort to make you believe that he has turned Michigan’s job situation around. His latest farcical campaign centers around the fact that the number of people with jobs in Michigan is up 6.6% since 2009. Woo hoo! High five! Can […]

END_OF_DOCUMENT_TOKEN_TO_BE_REPLACED Omahgosh! Who woulda thunk it??? You are NOT going to believe this. It turns out (are you sitting down?) that the Snyder administration (I still cannot believe this is true), through the Michigan Economic Development Corporation, gave wildly inflated job creation numbers to the state legislature last spring. INORITE???! The Legislature was told April 1 that companies that received grants […]

END_OF_DOCUMENT_TOKEN_TO_BE_REPLACED

Michigan unemployment up 3 months in a row. Is it possible screwing over schools, cities, & workers isn’t working?

This must be the “great progress” Donald Trump was talking about… As I mentioned yesterday, Donald Trump was all “Heckuva job, Ricky” on Twitter a couple of days ago, complimenting Governor Snyder on Michigan’s “great progress”. I’m thinking he wasn’t aware that today the Michigan Department of Technology, Management & Budget would be announcing that, for the third month in […]

END_OF_DOCUMENT_TOKEN_TO_BE_REPLACED Michigan unemployment up 2 months in a row. At what point do we get to ask Republicans where the jobs are?

END_OF_DOCUMENT_TOKEN_TO_BE_REPLACED

Last week, the BlueGreen Alliance announced the launch of its “Repair America” campaign designed to push action on repairing crucial national infrastructure across the country and create thousands of valuable jobs in the process. The BlueGreen Alliance is a partnership of labor and environmental groups working to expand the number of jobs in the renewable energy sector. Over 100 people […]

END_OF_DOCUMENT_TOKEN_TO_BE_REPLACED 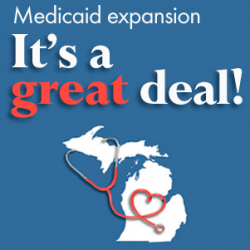 Medicaid Expansion: A Prescription for a Healthy Michigan

Michigan Republicans are the only ones who think it’s a bitter pill.

The evidence that Medicaid expansion is in the best interests of Michigan and its citizens keeps stacking up. Even Governor Rick Snyder gets it. But Michigan Republicans continue digging in their heels, trying every unsubstantiated excuse in the book to block expansion.

As I wrote here previously in a two-part series, Medicaid expansion would deliver measurable benefits to the state, insuring up to 730,000 uninsured Michiganders with the help of $1 billion in federal funding, creating 18,000 jobs and about $2.1 billion in economic activity.

Apparently, those aren’t good enough reasons for the Michigan GOP to take the money and run with a program that could boost the physical, emotional and economic health of our state.