In a move that surprises just about nobody, Governor Rick Snyder announced at press conference this morning that when anti-union Republicans send “Right to Work for Less” (RTWFL) legislation to his desk, he will sign it.

After spending the past year being coy about his position on RTWFL, it was widely suspected that he would support such legislation. With gerrymandered districts ensuring Republican dominance for the foreseeable future, the will of Michiganders as a whole is being thwarted by a cadre of drunk-with-power ideologues that have been waiting for decades to jam anti-union, anti-worker, anti-woman and pro-Big Business bills through the legislature and into law. The perfect storm of the 2010 midterm election and the redistricting that happened the following year gave them their opportunity.

END_OF_DOCUMENT_TOKEN_TO_BE_REPLACED Via my good friend Abby Clark, a photo and video from the Michigan Capitol Building this morning. It’s already full of anti-Right to Work protesters by 9:30 a.m.

As Abby puts it, “This is a nightmare that should be getting national meda attention. Michigan is the birthplace of the American middle class as we know it and it’s facing an existential threat as retribution for Proposal 2 and the results of the November 6th elections.”

Video and photo after the jump.

END_OF_DOCUMENT_TOKEN_TO_BE_REPLACED

PETITION: Unions ARE Democracy & Freedom. Stop GOP attacks on unions in Michigan, say NO to “Right to Work” for Less.

Republican attacks on labor unions are, perhaps, one of the most hypocritical positions that they have. As they hold the U.S. Constitution aloft and bow down in solemn reverence to the Declaration of Independence, they seem to forget a couple of key things.

First, our country is, at its very core, a UNION. We are the UNITED States of America. We work together for the common good of all of our citizens, at least when we’re doing it right.

Second, one of our most basic tenets, right there in the 1st Amendment, is the right to peaceably assemble.

Labor unions are one of the purest expressions of democracy and freedom in this country, a fact that is often lost in the discussion. I want to remind our legislators of this so I started a petition called “Unions ARE Democracy. Unions ARE Freedom. Stop Republican attacks on unions in Michigan, say NO to ‘Right to Work’ for Less.“

END_OF_DOCUMENT_TOKEN_TO_BE_REPLACED Details about the event and more after the jump.

END_OF_DOCUMENT_TOKEN_TO_BE_REPLACED 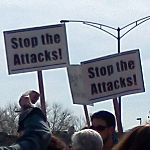 Now is not the time to rest The Michigan legislature holds its lame duck session starting today and continuing through December 20th. The Republicans who control both houses of our legislature are signaling that they intend to get a LOT done in over the next four weeks. Further efforts to destroy our labor unions, an egregious, overreaching “reform” (aka privatization) […]

END_OF_DOCUMENT_TOKEN_TO_BE_REPLACED

Warning! Warning, Will Robinson! Today, language for three different petition drives to add amendments to the Michigan constitution received the okay from the state elections panel. One would give home health care workers collective bargaining rights. Another would add specific phrases from the Declaration of Independence to the state Constitution. The third is the petition for the Protect Our Jobs […]

END_OF_DOCUMENT_TOKEN_TO_BE_REPLACED

What’s the polite phrase for “dick move”? This past week, Michigan Republicans passed House Bill 4929 that prohibits school districts from doing automatic deductions from teachers’ paychecks to pay for their union dues. It was touted as a cost-saving measure by some. How much will it save? See, that’s the thing: Nothing. According to the most recent Senate Fiscal Analysis: […]

END_OF_DOCUMENT_TOKEN_TO_BE_REPLACED

And they call Obama “elitist”? Today, in a Detroit News op-ed titled “Taxpayers should get GM shares’ proceeds”, Mitt Romney doubled down on his previous New York Times editorial in which he declared the Obama administration should have let the auto industry perish. From the NYT piece “Let Detroit Go Bankrupt”: IF General Motors, Ford and Chrysler get the bailout […]

END_OF_DOCUMENT_TOKEN_TO_BE_REPLACED

You know what I hate? I positively detest the phrase “union thugs” or “union goons”. It implies this organized group of people willing to harm others to make sure they get their way. When you look at what Republicans are doing to unionized teachers in Michigan, you realize that when Senate Majority Floor Leader Arlan Meekhof says making our state […]

END_OF_DOCUMENT_TOKEN_TO_BE_REPLACED

Last month, I wrote about how the Northville School District was using the threat of an Emergency Manager to strong arm concessions from teachers in their contract negotiations. Snyder’s budget strips away money from the schools. The schools are forced into a bankruptcy situation. They turn to their employees and teachers for drastic concessions (a nearly 10% pay cut and […]