Michigan Republicans make it crystal clear: They are on TEAM COVID 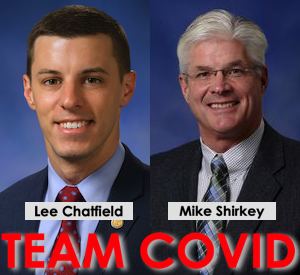 On May 6th, Michigan Republicans sued Governor Gretchen Whitmer to prevent her from taking action to protect Michigan residents from a rampaging coronavirus which causes the all-too frequently fatal COVID-19. By October, the Republican-led state supreme court agreed with them and ended her emergency powers just as another wave of COVID-19 infections was beginning to appear.

Since then, Gov. Whitmer has continued to take what steps she can to protect Michiganders but she has faced ferocious opposition from Republicans who have spent the enter time demonizing sensible, science-driven restrictions and mandates as an affront to “freedom” and “patriotism”, riling up their supporters into a frothy, anti-Democratic lather. Their endgame is unclear but the result was predictable: Domestic terrorists — unauthorized militants — hatched a plan to kidnap Gov. Whitmer, conduct a public “trial”, and then assassinate her for doing her job.

But it’s not just their rhetoric that has spawned this twisted plan to murder our governor. Senate Majority Leader was actually photographed chatting with protesters in the gallery of the senate at the same protest where two of the arrested terrorists were photographed carrying weapons in the same gallery by Democratic Senator Dayna Polehanki:

Republicans control both houses of the legislature and have taken no actions whatsoever on stopping the pandemic’s spread in the month and a half since the supreme court ruled in their favor. Then, last week, Republican leaders left observers gobsmacked as they cancelled their last session “due to a lack of time sensitive issues necessitating a need for meeting” and went on vacation until December without taking action. This is despite constant bleating from Republicans that Gov. Whitmer, who they continuously portray as an evil dictator, won’t work with them.

Yesterday, Gov. Whitmer stepped up once again to be the adult in the room, a room Republicans slinked out of last week. She took decisive action to help halt the spread of this terrifying virus. This graphic shows the steps she took: 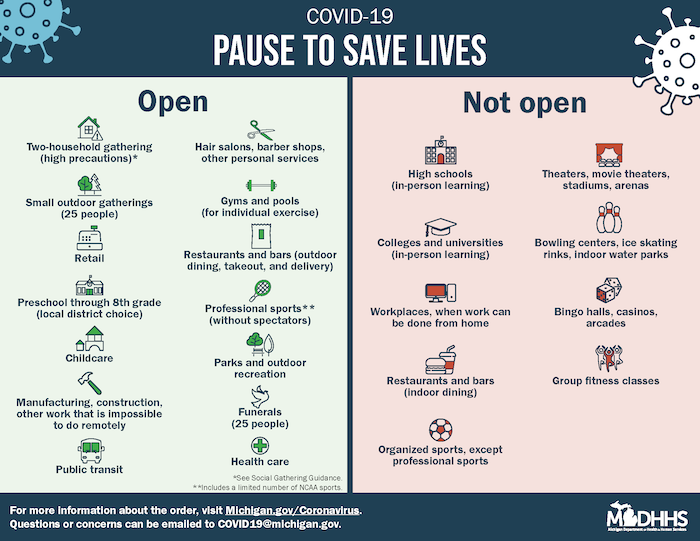 Right on cue, Sen. Shirkey emerged from his vacation to throw poo at these important, life-saving measures:

The health and safety of our communities is our top priority. The Senate Republicans have been engaged in thoughtful conversations with our doctors, hospitals, and the Whitmer administration on ways to combat the spread of this insidious virus and help support our healthcare workers. While were [sic] meeting in good faith, Gov. Whitmer was working on her own strategy that did not include input from the Senate Republicans and we see the result of her plans in this latest round of restrictions.”

The Senate Republicans still have faith in our fellow citizens and encourage them to protect themselves and others by adhering to the practices we know can help combat the spread of this insidious virus: washing hands, maintaining distance, and wearing a mask when it’s appropriate.

“We are disappointed that Gov. Whitmer chose to go it alone, again. The Senate Republicans will continue working with our doctors and the medical community on ways we can combat this virus and are ready to work with the Governor when she decides to work as a team to fight this virus,” said Shirkey.

So, to summarize, Republicans convinced their followers that the coronavirus pandemic was not a big deal and that any efforts to prevent its spread were not critical, life-saving measures but, instead, were the despotic acts of a self-appointed authoritarian governor. They then went to court to reverse the actions she had taken. This was followed by a surge in cases — a surge that is overwhelming hospitals around the state — that was not only predictable but also actually predicted. Instead of actually doing something about this, they dithered for a month and a half while whining about the governor not coddling them, and then went on vacation for weeks in the middle of the pandemic’s surge. Finally, now that the governor has taken the actions they themselves did not have the courage to take, they sit on the sidelines making shitty comments. One of them is actually calling for her to be “impeached”:

This morning, the Governor's Office issued a response to the call for impeachment hearings against Gov. Gretchen Whitmer.

Here’s the reality: Michigan Republicans have painted themselves into a corner when it comes to their response to the spreading coronavirus pandemic. They have spent most of this year demonizing Gov. Whitmer and calling her actions an affront to “freedom”. Now that things are getting seriously and terrifyingly bad again, they have left themselves no options unless they want to be seen as betraying all of the people they have worked up into that anti-Democratic, frothy lather.

We elect our leaders to protect us and help make our lives better. You can’t do that and be on TEAM COVID at the same time.

UPDATE: Doctors are calling BS on Shirkey’s contention that his caucus is “working with our doctors and the medical community”:

Mike, as a member of the medical community you claim you are working with, we don’t see you. One phone call with our CMOs does not constitute working with us. We have told you we are in trouble but you decided that the pandemic was a good time to take a vacation.