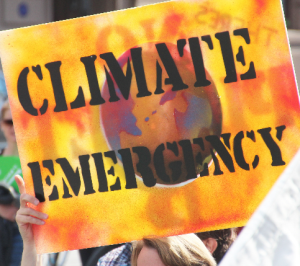 As I have been saying on this site and on our podcast for over two years, all of the chaff created by Donald Trump’s reckless chaos is masking the long-term damage he’s doing to our country and our planet. While we worry he’s violating the Emoluments Clause or being the Racist in Chief, his administration is inexorably undoing nearly every environmental protection we have in place in the United States.

However, much of what he has done so far pales in comparison to what he has planned next.

This week, Trump’s Environmental Protection Agency announced it is seeking to roll back emission limits on methane. This is absolutely devastating because methane is EIGHTY TIMES MORE POTENT A GREENHOUSE GAS THAN CARBON DIOXIDE:

On a time scale of 20 years, methane is more than 80 times as powerful as the same amount of carbon dioxide, David Doniger, the senior strategic director for the climate and clean energy program at the advocacy non-profit the Natural Resources Defense Council (NRDC), tells TIME.

You might think the nation’s largest oil and gas companies would be rejoicing over this move but, as it turns out, they’re not:

[S]everal of the biggest oil and gas companies have called on the Trump administration to tighten restrictions on methane, not loosen them. It was smaller companies that had sought the weakening of the rules, arguing that leak inspections were too costly.

Why are the Big Oil companies coming to the defense of the planet? Well, they obviously want to keep out smaller companies for whom these costs of doing business are a bigger percentage of their operation. But they also want to be sure that their investments in natural gas are protected:

Larger energy companies have invested millions of dollars to promote natural gas as a cleaner option than coal in the nation’s power plants, because natural gas produces about half as much carbon dioxide when burned. They fear that unrestricted leaks of methane could undermine that marketing message, hurting demand.

In their “fact sheet” on the proposed policy, the EPA says the move will save the oil and natural gas industry “$17 million and $19 million a year”. That’s a tiny fraction, less than 0.02%, in fact, of their annual revenues. But with a climate change champion like Trump in office, it’s not the savings that matter, it’s the principle: he doesn’t want ANY company to lose ANY amount of profit to save our planet from human caused warming and the catastrophic impacts we’ll suffer from that.

There will be a 60-day comment period in the near where the EPA will be asking for comments specifically on these items (again, from the fact sheet):

I will post again with more information when the commentary period opens.