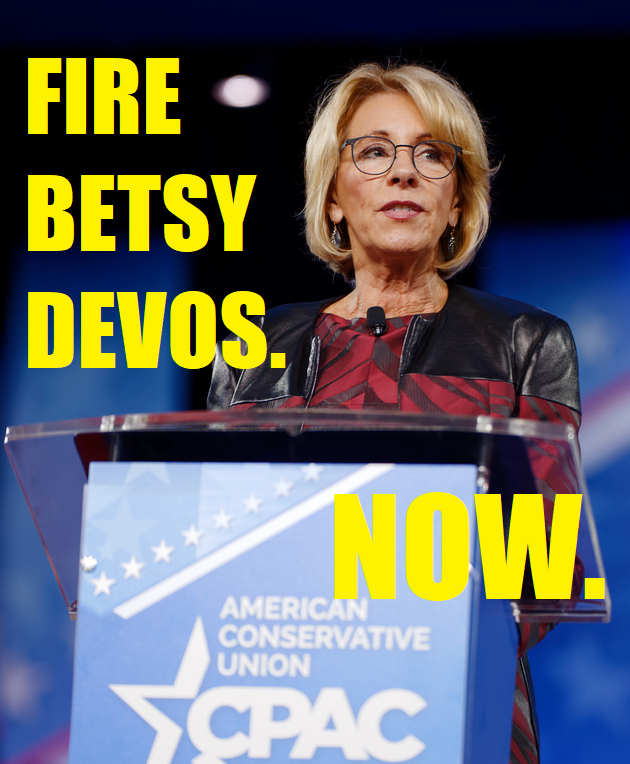 Betsy Devos has done it again. On August 29th, the Department of Education sent a letter to the Consortium for Middle East Studies departments at the University of North Carolina and Duke University, claiming that the program “disproportionately portrays ‘the positive aspects of Islam'”. They threatened that if the schools do not make amendments to the program by September 22nd, they could lose their federal grant.

What this shows us first and foremost is that the Trump administration has never held a positive view of Islam to begin with, nor of the millions of people who follow the faith. It’s very rare that we hear positive portrayals of Islam in academic settings or in the media. And where higher education institutions have started to take it upon themselves to revise their curricula to be more inclusive and diverse, Betsy Devos is doing everything in her power to continue to proliferate discrimination both in schools and beyond.

Betsy Devos is no fool. She understands the importance of education and the role it plays in shaping students. She knows that in ensuring that schools perpetuate a negative view of Islam, students (especially white students) have little opportunity to open their eyes to the vision of society that many people of color fight for continuously. It’s a society that would allow them to feel as though their worth is the worth of those who have traditionally held power at all levels. It’s a society that would free them from the judgmental stares, microaggressions, and overt racism and discrimination they face everyday.

And don’t forget about the Muslim students who have enrolled in these programs – the federal government is telling them that no matter what they do, they are going to be viewed as a threat because of their religious beliefs. If this goes through, they are going to have to continue to read textbooks that question their morals. When they take tests, they are going to have to respond with answers that don’t ring true to their core experiences in life, because the federal government sees them as a threat to the cultural purity of America.

It’s also quite telling that the Trump administration has pointed out what they believe to be incorrect when it comes to one program, but has done nothing to repair the blatant falsehoods and the contortion of information in history curricula. At both the K-12 level all as well as at higher education institutions, we see the history of slavery and colonialism being watered down. Students are taught that slaves were in fact “workers”. Students are taught that Columbus was an incredible explorer who founded America, and books conveniently leave out the fact that he destroyed Native American lives. Betsy Devos is focusing on demeriting Islam, but is not working to ensure that growing minds understand the realities of the history that affects so many people to this day.

Ever since the Nazi protests at Charlottesville over two years ago, there have been slight changes in the portrayal of Thomas Jefferson’s role in the founding of the United States and the University of Virginia in the classroom. At Monticello, Thomas Jefferson’s home and plantation, the tour and the film screening originally did very little to describe the hardships of slaves at those plantations. It was only after the rally that Monticello began incorporating these truths into their tour. I was lucky in that my American Politics professor would present us all aspects of Thomas Jefferson’s life, and did not simply perpetuate this notion that he was a purely heroic figure in our history. That was not necessarily the case with many of the courses taught at the university and there were certainly reminders of the dark past in the very architecture and bricks that people walked by and stood on everyday on their way to class.

All this to say that some educational institutions are finally starting to grapple with how to explore our history in the most holistic fashion possible. They are looking at pushing for a teaching and learning style that questions our very understanding of what we have been taught in the past, and more diverse voices are leading the conversations about the histories that had earlier been repressed. While it’s still not perfect, it’s a step in the right direction.

What we don’t need is a Betsy Devos to take us back. She is intentionally undoing much of the work that the programs at UNC and Duke are trying to accomplish. Where faculty and students are trying to right wrongs and encourage students to fight for injustice, she is working for a man who cringes at the thought of allowing people of color to thrive.