The first democratic presidential primary debates took place this past week in Miami, Florida over the course of two nights. Twenty out of twenty three candidates qualified to stand on the debate stage, and ten candidates stood each night (we seriously have to work on pushing some people out of this race). On the first debate night, moderators Chuck Todd and Rachel Maddow asked candidates what they would do about Mitch McConnell in the event that he maintained his position as Senate Majority Leader after the 2020 elections. Elizabeth Warren, who always has a plan, stumbled. It was only after the debates that she would try and take the filibuster away him. 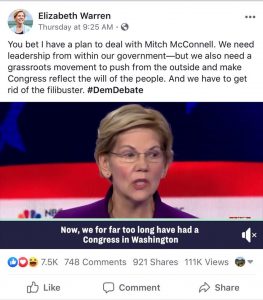 But the truth is that no candidate had a proper answer. This was both supremely disappointing and, quite frankly, worrisome. On the second night, the moderators did not even bother to ask the question. The assumption seems to be that, while Trump may be beaten, McConnell is untouchable. But why didn’t Todd ask the candidates about their plans to help progressive Senate candidates win in 2020?

I understand that it’s extremely difficult to ask ten separate candidates all the questions you want on every single policy issue within two hours, but what’s important to recognize is that a Democrat winning the presidency in 2020 means nothing if he/she can’t pass any legislation. Presidential candidates can talk all day about their agendas and how they are going to fix Trump’s mess, but the Senate is controlled by Republicans and ruled by Mitch McConnell. Trumpian Republicans are going to continue to block progressive policies that will protect and uplift the American people — unless we take matters into our own hands.

It’s about time that the Democratic Party put its energy into flipping the Senate. The ideal outcome would be that Democrats can find a candidate to run against McConnell in 2020 and completely end his career in politics. At minimum, we should win the Senate so that we can lessen McConnell’s influence and he gets demoted to Senate Minority Leader. Trump is just one bad actor existing within larger frameworks of injustice, oppression, and unfairness in the American political framework. Beating Trump is just the start. Winning the Senate and keeping the House should be a crucial part of the agenda for Democrats in 2020, because Congress is ultimately going to be making the decisions on which bills go to a vote and which policies eventually become law.

And just in case anyone’s forgotten who McConnell truly is, look at what he had to say when asked about reparations:

I don’t think reparations for something that happened 150 years ago for whom none of us currently living are responsible is a good idea…We’ve tried to deal with our original sin of slavery by fighting a civil war, by passing landmark civil rights legislation. We elected an African American president.

This is the same McConnell who blocked Obama’s Supreme Court nomination and who was determined to make Obama a one-term president. This is the same McConnell who has done nothing to keep families together as they are seeking asylum in this country and who supports Trump at every opportunity. Also check this NPR politics podcast for more information on McConnell’s career and how he’s managed to stay in power for so long despite his incredibly low approval ratings. He’s quite the scoundrel.

There is currently no candidate who has been willing to take on McConnell. He’s an incredibly effective fundraiser and doesn’t play by the rules, so it’s understandably a difficult task to take on for anyone who’s even considering a run. But the Democratic Party needs to wake up, recruit a strong candidate, and provide them all the support they need to win (while sticking to their values, of course).

In the meantime, we should be aware that we need to take up 4 seats to win the Senate over. There are some Senate races we should be keeping an eye on: Jaime Harrison is running against Lindsey Graham (R-SC), and Sara Gideon is running against Susan Collins (R-ME). Both Republican Senators who voted yes to confirm Brett Kavanagh for Supreme Court are up for re-election, so please donate to their competitors if you can. There are also some Democratic seats we should be defending. Gary Peters (D-MI) is up against John James and pedophile Roy Moore is looking to run AGAIN against Doug Jones (D-AL) who won in the special elections in 2018.

These are, of course, just a few examples, but we need to make sure we are doing everything in our power to support these candidates so we can flip the Senate, even if we can’t get rid of McConnell. And while we may not necessarily agree with every aspect of these Democrats’ candidacy or their voting record, we already know that they are going to be much better than the Republican alternatives. It’s time to win.