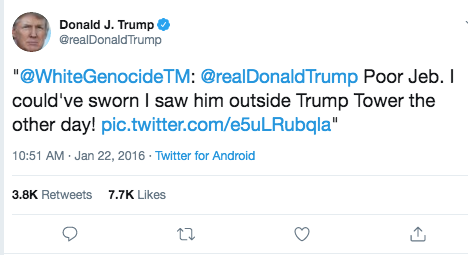 If you want to know what the gravestone of American democracy might say, consider this recent Vice headline:

Why Won’t Twitter Treat White Supremacy Like ISIS? Because It Would Mean Banning Some Republican Politicians Too.

Possibly in response to this embarrassing admission and the obvious failure to successfully delouse one of the platforms most responsible for the spread of Measles and Donald Trump, Facebook actually banned a few of the worst and most bigoted misinformers on the planet this week.

This upset the big baby birther. He vowed — with the full weight of the executive branch — to watch the situation.

This may just seem like random ranting and distraction. But this intimidation is actually key to Trump’s 2020 campaign, as Judd Legum points out in this important thread.

Because of Judd’s work for his Popular.info newsletter, many of the Trump campaign’s recent ads have been taken down. Trump is already spending $500,000 a week on Facebook, which GOTMFV show guest Laura Olin called “the new Fox News.”

Judd explained, “He needs to be a VICTIM of Facebook censorship so that it’s IMPOSSIBLE for Facebook to enforce their own rules.”

I’ve been thinking a lot about this Stephanie Mencimer piece: “The Left Can’t Meme”: How Right-Wing Groups Are Training the Next Generation of Social Media Warriors.

It led me to this piece about “Memetic Warfare” by Jeff Giesea, which was extremely important to the Trump 2020 campaign’s social media strategy. It advised beating ISIS with trolling, using denigrating ridicule along with direct harassment. He was credited with helping creating Trump’s troll army and his tactics were either mirrored or embraced by the large-scale Russian-back effort to do the same thing.

Giesea is now furious at the Trump campaign for not taking Facebook’s attempt to take control of its platform more seriously. He’s been ahead of the curve again in recognizing that so-called “de-platforming” is the biggest risk to the right and Trump. He believes Trump should be using his executive power even more to intimidate or possibly even take action against platforms that put up guardrails that limit the right.

Giesea even has a plan that would handcuff large social media platforms that you should expect Trump fans and then Trump to embrace.

We know Trump that this week essentially invited Putin to replicate the “help” Russia offered to him in 2016. A large chunk of that help involved not just promoting Trump but aggravating racial animus over social media.

The boundaries between casual racism and neo-Nazism are being intentionally blurred on social media and when Trump again defends his Charlottesville comments. The goal is to stake out maximalist demands that would prevent these platforms from enforcing any content restrictions.

By defending the most extreme extremists Trump isn’t making any stand for free speech, which we know he’d crush the moment he can get away with it. He’s trying to make sure the extremism and lies he needs to run on 2020 cannot be checked.