Trump did his best to wink at neo-Nazis let him know he values their support. And his defenders are doing the same.

On Friday, Donald Trump again defended his need to praise the people who marched with neo-Nazis and members of the Klan a few days after a neo-Nazi killed a woman in Charlottesville, Virginia in 2017.

He’s gleefully buying in on Dilbert Scott Adam’s effort to gaslight America out of believing what we all saw with out own eyes.

As Vox’s Jane Coaston wrote in one of the most effective dissections of this filthy effort, “Unite the Right was a horrific event in our nation’s recent history — and to come to terms with it requires doing so in good faith and honesty, something the president and his defenders appear unwilling to do.”

About 24 hour after Trump’s latest defense of his defense of neo-Nazi rally, we saw the second synagogue shooting committed by a racist echoing the antisemitic tropes often spread by Donald Trump of this presidency.

Both of these racists were obsessed with immigration, which I hear Donald Trump also has some opinions on (that aren’t actually reflected in his actual business practices).

Trump didn’t invent the GOP tactic of using dog whistles that enthrall racists but offer everyone else plausible deniability, as Ian Haney Lopez’s excellent book will tell you.

But Trump is pioneering an effort to expressly mainstream some of the most hateful and potentially violent people in this country, in part because their policies are his policies and in part because they’re particularly good at using the internet. Young Republicans are going extinct. The ones that do exist pride themselves on being able to “meme.” That often means being able to use shock value in place of humor. And online racists are online racists largely for the joy of shock. And it’s so easy to do that even Russian trolls pick it right up.

The synagogue shooters did not identify as Trump fans but their online homes were filled with Trump supporters, who seem to love the way this man pushes the bounds of what’s acceptable to places that may inspire violence. Trump continually nods to the need for violence either committed by the state, as he wishes aloud that the army would start shooting over the border, or by his fans to support him. The man literally applauded an attack against a journalist.

Trump and his friends who are trying to defend defending neo-Nazis are carefully parsing Trump’s words to escape the obvious thing Trump did in his comments about Charlottesville — give comfort to extremists.

“Unite the Right was explicitly organized and branded as a far-right, racist, and white supremacist event by far-right racist white supremacists,” Coaston wrote. “This was clear for months before the march actually occurred. So by casting the rally instead as a sort of spontaneous outpouring from Confederate statue enthusiasts, Trump is rewriting history.”

Here’s a goddamned poster from the event: 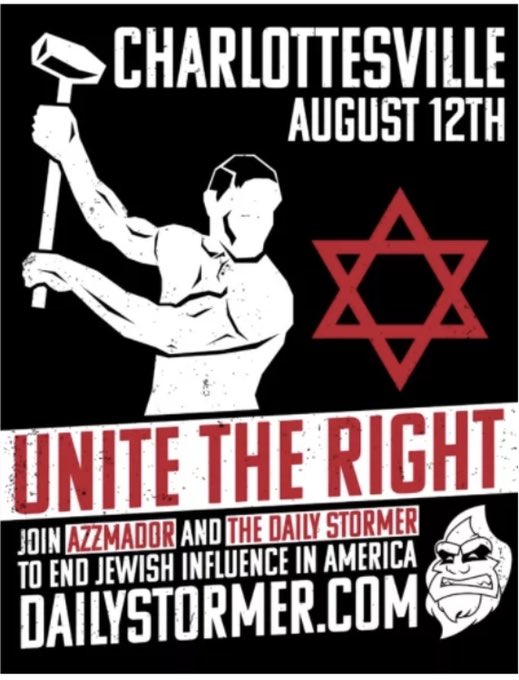 You’re defending marching with people who were marching under that banner. And even if you say you’re doing it to defend Robert E. Lee, because the Lost Cause myth has made it acceptable to most white people to defend a slave-owning traitor, you could have done that any other weekend without putting your numbers behind guys who chanted “Jews will not replace us!”

I don’t know many or any Jews or people of color who would have joined that march.

Everybody knows what Trump was up to, but that’s the game. They want Trump to get away with it. They want people of color and Jews to look hysterical when they point out the obvious racism of birtherism and Trump’s birther policies. They want to blur the lines of accountability so that the anger of the right is always justified and immune from responsibility.

And by doing it, they are defending neo-Nazis, inviting theses racists to find more ways to confound us with the subtle, deniable support of the president of the United States.