It’s not just Michigan: Betsy DeVos and the Koch brothers have immiserated teachers across the entire USA

A couple of weeks ago, I published an essay titled Betsy DeVos and the Koch brothers must be so proud: Michigan teacher salaries down 16% from 2009. The title is pretty self-explanatory and the bottom line is that there is a very predictable (and predicted) teacher shortage in our state now because of how we have demonized, diminished, and demeaned teachers and their profession to the point where fewer and fewer people want to enter the field of education. As I have said in the past, “a society that devalues its educators is destined to slowly circle the drain until it glugs down into an empty, fetid tub of ignorance and stupidity. It’s not possible for a society to excel or to compete on the world stage when its children are educated by people who are treated as if they are parasites.”

It turns out that Betsy DeVos and Charles & David Koch have more to be proud about than the immiseration of Michigan teachers. As it turns out, it’s happening all across the country. A new report out by the Economic Policy Institute titled The teacher weekly wage penalty hit 21.4 percent in 2018, a record high makes it quite clear the American teachers are being derogated everywhere.

What they found in their study regarding teachers’ “wage penalty” — the difference in wages for teachers relative to other professions — is shocking and depressing:

In case you’re thinking that the Bush Recession has a role to play, it doesn’t:

The erosion of teacher weekly wages relative to weekly wages of other college graduates in the last couple of years—and in fact since 2008—reflects state policy decisions rather than the result of revenue challenges brought on by the Great Recession. A recent study (AFT 2018) found that most of the 25 states that were still spending less for K–12 education in 2016 than before the recession had also enacted tax cuts between 2008 and 2016.

In fact, eight of the 10 states with the largest reductions in education funding since 2008 were states that had reduced their overall “tax effort”—meaning through tax cuts or other measures they were collecting less in taxes relative to their capacity to generate tax revenue. These eight states were Alabama, Arizona, Florida, Georgia, Idaho, Kansas, Oklahoma, and Virginia.

In 2016, 24 states still had total state/local per-student funding below pre-recession levels. Among the eight states with the deepest cuts were three featuring teacher protests in 2018: Oklahoma, North Carolina, and Arizona (tied with Florida for the biggest cuts, at 23 percent).

Here are a couple of charts that show the trends over the past couple of decades: 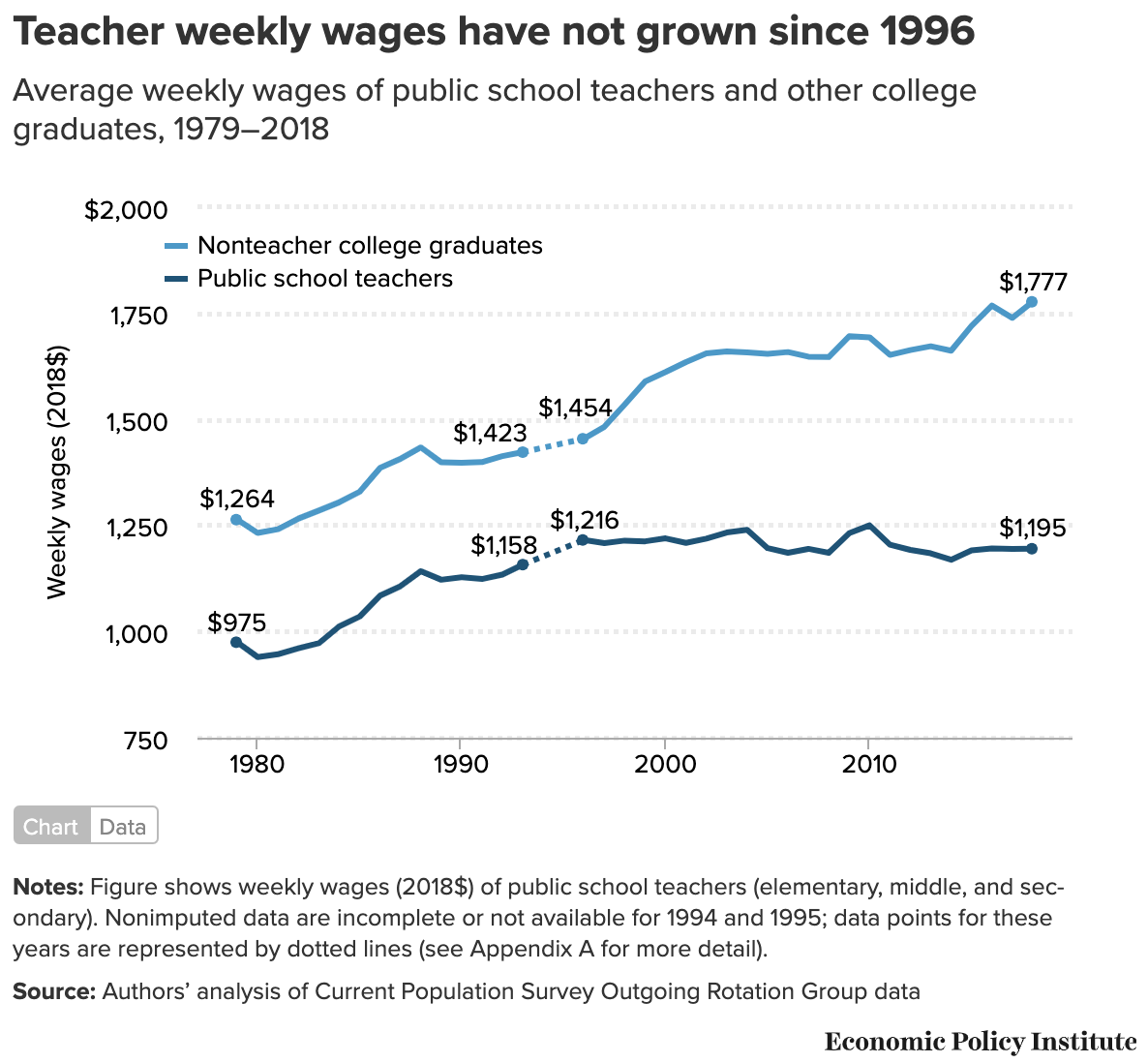 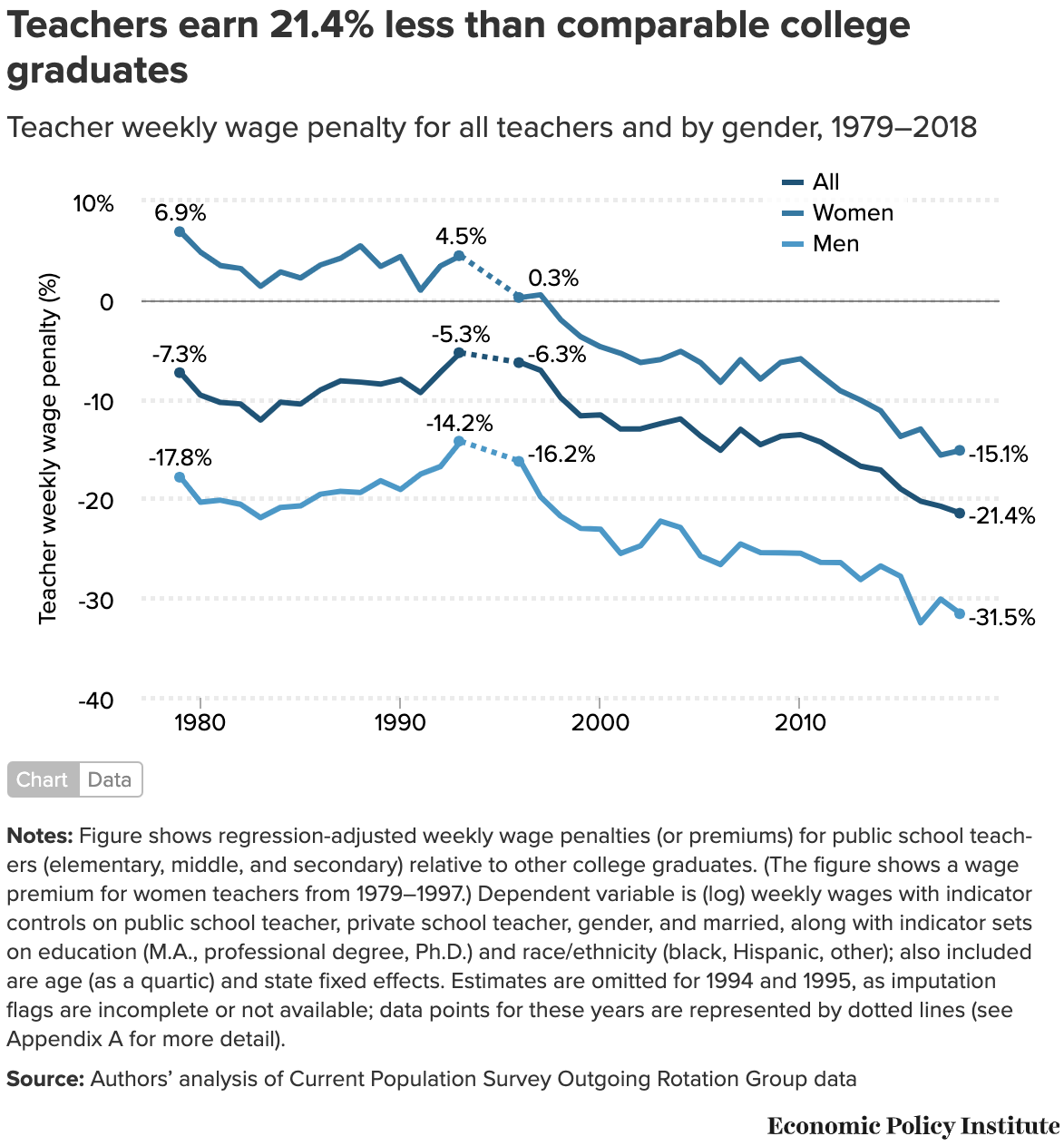 This is clearly not a sustainable situation. If we really value the education of our children, we must begin to compensate teachers as if we do. The alternative is that we will begin to lower our standards for teachers until we have largely unqualified people in our classrooms. This is, in fact, already happening. If we relegate education to people who don’t have the proper training, we will doom America to a future where only children in wealthy families are educated properly and the rest of our kids receive substandard education.

I’ll finish with a larger snippet of the quote in the first paragraph of this post because, rereading it, it still strikes me as accurate eight years later:

In any rational society, teachers are not considered “costs”. They are considered assets. Something to be valued. Something to be rewarded. The Republicans have done an amazingly effective job of turning the public’s perception from seeing teachers as a valuable asset to seeing them as parasitic leeches on the jugular vein of society. Rather than valuing them for the important role they play in our society — that of educating our children — they are now coming to be viewed as a “cost”, something to be cut when times get hard.

We have cut their pay, increase the amount they pay for healthcare, reduce their retirement benefits and make it nearly impossible to bargain on their own behalf. And yet we expect them to effectively educate our children. We do this to help pay for massive tax cuts for businesses. And then we expect them to come to work each day, stand in front of the next generation of leaders and scientists and parents and doctors and trash collectors and make them ready to take their place in society.

Meanwhile, we scream collectively that our schools are failing our children.

I’m not sure how doing all of the things we are doing to our teachers constitutes “making our schools better”… What I do know is that a society that devalues its educators is destined to slowly circle the drain until it glugs down into an empty, fetid tub of ignorance and stupidity. It’s not possible for a society to excel or to compete on the world stage when its children are educated by people who are treated as if they are parasites.