Betsy DeVos and the Koch brothers must be so proud: Michigan teacher salaries down 16% from 2009

It’s taken years of concerted effort but, at long last, Betsy DeVos and the Koch brothers can finally claim victory: Teachers in Michigan are now paid less today in both real and corrected-for-inflations dollars. In 2009, the average teacher salary in our state was $63,025. In 2017, the most recent year for which we have data, the average was only $61,908. Adjusted for inflation, that’s a whopping 16% drop in just 8 years.

What happened between 2009 when the country was just emerging from the worse economic castastrophe since the Great Depression and 2017 when the economy had been on an upward climb since President Obama took office? Well, Michigan voters elected a governor who mistakenly believed he could run a state government like a business and a state legislature that was gerrymander-packed with anti-union corporatists who passed a massive tax cut for corporations, took billions of dollars from school funding, and spent enormous amounts of energy demeaning teachers by blaming them for poor educational outcomes that were the result of elements completely out of control (poverty, education disinvestment, and parental disengagement, for example.) 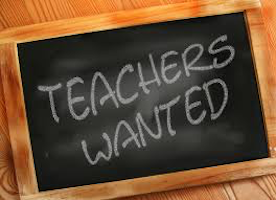 So now that the corporatist “education reformers” have gotten their way, putting teachers in their place by reducing their pay and slashing their benefits, things must be humming along pretty well, right? Actually, not so much. As anyone with a couple of brain cells to bang together could have predicted, Michigan now faces a teacher shortage:

Michigan is battling a persistent shortage of teachers early in the school year, prompting school district leaders to scramble to fill their vacancies while fearing the problem might only get worse.

From the Upper Peninsula to Metro Detroit, job postings for K-12 positions across the state advertise hundreds of open positions from foreign language, music, science and math teachers to paraprofessionals to counselors.

Detroit Public Schools Community District, one of the most challenged districts in the state, had 90 teacher vacancies at the beginning of the school year last September. That was down from over 200 at the beginning of the summer. But Detroit isn’t the only district dealing with the predictable outcome of corporatist, anti-public school policies. Schools in Grand Rapids, the home of U.S. Education Secretary Betsy DeVos, had 40 vacancies as of February.

Chandra Madaferri, vice president of the Michigan Education Association, explains that it’s not just salaries that are driving teachers out of their chosen profession:

Madaferri says not only were millions cut from public education around 2011, but there was also a lot of legislation passed that increased the use of standardized tests, and more testing means more pressure for teachers. She explains that’s when she felt she was losing her academic freedom, and more pressure for lower pay is becoming less and less appealing for potential teachers of the future.

“There’s been a 50 percent reduction in students choosing to become a teacher because people are saying don’t do it,” Madaferri said.

Local numbers show it’s true. According to data we received from Grand Valley State University, undergrads enrolling at GVSU’s School of Education dropped by nearly 400 students in the past five years.

Although Democrats have tried to do something to alleviate the problem, Republicans in our state legislature made sure that didn’t happen:

[State Senator Winnie] Brinks says Michigan Democrats introduced a package of bills during the last legislative session in an effort to help teachers. Some of the solutions in the bills include:

Brinks says the Republican committee chairs refused to hold a hearing on the bills.

You may ask why I bring up Betsy DeVos and the Koch brothers in this post. It’s because they have led the way in making sure that public schools have fewer and fewer resources by promoting for-profit charter schools and by demonizing teachers as lazy and greedy for wanting a decent wage, competitive benefits, and the ability to retire with dignity after spending their careers in what is one of the most noble professions in modern society.

The Mackinac Center routinely does open records requests and then publishes the salaries of teachers around the state, as if making a decent wage as an educator is something to be ashamed of. They also promote policies that diminish the ability of teachers to bargain collectively for their wages, benefits, and working conditions.

Once Rick Snyder and the corporatists rolled into power in 2011, they cut education funding to pay for corporate tax cuts and passed right to work legislation. It will come as no surprise that Snyder once said that he kept the Mackinac Center’s “101 Recommendations to Revitalize Michigan” “on his desk and refers to it often”. The Mackinac Center is one of the largest members of the Koch brothers’ State Policy Network, a national organization that promotes the interests of corporations under the guise of fiscal conservatism.

But the fine corporate shills at the Mackinac Center don’t stop at just destroying public schools and demonizing teachers. Every year since they passed right to work, the Mackinac Center has undertaken a coordinated effort to encourage teachers to leave their unions, effectively urging them to slit their own economic throats.

So, here we are in 2019, living with the predictable (and predicted) outcome of teachers departing their profession and our state dealing with a shortage of qualified educators. But, have no fear, Republicans have a plan for that, too: lower the requirements for teaching. In 2017 they passed a law allowing for teachers to receive their teaching certificate WHILE ACTUALLY TEACHING STUDENTS IN THE CLASSROOM and to do it all online. In 2018, they eliminated the requirement that teachers who take this route to become certified must take and pass the SAT.

In other words, under the “leadership” of Republicans, education in our state is in serious trouble.