The desperation is palpable

An out-of-state group known as the “Judicial Crisis Network” is spending $1 million in Michigan to attack Supreme Court front-runner Bridget McCormack. After you read my interview with her HERE, you’ll quickly realize that she’s a candidate perfectly suited for the Supreme Court. The now-viral West Wing ad released by her campaign gave her name recognition not usually seen with candidates for the bench. As I said in my interview, she’s the real deal, running a real campaign and she’s going to win.

However, that’s only true if we get out the vote for her, along with Connie Marie Kelley (interview HERE) and Shelia Johnson (interview HERE.) The most recent Detroit Free Press poll shows that an astonishing 75% or more of Michigan voters are undecided in the Supreme Court races (one partial term where Johnson is the candidate and two full-term seats where Kelley and McCormack are on the ballot.)

We simply must spread the word on these three incredible women. We must tell our friends, our coworkers, our family — anyone who will listen — that these three women represent the best choice for Michigan’s future.

END_OF_DOCUMENT_TOKEN_TO_BE_REPLACED Now it’s time to share this information with as many Michiganders as you can. An easy way of doing that, of course, is to print out the Eclectablog Voters Guide (pdf) and hand it out widely.

As your reward, I present you with the the bloopers and outtakes from Bridget McCormack’s massively viral West Wing public service announcement (after the jump.)

END_OF_DOCUMENT_TOKEN_TO_BE_REPLACED 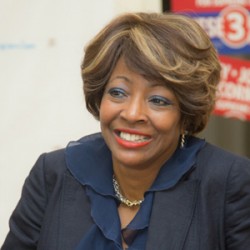 Judge Shelia Johnson serves in the 46th District Court that covers the affluent southeastern Michigan communities of Southfield, Lathrup Village, Bingham Farms, Beverly Hills, Franklin and Southfield Township is not your ordinary judge. Judge Johnson was born and raised in Michigan and spent time as a child in the segregated South. Through these life experiences, she as seen how justice is administered from several unique vantage points. She has also seen how justice is often denied and has spent her life trying to correct that.

My interview with Judge Johnson after the jump.