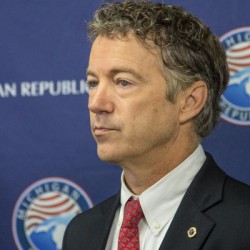 The GOP believes they simply need to talk about issues that African Americans care about, not actually do anything about them Kentucky Senator Rand Paul came to Michigan today to be part of the opening of the Republican’s Detroit “African American Engagement Office”. No, seriously. Before the Republicans got their day started, Democrats had a press conference nearby where they […]

END_OF_DOCUMENT_TOKEN_TO_BE_REPLACED 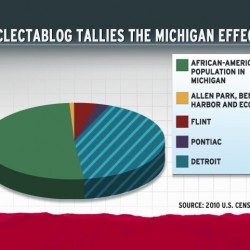 Democracy is not disposable

Today at 4 p.m., there will be a townhall meeting in Detroit, Michigan to protest the imposition of an anti-democratic Emergency Financial Manager on Michigan’s largest city. Details are below. You can RSVP and get more information at their Facebook event page HERE.

Click through for details on this event and a prayer vigil to be held this Thursday.

END_OF_DOCUMENT_TOKEN_TO_BE_REPLACED

Detroit to Lansing March for Democracy and Freedom has been postponed

Yesterday, I wrote about the March for Democracy and Freedom being organized by Rev. Charles Williams II and his group, National Action Network – Michigan Chapter. The march was modeled on the Selma to Montgomery civil rights marches of the mid-60s and was in protest of voter suppression legislation passed by Michigan Republicans as well as the anti-democratic Emergency Manager Law, Public Act 4.

Yesterday, Governor Snyder stunned the state by vetoing the three most egregious bills in the election reform package sent to him by the Republican legislators. Based on this, the march has been postponed.

Rev. Williams’ statement after the jump.

END_OF_DOCUMENT_TOKEN_TO_BE_REPLACED Birds of a feather The most-reviled governor in the country, Scott Walker of Wisconsin, will be in Troy Michigan tonight to headline a Republican fundraiser. The venue is the same one where Americans for Prosperity held their forum a couple of months ago — The San Marino Club on Big Beaver Road. As you might imagine, there will be a […]

END_OF_DOCUMENT_TOKEN_TO_BE_REPLACED

Pictures from delivery of petition signatures to repeal Public Act 4

Here are some photos, courtesy of Michigan Forward, from the delivery of over 226,000 petition signatures to the Secretary of States office on Wednesday. Some details along with a statement from Michigan Forward are available in yesterday’s News Round-up. Rally at Central United Methodist Church Another rally shot Brandon Jessup, Rev. David Bullock, Rev. Charles Williams and others delivering petitions […]

END_OF_DOCUMENT_TOKEN_TO_BE_REPLACED

The fallout continues Good to see the civil rights leaders and clergy of Michigan getting involved with decrying the racist ad put out on Sunday by Pete Hoekstra. The Rev. Charles Williams II and a coalition of clergy members are asking Hoekstra campaign contributor Quicken Loans to denounce the commercial and ask Hoekstra to pull it. Here’s their press release: […]