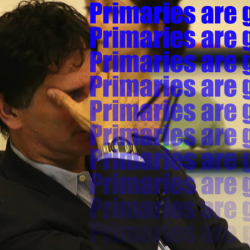 Whitmer and Schuette maintain decisive leads in most recent MI-GOV poll while El-Sayed, Thanedar, and Calley are barely competitive

Emerson College released a poll of the Michigan gubernatorial race this week and, with the primary just two weeks from today, it’s looking increasingly like it will turn out as expected with former Senate Democratic Leader Gretchen Whitmer facing off against our rabid conservative ideologue and Attorney General Bill Schuette: Democratic Primary Whitmer 39 Thanedar 17 El-Sayed 12 Republican Primary […]

END_OF_DOCUMENT_TOKEN_TO_BE_REPLACED

POLL: Todd Courser tied for third place just one month out from the election

With just a month remaining before the primary election to choose the Republican and Democratic candidates in the 82nd Michigan House district, Todd Courser is in a three-way tie to replace himself with himself according to new polling results released this morning by Grassroots Midwest, Inside Michigan Politics, and Target Insyght. The poll of 300 likely Republican primary voters in […]

END_OF_DOCUMENT_TOKEN_TO_BE_REPLACED

Michigan GOP pollster Steve Mitchell keeps polling until he gets the answer he is “comfortable” with. Again.

Back in September, Harry Enten wrote a piece on Nate Silver’s FiveThirtyEight blog taking GOP pollster Steve Mitchell to the woodshed for adjusting his polling when he didn’t get the answer he wanted. Mitchell had polled several races in Michigan and, when the numbers didn’t agree with what he thought they should be, he went back to the phones to […]

END_OF_DOCUMENT_TOKEN_TO_BE_REPLACED Gotta love a headline like this: “Schauer edges ahead of Snyder, 45% to 43%, in new governor race poll”. Mark Schauer is one of the most patient, methodical politicians I’ve ever seen. In my interview with him last fall, we had this exchange: Eclectablog: One of the things that I’m hearing from folks on my blog and elsewhere online is […]

END_OF_DOCUMENT_TOKEN_TO_BE_REPLACED A candidate for a new age

Public Policy Polling (PPP) released a poll today that, among other things, asked the question, “If the candidates for Senate next year were Democrat LOLGOP and Republican Justin Amash, who would you vote for?” The answer? LOLGOP won 23% to 22%.

Think about that just for a minute. Justin Amash is losing to a Twitter handle.

END_OF_DOCUMENT_TOKEN_TO_BE_REPLACED

OMG! Romney is ahead in Michigan and by 14 points in Florida!!!

Oh, my freaking GOD! Romney has pulled ahead of Obama in both Michigan and in Florida! The Ryan Splat turned out to be the Ryan Kertwang after all!

That’s what one of the most highly discredited polling firms in the country, Foster McCollum White & Associates, says. Their Michigan poll, released on Friday, is breathlessly titled “Its official, Paul Ryan has created a significant bounce for Mitt Romney and down the ballot as well, creating a new challenge for President Obama and Democrats, per poll”. The poll has President Obama down by almost 4 percentage points and, hilariously, has Pete Hoekstra up by over two over Senator Debbie Stabenow.

Problem is, the people they polled were ridiculously old and white, way more so than the people who typically vote.

END_OF_DOCUMENT_TOKEN_TO_BE_REPLACED

Did you hear the one about how liberals hate Pres. Obama?

Have you been hearing that lately, how much true liberals really don’t like President Obama much these days? It’s all over the television. The news shows talk about how he has “lost his base”. The pundits wonder if he’ll get beat by Sarah Palin in 2012. The liberal blogosphere is all a-twitter (including Twitter) about how the President should be […]