Whitmer and Schuette maintain decisive leads in most recent MI-GOV poll while El-Sayed, Thanedar, and Calley are barely competitive

Emerson College released a poll of the Michigan gubernatorial race this week and, with the primary just two weeks from today, it’s looking increasingly like it will turn out as expected with former Senate Democratic Leader Gretchen Whitmer facing off against our rabid conservative ideologue and Attorney General Bill Schuette:

Not only is Whitmer looking solid for the general election with a seven point advantage, if you look only at “very likely voters”, Whitmer leads Schuette by a whopping 13 points.

A couple of comments here. First, Emerson College is a well-respected polling group. FiveThirtyEight has them as the second most “polls to trust”. That, combined with how closely this mirrors the last poll in this race, suggests that these leads are real.

Second, Abdul El-Sayed’s dismal performance is being rebutted by this supporters who say they aren’t being polled because they don’t use landlines. This is a valid argument and it is true that the Emerson College poll was a combination of online polling and “IVR” (interactive voice response phone calls to landlines only) polling. However, these factors are taken into account in FiveThirtyEight’s ranking so the argument may not be as accurate as they claim. We’ll know two weeks from now. 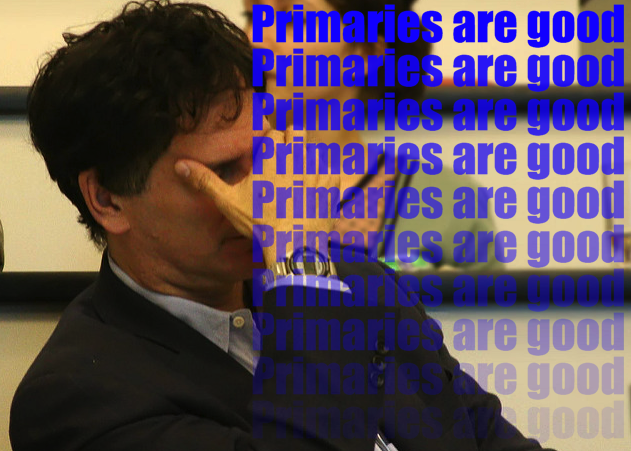 In the meantime, El-Sayed continues his efforts to demonize Whitmer as a corporate shill, beholden to big money interests like Blue Cross Blue Shield of Michigan whose employees raised money for her. A recent ad on her behalf run by the Super PAC “Build a Better Michigan” was criticized as coming from “dark money” sources, an accusation bolstered by the fact that they did not submit their donor list electronically. The managers of the Super PAC say it was due to a technical snafu, a claim El-Sayed’s supporters called BS on since it meant the donors wouldn’t be made public until after the primary. However, after pressure from Jonathan Oosting at The Detroit News and others — along with multiple fundraising emails from the El-Sayed campaign which continued to speculate that she was bought and paid for by Big Business — the Super PAC released their donor list yesterday. Turns out that, despite the attacks from her opponents, the vast majority of her money came from labor unions, Democratic groups, and progressive groups like Emily’s List.

If I were a conspiracy theorist, I’d wonder if their delay was intentional, designed to work El-Sayed’s supporters into a lather and lure them out to the end of the “she’s a corporate shill!” branch, only to quietly saw the branch off behind them when the donor list was finally revealed.

At any rate, El-Sayed’s negative campaign approach, one he has consistently clung to since early this year, appears to be falling flat, aided and abetted by the bizarroland campaign of Shri Thanedar who is trying to brand himself as “the most progressive candidate” despite no evidence whatsoever of this in his past. The irony here is that, despite the attacks on her progressive bona fides, Whitmer was once feared to be “too progressive” to run for governor.

I find it increasingly difficult to understand the endgame here. If Whitmer DOES clinch the primary, what will El-Sayed tell his followers? “Time to support the woman I have told you is an evil, corporate shill for the past year”? The general election is going to be tight. We are going to need ALL progressives pulling the rope in the same direction and I fear this won’t happen thanks to his highly negative campaign. The same can be said of Thanedar and his supporters, too, of course (though I question just how many actual “supporters” Thanedar really has.)

For his part, Thanedar has now turned his sights on Whitmer and has sent out at least two large mailers in the past week, characterizing her as bathing in money from BCBS, despite the fact that it isn’t actually true. One of the mailers shows her being showered in paper money, another ironic idea given that Thanedar has put at least $6 million of his own money into his campaign and seems to be raising little from anyone else.

I, for one, will be VERY glad when this primary is over.