Michigan Witches Against Patriarchy rally at the Capitol to protest abusive language by Republicans – April 14, 2021

Whether it’s Michigan Senate Majority Leader Mike Shirkey constantly referring to Governor Whitmer’s looks and calling her a “gal” or Michigan Republican Party Chair Ron Weiser calling our Governor, Secretary of State Jocelyn Benson, and Attorney General Dana Nessel “witches” to be “burned at the stake”, Republicans’ public language has become increasingly abusive. It’s easy to blame Donald Trump for this devolution of Republican rhetoric but these men, along with far too many of their colleagues, are responsible for their own actions.

Women in Michigan have had it. These are no longer isolated incidents, they are becoming the norm. And they’ve crossed the line into outright abuse.

In response, Bridget Huff, the Electoral Chair of Metro Detroit Political Action Network, along with the group Fems for Dems, has organized a rally titled “Michigan Witches Against Patriarchy” (MiWAP). The event will take place on at the state Capitol Building on Wednesday, April 14th from 4:00 to 5:30 p.m. They are encouraging people to wear their witch garb and bring brooms to the protest. Speakers include organizer Huff, an activist and formerly abused spouse, as well as Washtenaw County Prosecutor Eli Savit, Lori Goldman from Fems for Dems, State Representatives Abraham Aiyash, Laurie Pohutsky, Kelly Breen, Senator Curtis Hertel, and Nicole Denson from Planned Parenthood and Mosaic Collective. The list of speakers is growing. 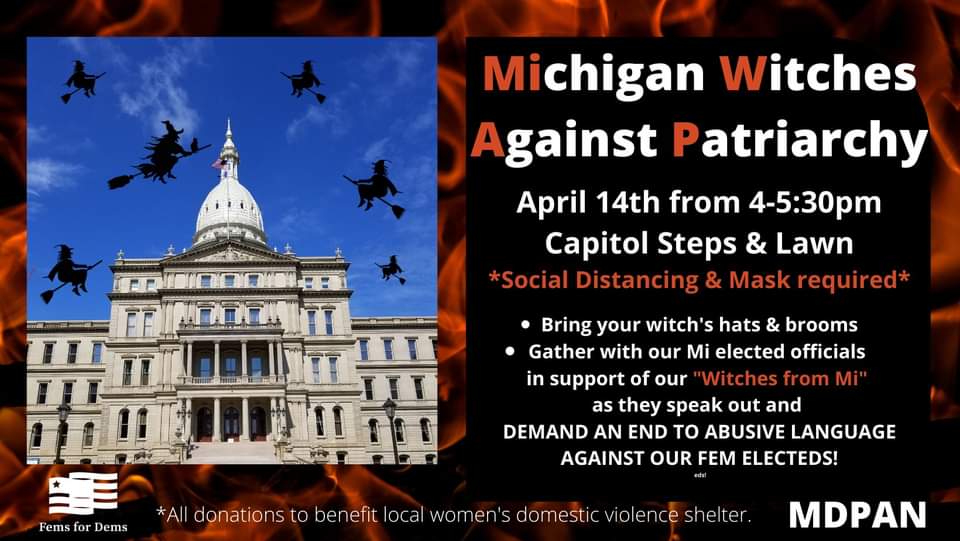 I asked Huff what she hoped to accomplish with this rally. “There will be a loud and clear demand to require media to call this verbal and emotional abuse what it is,” she told me. “Not gaffes. Not insults. It’s abuse. Any workplace would define it as such, and we need to refuse to let it be downplayed any longer.”

Here is the official description of the rally from the Facebook event page:

Calling all Michigan Witches Against Patriarchy! You are being summoned to the Lansing Capitol steps on Wed, April 14th at 4-5:30pm, to show support for our very own “Witches from Michigan” trifecta and to speak clearly about the behavior from GOP elected officials that we will no longer excuse in our state. Join us as our elected officials, community activists and domestic violence experts sound the alarm about the dangers we must address.

We will not be intimidated by the constant name-calling and misogyny, and we will not see it excused any longer!

We don’t need to guess where the hateful rhetoric will lead. We have seen the violent plans fueled by these incitements, yet the hate continues in the halls of our democratic institutions and beyond. Join us to show our solidarity with the women we elected to represent us, the Fems and their allies who see this workplace misogyny every day, and the experts on the dangers of excusing these behaviors in any setting.

Wear your witch’s hats, bring your brooms, wear a mask and socially distance. Help us put words into action by donating to a collection to directly benefit Women’s Domestic Violence Shelters serving our great state.

We are the witches from Michigan, and we will NOT BE SILENT!