An educator’s hope for the next two years

The following essay was written by Tina Beveridge. Tina is a veteran music educator of 17 years and is currently a 2nd year PhD student in music education at the University of Miami. It was first posted on her own blog Insert brilliant title here…

Reader, I’m not going to lie. I felt an enormous weight lift when President Biden was sworn in last week.

But, as my next-door neighbor while discussing the events of January, “Now the work REALLY starts.” As a music educator I felt that statement in my bones.

Education at the moment is a mess, not least of all because of the inconsistent hodgepodge systems being used for the pandemic. But public education is also suffering from four years of deliberate sabotage and twenty years of “reform” policies, which all stem from either a misdirected goal of erasing inequality through education or to completely privatize education. 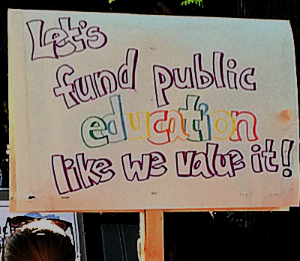 It’s ironic that the reformers all claim to want the same thing — better educational opportunities and outcomes without spending more money! — but have wildly different definitions about what that means, or which children they mean to help. And, of course, the pandemic has exacerbated all of these conflicts, with one result being a record number of teachers leaving the profession. Because who wants to be blamed when the policies fail and not even be able to fully support yourself from the salary? Or to receive derision when you finally say, “…but I’m not willing to die for it“?

While a poisonous houseplant would have been an improvement over Betsy DeVos, I have not set my mental expectations bar at that level. Incoming Secretary of Education Miguel Cardona certainly has his work cut out for him. I’m optimistic that those of us in education can use this moment of upheaval for eventual good. It is encouraging to me that Sec. Cardona has actually taught in a classroom, and isn’t a businessperson who thinks they know better than the people who actually work with kids.

Here’s a bit of what I hope to see:

I don’t know how much of my optimism will be borne out. But the time for educators to push for these things is now. Our kids can’t wait for us to decide if we want to be reactive or proactive. Thankfully, we finally have an administration that might be able to make some positive changes.