The overt and disgusting hypocrisy, misogyny, and racism of Michigan’s GOP legislative “leadership” 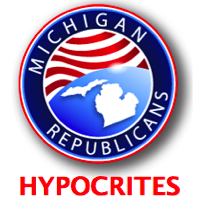 After the Senate session ended and the chamber cleared out, a line of about 30 boys from Lucido’s alma mater, De La Salle Collegiate, an all boys’ Catholic high school in Warren, stood in front of the Senate doors.

I asked Lucido for a moment to address the issue at hand, and he told me he would catch up with me after he was finished honoring the group of students.

As I turned to walk away, he asked, “You’ve heard of De La Salle, right?”

I told him I hadn’t.

The teenagers burst into an Old Boys’ Network-type of laughter, and I walked away knowing that I had been the punchline of their “locker room” talk.

Except it wasn’t the locker room; it was the Senate chamber. And this isn’t high school. It’s my career.

Also this year, Republican Representative Beau LaFave brought a gun to Governor Whitmer’s State of the State Address and later that gun and another were stolen from his underwear drawer in his apartment in Lansing.

Also this year, Republican Senator Dale Zorn wore a Confederate flag facemask on the floor of the state senate.

Zorn is still a senator today and is the Chair of the Senate Local Government Committee. He is also on the Senate Regulatory Reform Committee, the Senate Families, Seniors, and Veterans Committee, and several subcommittees.

All three of these men are white, male, and Republican. Hold that thought as you read on.

During Rudy Giuliani’s embarrassing appearance before the Senate Oversight Committee meeting last week, Democratic Representative Cynthia Johnson, along with other Democrats on the Committee, were allowed to ask only one question of each witness. Rep. Johnson was outspoken about the lies being told by witnesses (who the Chair refused to put under oath) and asked one witness to say and spell her name. This resulted in Johnson receiving death threats like this one (WARNING: the language in this clip is NSFW and VERY offensive):

In response to these frightening threats, earlier this week, Rep. Johnson posted a since-deleted Facebook Live video in which she said this:

When I say supporting our efforts, I am talking about doing things right and in order. There’s a good way to do it and a fu–ed up way to do it. Always provide proof. Nobody cares what your mouth is saying. Provide proof. Don’t get upset with folks and start cussing them out. Don’t. It never works. I wish I could be talkin’ to y’all in a private room. Because … I just wish I could. … But we’re public. Be smart. You don’t have to yell. You don’t have to curse anybody out. You don’t have to call anybody names. Hit their asses in the pocketbook. Hit them in the pocketbook. For instance, one of our bright citizens of our country, in Illinois who happened to voicemail me, unknown, but guess what? FBI, state police, they found her.

So this is just a warning to you Trumpers. Be careful. Walk lightly. We ain’t playing with you. Enough of the shenanigans. Enough is enough. And for those of you who are soldiers, you know how to do it — do it right. Be in order. Make them pay. I love you all. Bye-bye.

What was clearly a call to get back at “Trumpers” by “hitting them the pocketbook” was quickly seized upon as a call to violence by Trump supporters. And some of those Trump supporters include Republican leaders in our state legislature who responded by stripping Rep. Johnson of all of her committee positions.

So, on one hand, we have white male Republicans doing a wide assortment of offensive things and still maintaining their committee assignments. On the other hand, we have a black female Democrat who has her comments taken out of context and being stripped of hers.

This is racist. This is misogynistic. This partisan.

We hear the message Republican leadership is sending loud and clear. When you’re a white male Republican in the legislature, you can wear a Confederate flag mask on the floor. You can make inappropriate sexual comments to multiple women just trying to do their jobs, or bring a gun to the governor’s State of the State speech. You can pal around with armed protesters violating public health orders and threatening the safety of your colleagues. But the minute a woman or a person of color speaks up, the hammer falls. Systemic racism has flourished in the Republican-controlled state legislature.

Redistricting and new legislative elections cannot come soon enough in our state. It is time to clean house (and senate) and put people in charge who don’t condone bad behavior so long as it is done by members of one political party while excusing it for members of another.