The following essay was written by my pal Roger Kerson, an Ann Arbor-based writer and media strategist. Enjoy. 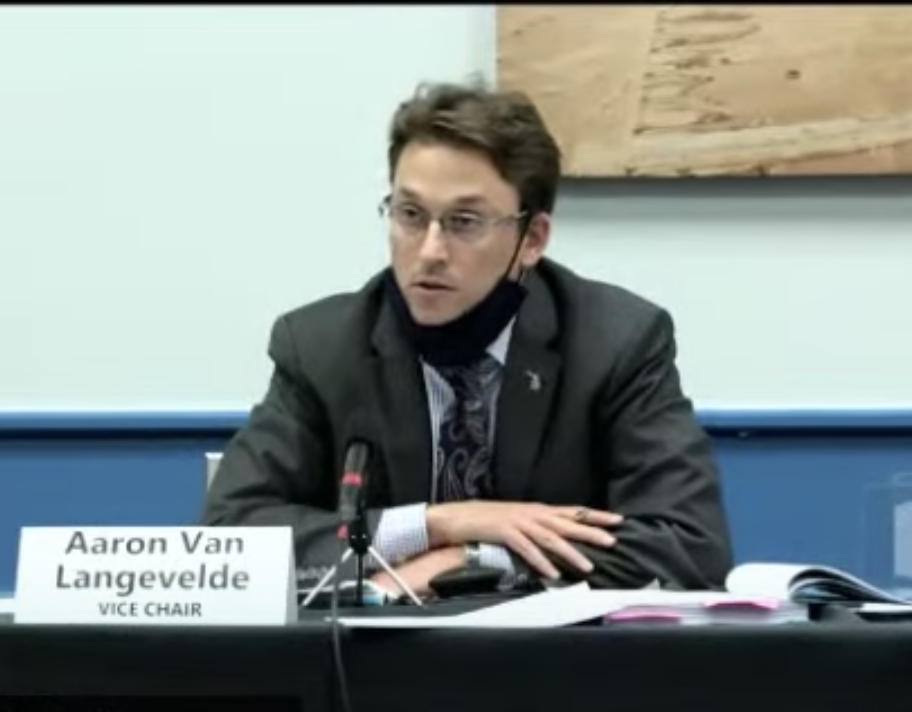 After former Trump fixer Michael Cohen, who do you think is the second-most famous graduate of Cooley Law School? My money is on GOP attorney Aaron Van Langevelde. He cast the deciding vote to certify Joe Biden’s 154,000 vote-victory at the Michigan State Board of Canvassers, winning high-profile praise as a man of integrity who defied his own party.

Sorry, but I think that narrative is upside down. It’s much more likely that Van Langevelde – who works for the GOP caucus in the Michigan House of Representatives – simply followed the prime directive of political staffers everywhere: Make your boss look good. And avoid any circumstances that might make your boss look bad.

I learned these unwritten rules long ago as a staffer for the late, great Perry Bullard, who represented Ann Arbor in the legislature for more than two decades. (I’m so old that there were no term limits back then!) It was a different time and I worked for a different political party. But making your boss look good is still a thing.

Which is why the surreal election “oversight” hearings staged by the GOP this week are just a sideshow, intended to make Republicans look good to Trump fans. At one of them, Rudy Giuliani, President Trump’s personal attorney, refused to be sworn under oath before questioning witnesses as if he were in a courtroom (which he wasn’t). The other featured witnesses complaining about an Asian man bringing in ballots to be counted at the TCF Center in Detroit and “a parade of Black Lives Matter in rhinestones.” There was also testimony that Democrats used corrupt Dominion software to steal not only this election, but the ones in 2018, 2012, and 2008. (H/T Sandwich Breathe)

These and other phony fraud claims have been dismissed in court and eviscerated in withering detail by competent election officials. A partisan rehash is dishonest and dangerous – but it’s not a serious effort to overturn the outcome of a legitimate election. That ship sailed at the Board of Canvassers meeting on November 23rd.

Looking good on Zoom that Monday, Van Langevelde soberly cited state law and effectively sank Trump’s zany, toxic attempt to snatch victory from the jaws of defeat. I clocked the announcement of his decision at 4:31 p.m. Shortly afterwards, GSA Administrator Emily Murphy finally “ascertained” that Biden had won the U.S. election. Trump acknowledged (and claimed credit for) her decision at 6:16 pm.

“As a Republican,” Alberta wrote, “his mandate for Monday’s hearing — handed down from the state party chair, the national party chair and the president himself — was straightforward. They wanted Michigan’s board of canvassers to delay certification of Biden’s victory.” Instead, van Langevelde “stood on principle” and “reflected a courage and moral clarity that has gone AWOL from his party.”

Um, no. Van Langevelde’s current boss is outgoing House Speaker Lee Chatfield (R-Levering) His new boss, come January, will be Speaker-elect Jason Wentworth (R-Farwell). That’s who signs his paychecks and that’s who he gets his “mandate” from – not the president, or state, or national Republican Party officials. Trust me when I tell you that the last thing the GOP caucus wanted was a vote on Trump’s ball-of-shit theory that state legislators can overrule their own voters, and turn the Electoral College into an authoritarian kindergarten.

This isn’t because Chatfield and Wentworth (or their Senate counterparts) are nice fellows, or small “d” democrats, or deeply concerned about disenfranchising Black voters in Detroit. It’s because they have the same reptilian concern as all politicians – maintaining their own positions, with an eye on what they can run for next.

It’s one thing for a transgressor like Trump to blow up every institution he touches to serve his own selfish interests. It’s quite another for people who live inside of those institutions. Michigan state representatives and senators earn $71,000 a year; the House speaker gets $95,000. Unlike Trump, these folks can’t go home and live off an inherited pile or sign a fat book deal; they have to work and raise money in the mundane world of retail politics. From this perspective, the transaction Trump was trying to pull off with state legislators – how about you burn down your house so I can stay in my house? – doesn’t look so good.

Suppose Van Langevelde had voted differently. And suppose the Michigan Supreme Court had been unable to sort out the unprecedented mess of a deadlocked Board of Canvassers. At that point, the GOP majorities in control of both houses of the legislature would have nothing but bad options:

If you’re Van Langevelde, and you want to avoid making your boss look bad, wouldn’t your “mandate” be to avoid this outcome at all costs? Republican legislators surely prefer Trump to Biden (and they definitely detest Gov. Whitmer). But they can’t live their entire lives inside a MAGA bubble. They’ve got swing seats to defend, and members who are planning to run for statewide office. Moreover – unlike my former boss Perry – they’re all term-limited, which means their long-term career plan is a sweet spot in a bipartisan Lansing lobby shop. Engineering the most controversial and destructive vote in the history of Michigan politics is hardly a way to achieve any of those objectives.

To be fair, I’ve never spoken to Aaron Van Langevelde and he’s not giving any interviews. It’s possible that he arrived at his position – the Board must certify! – by cracking the relevant law books, with a determination to Do the Right Thing regardless of political consequences.

But… people who disregard political consequences don’t usually wind up in highly political jobs, like being a lawyer for Michigan House Republicans. And it’s a bit too neat of a coincidence for me – one that others writing about this seem to have missed – that Van Langevelde’s “party-defying” vote actually serves the concrete political and economic interests of his direct employers. His bosses certainly don’t seem unhappy with him. “Aaron has been a very valued member of this team and will continue to be next session,” Wentworth told the Detroit News the day after the epic Board of State Canvassers meeting. If he had really “defied” the party he works for… wouldn’t the party have fired him?

By the way, there’s been a similar outbreak of rationality in other states. In addition to Michigan, Trump has challenged election results in Arizona, Georgia, Pennsylvania, and Wisconsin, all states with all-red legislatures. There’s nothing stopping these worthies, really, from taking up explicit invitations from Trump and Giuliani to cause chaos by tossing out real votes in favor of a fake slate of electors. But none of them have done so. (There was a half-baked resolution from back-benchers in Pennsylvania, but GOP leaders there let it die without action when they adjourned for the year. Now they’re calling for Congress to intervene – which is odd, since they passed on a chance to do it themselves.)

What gives? With Trump on his way out, are Republican elected officials finally developing some spine? Maybe. More likely, they are just unwilling to shit where they eat, regardless of who’s asking.

I don’t agree, by the way, with those who are saying, “The coup never had a chance, so why all the frantic Tweets?” Trump has blazed a terrifying trail toward autocracy, which he or others might use more successfully in different circumstances. What if a Democrat from the Sanders/Warren/AOC wing of the party wins a future presidential election? And what if, inshallah, they bring along solid majorities in both the U.S. House and Senate? Even our newfound friend Van Langevelde might think twice before certifying that puppy.

The president of the United States is asking courts and legislatures to throw out the results of free and fair elections and his supporters are openly calling for martial law. At least one rogue member of Congress is planning to challenge Biden’s Electoral College victory. I’d say our democracy is at DefCon 3 or maybe DefCon 2 about now. If we’re going to keep away from DefCon1 next time, we’d better have a realistic grasp of the factors that prevented total disaster this time around.