John James is running the most cowardly U.S. Senate campaign in America 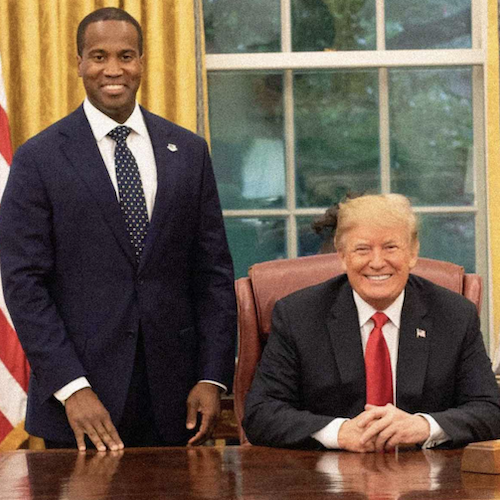 After a campaign in which he has done nothing but duck questions and attempt to pin Donald Trump’s Covid-19 failures on his opponent, John James is finally standing out.

Among the competitive Senate races identified by the nonpartisan Cook Political Report, every Republican Senate candidate, except James, has publicly indicated their position on whether to consider Trump’s Supreme Court nominee before the election.

Of course, James’ actual position isn’t hard to figure out here — as usual. He’s with Mitch McConnell, as he’d be on just about every issue in the U.S. Senate.

He has praised Amy Comey Barrett, Donald Trump’s pick to replace Ruth Bader Ginsburg — against Ruth Bader Ginsburg’s dying wish. And by validating the process, he’s aiding the effort to ram in a new justice in time to make sure Republicans get the rulings they want when it comes to destroying the Affordable Care Act and potentially helping Trump cheat in the election Bush v. Gore-style. James’ objection completely ahistorical second attempt to steal a Supreme Court by Donald Trump and Mitch McConnell would make national news and cast serious doubt on this already shaky process.

Even Susan Collins has called for a delay in Barrett’s confirmation hearings until after the election. In contrast, James is, essentially, behind Trump “2000%.” As usual.

But this abdication on the core questions of this election surprises exactly no one. He’s proven completely willing to play political games when it comes to life-or-death issues.

Nowhere is James’ cowardliness more repellent that in his defensiveness on protections for Americans with pre-existing conditions, which he claims he supports. There’s a simple way to show you are against the discrimination against Americans with previous health issues, you oppose the lawsuit designed to destroy the Affordable Care Act.

James sees the polling that supports the centerpiece of the ACA but he also talks to GOP donors who hate Obama’s signature health care law, mostly because it taxes the super rich to insure poor people. There has never been a Republican plan to protect people with pre-existing conditions because they want to give rich people back their money and lower premiums. The math just doesn’t work. It’s like saying you support a national pension program for all Americans but just not Social Security.

There is no alternative to ACA that maintains the rights it won for Americans with health conditions, especially one that James’ rich donors will like. This is why the GOP proposals to replace the ACA all ended up gutting these key protections along with proposing massive deep cuts to Medicaid  that would leave seniors and poor families in a much worse position than they were in before the ACA became law.

Instead of proposing a real plan that could be law as hundreds of millions of Americans face the peril of the ACA being gutted by un-elected Justices, James is using his family’s health as a prop to vouch for his health care credentials. But no one doubts well off families like James will always be able to get coverage for their kids. That’s why he’s willing to play games with the health insurance of everyone else.

That’s the kind of cowardice that could leave cancer patients worse off than they were before Obamacare.