Vice President Mike Pence visited a school in North Carolina today, ostensibly to show how the power of school choice is the key to reopening schools this fall…

In an email sent Monday, school officials said Pence will visit Thales Academy K-5 to see how school choice works and to advocate for its further implementation.

Pence also tweeted about how the school, Thales Academy in Apex, NC, was demonstrating how schools could reopen safely.

Thank you to Mrs. Combs’ 4th Grade Class! We are so proud and happy to see you all back in school! @Thales_Academy has taken careful steps to keep everyone healthy and we are grateful for the countless hours put in to open the academy and get kids back in the classroom! pic.twitter.com/KgtuHLDPt2

So what’s the secret at Thales Academy? How can other schools learn from what they are doing at Thales to guarantee a safe reopening? And what kind of school is Thales Academy anyway?

Thales Academy was the brainchild of Raleigh, NC Libertarian businessman, Bob Luddy. Luddy made his fortune by building kitchen ventilation systems, making him ideally-suited to create a new school from scratch. Frustrated with the regulations that “bureaucrats” in North Carolina required for public schools, Luddy’s first step was to open his own charter school, Franklin Academy.

Franklin Academy, which is still in operation, has had its share of problems over the years–most recently making news for prohibiting their students “from discussing or promoting being homosexual, bisexual or transgender” in the school’s handbook. Facing extreme pressure from the community, Franklin eventually was forced to slightly alter the handbook language, offering this “excuse“:

“The line has been revised, for clarity, in order to prevent any further misrepresentation of the intent of this policy. We believe strongly in the maintenance of a dedicated learning environment in which students and staff feel safe.”

But some former students weren’t buying the school’s explanation.

“But the problem is that it was in there to begin with. As a charter school, they get public funding and shouldn’t be able to do this.”

But the pressure at Franklin evidently didn’t make its way from Wake Forest to Apex, where Thales Academy, a private independent school in the “Luddy network of schools” is located.

And it seems as though the libertarian lesson Mr. Luddy learned from the flap at Franklin was that even a tiny bit of regulation is just too much:

“Charters are far better than the [traditional] public system,” Luddy says, “however, there’s still regulation…and over time, the bureaucrats are going to continue to load more regulation on charters.”

Luddy’s solution was to escape state regulation was to create his own network of private independent schools, to which Thales Academy belongs. So how is Thales Academy different from charter schools, or from traditional public schools?

Well, for one thing, Thales charges tuition–but not the exorbitant price tag that so many private schools charge. The tuition at Thales is around $5300 for elementary students, and $6000 for middle and high school children. “Not surprisingly, tuition at Thales roughly mirrors the amount available to parents under the ESA (North Carolina’s “Education Savings Account”) program.”

“advantage of North Carolina’s tax-exempt financing for school construction, and Luddy himself makes a one-time contribution to help defray capital costs with each new facility. Luddy also provides about 6 percent of the student body with financial aid that covers up to half the cost of tuition, and 34 students (1.5 percent) receive financial aid through North Carolina’s Opportunity Scholarship Program.[*]

And what happens in Thales’ classrooms is also troubling. Luddy is a big fan of “Direct Instruction,” an approach to teaching that the eminent education writer, Jonathan Kozol, criticized “in his book, The Shame of the Nation, for being excessively dogmatic, utilitarian, and authoritarian.”

Direct instruction is a pedagogical system that relies on scripted, teacher-centered and focused instruction, heavy use of repetition, and group or choral responses from children in response to teacher prompts. Commonly found in “No Excuses” charter chains, like New York City’s Success Academy Network, KIPP, and Uncommon Schools, this pedagogical approach is characterized by rapid pacing, barked instructions, quick corrections, and the teachers’ insistence that students maintain eye contact on the teacher at all times. Here’s a video of the approach in action:

Critics of direct instruction point out that it limits student–and teacher–creativity, doesn’t promote student independence or collaborative work, and see direct instruction as a “betrayal of the humanistic, egalitarian foundations of public education.” Many teachers are also uncomfortable with adhering to an instructional approach whose most well-known advocate, Doug Lemov, author of “Teach Like A Champion,” likens to “a policing theory that many argue is responsible for mass incarceration.”

First of all, a technique in the first edition, “Sweat the Details,” encouraged teachers to apply the “broken windows theory” of policing to their classrooms. This theory advocates that in impoverished neighborhoods (often communities of color), police harshly punish small infractions, like graffiti or broken windows, to prevent more serious crimes. Since 2015, this theory has been pinpointed as the cause for police brutality and mass incarceration of African-Americans; it has become widely condemned in the light of the deaths of Michael Brown and Eric Garner.

This connection is especially concerning in classrooms like the ones featured in the above video–white teachers working with students of color. The possible influence of an instructional delivery system that prioritizes harsh discipline, obedience, and unquestioningly following instructions over critical thinking, independence, and creativity on students of color is profound–and potentially devastating. 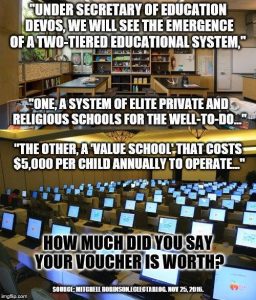 Luddy’s “low-priced private schools” fit right in to Betsy DeVos’ furtive plan to develop a two-tiered educational system: comprised of elite private and religious schools for the children of the uber-wealthy, and a rag-tag assemblage of poorly-funded and -maintained public and independent “value schools” that cost around $5000 per child to operate.

And Mr. Luddy is not limiting his efforts to destroy public schools with his “pop-up value schools” to the state of North Carolina–he’s also been busy in neighboring Tennessee, where TN Gov. Bill Lee is a DeVos supporter and ally:

Thales and Luddy are not new to Tennessee. In fact, in 2015, voucher advocate Lee Barfield paid for a private plane to take former Nashville Mayor Karl Dean and then-House Speaker Beth Harwell to North Carolina to visit the Thales schools. Like Bill Lee, Barfield is a long-time supporter of Betsy DeVos’s American Federation for Children and even served on the group’s Board of Directors.

The bottom line is that Bob Luddy’s Thales Academy is less a school than it is a school-shaped ATM that allows Mr. Luddy and his partners to receive state tax incentives for school construction and redirected tax dollars through state-sponsored “education savings accounts” (AKA, “private school vouchers”), all while offering a sub-standard educational experience delivered via an ineffective and unnecessarily controlling instructional approach–with an unhealthy dollop of anti-LGBT discrimination plopped on top like a rancid cherry on a melted, dripping sundae.