Defunding the police in Detroit schools: A youth perspective

The following essay was written by students in the Detroit Public Schools Community District. At a time when the Overton Window view about the role of policing in our society is shifting ever more to the left, their voice is important and deserves to be heard. Organized by the group 482Forward which is working for a quality education for EVERY child in Detroit, the contributors to this piece are:

You can read about a recent action taken by 482Forward members HERE.

Black Youth and Encounters with Police:

I was 14 and in the 8th grade when a girl assaulted me and I defended myself. They took us down to the counselor’s office. They closed the door. It was just me, her, the counselor, and the officer that they also called in. They let the girl explain her point of view but I didn’t get the same chance. So I was like, “am I going to get a chance to explain”? But every time I tried to cut in, they cut me off. I was getting pushback for what I did. Even though the whole thing was self-defense. But with the way it was going, I couldn’t even respond. If I had responded, the officer probably would have used it against me. I was taught my rights, so I figured that if I had said something, they would have used it against me.

They told me that my parents were going to go to jail for what I did. They threatened me. They took my records. They did so much stuff. They didn’t take her records though; the police only took mine.

My mom came the next day because I told her about the situation. They didn’t tell her nothing about it. I felt horrible. I was scared to enter the school building, I’m not even the kind of person that likes to fight! So I felt like I didn’t want to go to school. And I was like no. My cousin gets bullied by the students at that school. He’s got a disability. He brought a knife to school to protect himself. That went on for the whole year. When I graduated from middle school, I went to a school that was nowhere near those people. I told my mom that I did not want to go to that school. So I went to Ben Carson. It’s nowhere near the east side. We have to fight to get police out of our school because no kid deserves to go through what I did.

This experience comes from Malacah Mason, a Black-identified student at Benjamin Carson High School, and it represents just a small fraction of the numerous experiences of students in Detroit with the police. These innumerable negative encounters with police result in a feeling of hurt and fear in our youth. Unfortunately, Malacah is not the only youth who has experienced such horrible experiences with police in our Detroit schools. Emily Wilson, a Black student who recently graduated from Cass Technical High School, recounts her story and thoughts about police in the following paragraph.

The use of police officers has been extremely detrimental to the Black community, my community, for centuries. From being harassed for no reason, to being wrongfully pulled over due to racial profiling. Due to this treatment, many Black people including myself have developed not only fear but also hatred towards cops. Not only do we witness cops in the streets, but also in our schools. When I walk into my school, I’m greeted by metal detectors and security guards. I automatically feel an underlying sense of fear. I feel as if they see me as a criminal. I thought cops in schools were normal until I realized that only schools in Black and Brown communities get this treatment. In the state of Michigan, the only school districts that have their own police departments are Detroit, Benton Harbor, and Flint; all of which just so happen to be predominately Black. This shows that, at best, the district has a misguided notion that police will keep us “safe”, and, at worst, they are preparing Black students for the school to prison pipeline. Black students do not need to be policed in our own schools.

Immigrant Youth and Encounters with Police:

Studies by the American Psychological Association (APA) show that immigrant youth already have higher rates of anxiety, depression, and post-traumatic stress disorder from living under the constant threat of deportation. The presence of law enforcement adds stress and fear to a vulnerable group experiencing systemic trauma and creates an additional barrier for undocumented parents to engage with their child’s school. Law enforcement contributes to a culture of profiling and surveillance in schools that has been proven to negatively affect how immigrant students see themselves and how others see them. Schools supporting students as they develop their sense of self is crucial for undocumented students who must feel safe enough to disclose their status to teachers and counselors in order to access critical resources, such as scholarships. In late 2019, DPSCD adopted a Sanctuary District Policy that means the district will not collaborate with ICE. This declaration must go beyond making a statement, it must address all threats that prevent immigrant students from learning in a safe and supportive environment. Defunding DPSCD Police Department means prioritizing the safety and trust of our immigrant students and families. 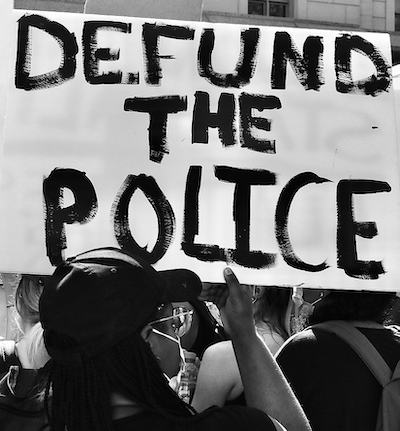 In light of the current Black Lives Matter nationwide organizing and climate of the U.S., defunding police now is more important than ever. A lot of people have come to the realization that the police are not really here to help our communities. Not only do they take money from schools by having their own department, but crime is practically nonexistent in schools, so why are they even there? Students see these big cops with badges that don’t even look like them. If parents and families are afraid of cops, what makes children any different? In days like these, they take funding out of schools and use it for cops and for useless things like metal detectors. Why is it that we need metal detectors in elementary and middle schools? As current Detroit youth, we want readers to think about this: imagine being 12 years old and at such a young age you are already used to getting your backpack patted down every morning. Not only this, but at 12 years old you already have to defend yourself just for having a bag of chips in your backpack. This should not be normalized for any young person.

The trauma that Black people and people of color have been facing is nothing new, it’s been going on for centuries. From the low funding for schools with predominantly African American students, to COVID running immigrant families out of business. Most people of color don’t have the privilege of working at home, they work paycheck to paycheck to keep the bills paid. Sadly, the murders of Breonna Taylor or Tony McDade or George Floyd aren’t anything new, but what is new is the patience that people no longer have towards it. No longer will we tolerate this type of mistreatment from the systematic oppression that cops bring to our communities. Even now with COVID still around, a lot of people that are protesting are likely to contract it. A lot of the people at those protests are Black people and people of color. Our communities are so tired and frustrated with all this injustice we are risking our health. Even with this unjust burden, we are not willing to stay quiet, we cannot stay quiet; even through the pandemic.

Revolutionary Assata Shakur once said: “It is our duty to fight for our freedom. It is our duty to win. We must love each other and support each other. We have nothing to lose but our chains”. This leads us to the present, in which we once again are facing racial inequity between Black people and people of color and the police, just like our people in the past have faced. Racial inequality and police violence aren’t new issues for our community, but they are starting to get wider coverage through increased access to cameras and social media. All too often, the coverage is temporary, and once the incident isn’t trending anymore, people who aren’t directly impacted by it go about their lives without creating systemic change. As youth, we know it’s our responsibility to change the systems which continue to oppress us. We need a support system in our schools. A support system that could be well funded by the over 10 million dollars we throw into a police system that does not benefit students. Why do we have money for police but no money for what we need. Why don’t we have money for smaller classrooms, more textbooks, and libraries? Why don’t we have money to fund proper literacy for Detroit students? Why did we have to fight for the Right to Literacy lawsuit? Why don’t we have the money for culturally competent counselors and social workers to provide support to all students? We have the money, let’s use it for students.

We are asking our elected school board members to use their power and show leadership by defunding the Detroit Public Schools Community District police department, and reallocating those funds in ways which increase safety for students of color.