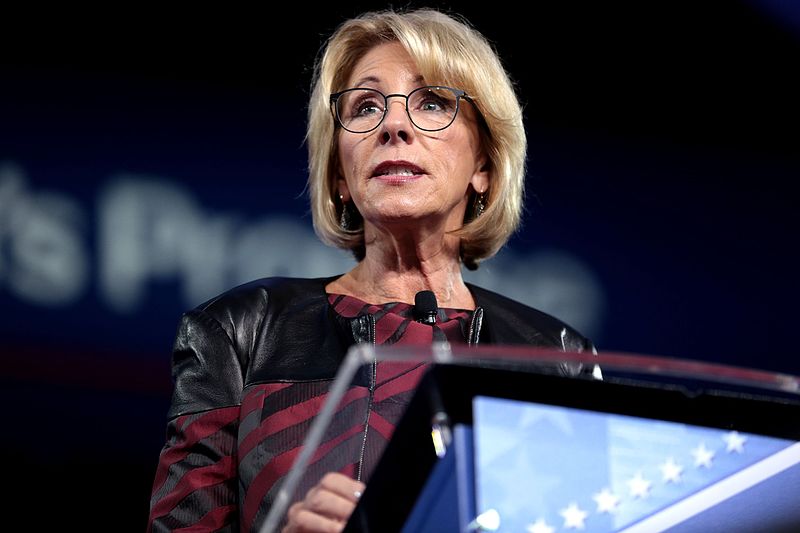 On April 15, Michigan reported 1,058 new cases of COVID-19 and 153 new deaths. That put the total number of Michiganders who had tested positive for the novel Coronaivirus 28,059 and the number confirmed dead from the virus at 1,921.

And this is how some right wingers in our state chose to mark the preventable deaths of our neighbors nearing the thousands — by purposely creating a traffic jam near a hospital.

The scene on Grand Ave. in downtown Lansing about 15 minutes ago where conservatives have jammed streets around the Capitol to protest Gov. Whitmer's stay-at-home order. It took about 10 minutes for this ambulance to evade traffic by turning the wrong way down a one-way street. https://t.co/xxoGnfg3EK

The arguments against the restrictions Governor Whitmer has put into place in an attempt to contain this plague are as flimsy as you might expect. Prohibiting travel to second homes, for instance, was actually requested by some elected officials in Michigan’s Upper Peninsula, where the hospitals could quickly be overrun by a Covid outbreak. States that haven’t embraced restricting are, predictably, seeing a “sudden rise” of Covid-19 cases.

And while there is definitely a place for frustration given the Trump administration disastrous response to Covid-19 and the growing economic destruction accompanying this massive failure, this protest mocked the horrendous suffering our state is enduring.

“Under the guise of our American right to assembly, a mob gathered, not only endangering themselves, but jeopardizing thousands of others throughout Michigan,” Jeff Timmer, Former Director Michigan GOP, wrote.

It also stank of the billionaire-sponsored tea party movement that exploited right-wing failures to attack anything the government might do to help workers out of the financial crisis. And like the tea party of the last decade, this movement has a direct connection to right wing billionaires.

The MFF was launched in 2012 by McNeilly, an employee of Dick DeVos’ Windquest Group, for a sneak attack on the state’s unions launched in the lame duck session after Barack Obama’s almost 10 point victory in the state led to Democrats getting more votes for both the State House and Senate but not enough to overcome Republicans’ unconscionable gerrymander.

You can assume that everything McNeilly and the MFF does has the tacit approval and implicit financial backing of the DeVos family and Betsy DeVos, Betsy DeVos, current Secretary of Education and perennial contender for worst member of the Trump administration. As most any right-wing political activity in Michigan does.

But it wasn’t the DeVos family, or the other rich sponsors of the Republican Party, out on the streets risking being part of the potential spread of Covid-19. As Susan J. Demas noted,“[W]hy put yourself and your family in harm’s way when you can outsource protesting to folks who think conspiracy king Alex Jones’ ‘magic’ remedies will keep the evil vibes away?”

Instead, this protest attracted many of the usual folks who show up to Trump events, The Guardian noted:

Placards identified the Michigan Proud Boys as participants in the vehicle convoy. Near the state house, local radio interviewed a man who identified himself as “Phil Odinson”.

In fact the man is Phil Robinson, the prime mover in a group called the Michigan Liberty Militia, whose Facebook page features pictures of firearms, warnings of civil war, celebrations of Norse paganism and memes ultimately sourced from white nationalist groups like Patriot Front.

And you also saw a Confederate flag or two, because that’s how much these guys care about states’ rights:

Huh, I guess it is a Republican protest. But what does the Confederate flag have to do with a #StayHome order? 🤔 pic.twitter.com/qR4EX6Hw5X

Of course, invoking a defense of chattel slavery seems subtle compared to the lynching of a Barbie doll:

The pro-COVID Trump rally yesterday — not only endangered public health — it was also a shameful spectacle of misogyny and hatred.
Keep saving lives, @GovWhitmer. Michigan stands with #ThatWomanFromMichigan pic.twitter.com/Pqs1c0Vk57

Instead of aiming to sink Obama’s presidency, the goal here is to save Trump’s. If you believe, as some suggest, that it will take six months for the economy to recover from the shock of Covid-19, you need to begin “reopening” by May 1 to see a resurgence by November 1, days before the election. And Dilbert Guy Scott Adams, who ridiculously enough tends to be the bellwether on where Trump’s messaging is headed, is selling “reopening” as worth the cost — even if the cost is the slaughter of a population the size of Pittsburgh: 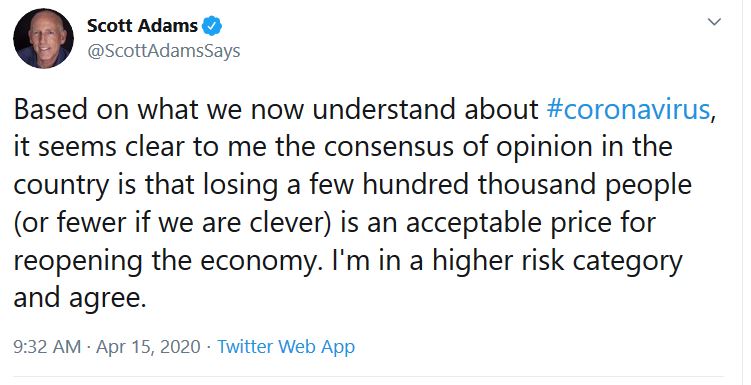 Trump is so onboard with this plot against America that he’s invoking a civil war to sell it.

It’s not hard to figure out what Trump is suggesting by connecting guns to Covid-19 — and it’s not that the pandemic he didn’t prevent has surpassed gun violence as a leading cause of preventable death. We know when Trump talks like this weird coincidences happen. For instance, his fans start putting together bombs in their fans and the evil killers suddenly target synagogues.

Of course, the one small hitch with this prescription for mass death is the fantasy that people will just return to normal economic behavior if Donald Trump and Republican donors like the DeVoses decide we should okay with sacrificing hundreds of thousands of Americans.

Only proper testing, tracing, and containment can send people who don’t want to see their families die alone on ventilators back to Applebees. And the notion that there’s some sort of recovery that will ease the economic pain of a decade of job losses being wiped out in about a month in time for an election isn’t just cynical. It’s the same sort of the happy delusion that allowed Trump to ignore this pandemic until the stock market started crashing.

The catch is that Republicans are as good at playing the media (and the stock market) as they are terrible at governing. And though the polls show massive support for life-saving restrictions — 81% supported a national stay-at-home order in a recent Quinnipiac poll — politicians may feel the pressure to give into the massive human sacrifice Trump and the GOP feel they need to maintain power.

Regardless what happens, this is another vile example of how little the party that frets over fertilized eggs and fetuses actually cares about human life.