It’s not just that he’s doing everything wrong; it’s that he knows he is.

History will likely note that every time Donald Trump spoke about the novel coronavirus now spreading across this nation, he made the situation worse.

There was this president’s constant campaign to downplay the effect of the virus:

There were his lies, most notably the lie on March 5th, that “anyone who wants a test can get a test.” This not only gave the most vulnerable Americans false hope, it  almostcertainly sent sick people into medical facilities, possibly infecting patients and personnel, hunting for tests that they still can’t get on March 16th. This was almost as bad as his travel ban, which few if any experts recommended, that flooded possibly infected people back in America to wait in lines for hours.

And on Sunday night, he continued his effort to get people killed by contradicting Dr. Anthony Fauci, our nation’s leading expert on infectious disease, again and suggested that young people largely don’t need to worry about the bug, even though they could be playing a key role in spreading it.

So what is the worst thing Trump said about COVID-19? I know you’re wondering, could it be worse than this?

Q: “Are there worries about a pandemic at this point?”

Yes, unfortunately it can. As always, the only thing worse than when Trump lies is when he tells the truth.

On Saturday night March 7th, right after the lie about the tests, Trump told GOP donors, “They’re trying to scare everybody, from meetings, cancel the meetings, close the schools — you know, destroy the country. And that’s ok, as long as we can win the election.”

The key word in this admission is “they.” Who is the “they” who wanted him to shut down everything?

He was referencing the press as the antecedent. But I hope and pray that he was also hearing this from any health expert who can get near him and isn’t afraid of telling him the truth. Because our lives depend upon it.

You’ve likely seen this excellent piece from Harry Stevens in The Washington Post on the models that suggest the best way to “flatten the curve” in order to decrease the spread and thus deaths from COVID-19. Basically, we have four choices: 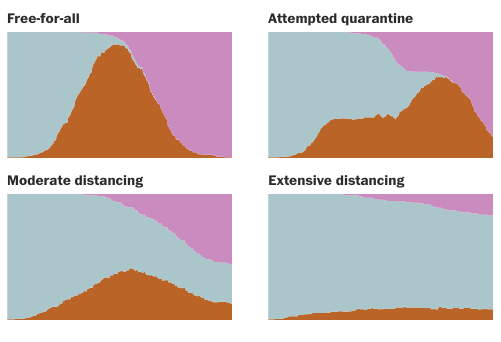 Real-time evidence of flattening the curve. Lodi had the first Covid-19 case in Italy, and implemented a shutdown on Feb 23. Bergamo waited until March 8.
Look at the difference.

What Trump was telling his donors is “they” were telling him we should be doing “Extensive distancing,” the best possible hopes for reducing the carnage of this outbreak. The idea that “the press” was trying to do this “to win an election” is absurd of course. If anyone is pushing this, it’s with the knowledge that this is likely to send us deep into a recession, possibly a depression, which would be bad — especially for journalists who are losing their jobs faster than coal miners. But it is better than death. Trump was telling his donors that he wanted a “Free for all” because he was more worried about economic numbers than lives.

What Trump admitted is that he knew what the right thing to do was and he refused to do it. And he was still refusing to do it on Sunday night. Now we are all suffering for it.

This is why, as Jeff Hauser argues on this week’s GOTMFV show, Democrats must step up our opposition. Making Donald Trump competent may be an impossible dream, but it’s our job to make him step up. And we are our only hope.