Prepare yourselves: Michigan election results could be delayed. There is, however, a solution. 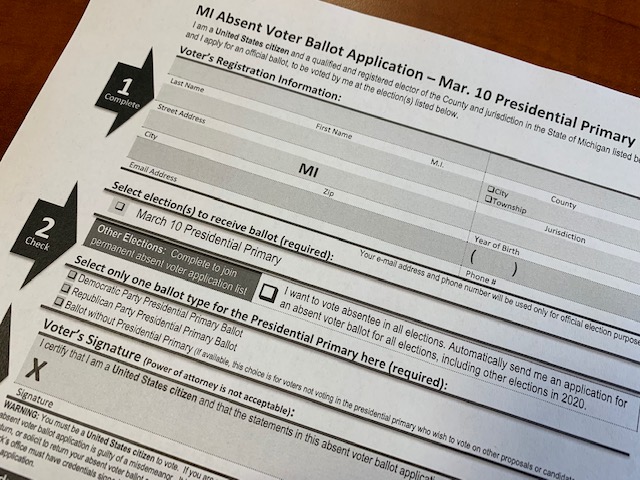 With the passage of Proposal 3 in 2018, Michigan is seeing a significant increase in voters taking advantage of voting by absent voter ballots. In Ingham County, we have held three elections under the new law, and now know firsthand of the need for updates in Michigan Election Law and Bureau of Elections’ promulgated rules and required procedures as a result.

County Clerks are charged with the programming of the computers (tabulators) that ballots are fed through and receive unofficial election night results to post for the community and report to the Michigan Bureau of Elections. Due to the anticipated increase in absentee voting and the volume of ballots cast being much higher in the Presidential elections, I envision a serious problem looming that will be detrimental to the efficacy and accuracy of election day reporting. As such, I would like to bring awareness to a solution that would correct this problem before it comes to be:

Give local clerks the needed flexibility to begin feeding absentee ballots through the tabulator the Monday before Election Day.

This can be done safely and securely, as evidenced in other states.

Under current law, local (city and township) clerks are prohibited from opening absent voter ballot envelopes and feeding ballots through the tabulator until the polls officially open on Election Day. Forcing them to wait when the number of absentee ballots nearly doubles will lead to our local clerks not being able to process all of the ballots by the time the polls close. If forced to rush to get them done, it may lead to human error, which would be incredibly harmful to the public trust in our election administration. I therefore request that the Legislature give local clerks the ability to begin processing ballots the day before Election Day. I am confident that this may be done in a safe and secure fashion, just as it has been done in other states like Ohio and Minnesota, that allow for processing before Election Day. The Bureau of Elections can provide guidance and rules to local clerks for the sequestration of poll workers who are processing absent voter ballots. Tabulators must be specifically programmed to not tabulate the results until after the polls close, and other measures can be implemented to continue to protect the secrecy of the vote and results.

As County Clerk, I know how anxious candidates, members of the press, and the public are to get unofficial election night results, as County Clerks are often the ones fielding the calls as soon as the polls close on Election Night. If the Legislature fails to act, clerks will be forced to explain why unofficial election results are not available from some jurisdictions until the day after the election, or, perhaps even longer. I am concerned that this delay may result in a decrease in voter confidence.

Legislative leaders have introduced some legislation geared toward helping on Election Day, but assigning more voters to a precinct and allowing for more flexibility when deciding the location of a polling location is merely window dressing and will not offer significant relief with the tabulation of ballots, especially if most of said ballots come in as absent voter ballots.

At this time, the Legislature is refusing to tackle the important issue of early tabulation. Election officials need more flexibility to get ballots counted as it takes time for the machines to scan and tabulate ballots. 2020 will be an incredibly busy election year, with many proposals and candidates on each ballot. A long and double-sided ballot will take more time to process, not to mention if ballots become two pages.

The voters of Michigan made their will known in 2018. They want us to make it easier to register and easier to vote. It is up to the local and county clerks from both sides of the aisle to implement the voters’ will, while providing timely and accurate results. If the Legislature fails to act, they will endanger local clerks’ ability to provide timely results. I call on the Legislature to pass legislation immediately that allows local clerks to begin feeding ballots into the tabulator the day before Election Day so that they may be processed efficiently.