Trump Doesn’t Care About Children and Families. He’s Not Welcome in Battle Creek.

The following opinion editorial was written by Cayley Winters, the West Michigan Communications Organizer for Progress Michigan. She is from Battle Creek and shares her perspective on Donald Trump and Mike Pence holding a rally there today, in the Congressional District of Congressman Justin Amash, an ardent opponent of Trump who left the Republican Party over his opposition to Trump’s presidency. 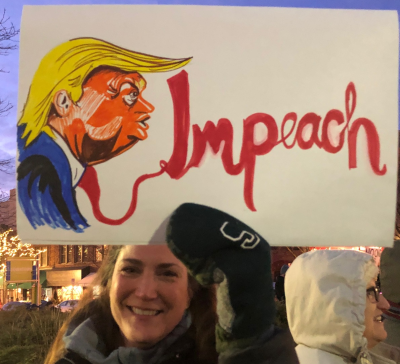 Whenever I think of Battle Creek, I always feel comforted and I always think of home. After a rainy day, you can tell which cereal was being made downtown by stepping out onto your front porch and breathing in the sweet-smelling air. If your family’s been here for more than a generation, you get to sit next to your elders around the holidays and hear stories about the booming Metropolis the town was when thousands of people went to the factories to work the lines at Kellogg’s and Post. That’s who we were, and that’s what we want to be again, but the people in charge aren’t helping us.

Battle Creek has helped feed millions of people across America. As the Cereal City, we’ve helped ensure people in Michigan and across the country are fed. The same can’t be said for our sitting President, whose shallow promises to bring manufacturing jobs back to the Midwest and proposed cuts to food assistance programs threaten thousands of Michiganders — especially children — with hunger.

The people of Battle Creek have had enough of the Trump administration’s lies and broken promises, including their recent proposed cuts to food assistance programs our communities rely on. As constituents, we have to trust that our elected officials work for us and that they will protect the most vulnerable among us, especially our children. Studies have shown that children who go to school hungry have a harder time concentrating and learning. Unfortunately, these proposed cuts by the administration would cause even more children to fall into that category. When President Donald Trump and Vice President Mike Pence come to Battle Creek, they should have to answer for the massive cuts they’re pushing that will force children in our community to go hungry.

Nearly one million Michiganders were eligible for food assistance as of October 2019, including 18,000 in Calhoun County and more than 25,000 in Kalamazoo County. Under Trump’s new restrictions, many Michiganders in need of food support will no longer be eligible for Supplemental Nutritional Assistance Program (SNAP) and children will automatically be cut from free and reduced lunch programs. These cuts, as well as the appointment of West Michigan’s own billionaire Betsy DeVos to his cabinet, reflect what we’ve known all along: Trump and his administration do not care about children and their families, but instead only care about the wealthy and well connected.

We’ve all seen the “heartwarming” videos on social media of children hosting lemonade stands or bake sales to pay off their classmates’ lunch debt, or a local person who took the liberty of writing a check to keep children from being put down because they can’t afford to eat like the rest of their peers. Despite these Good Samaritan stories, the root of the problem is a failure of leadership and bad public policy.

Food is a basic necessity and something our kids need to succeed. With these proposed cuts to lunch programs, Trump and Pence have proven that their values mean they don’t #BelieveInBattleCreek.