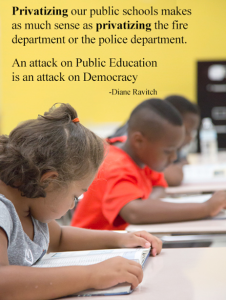 Given that education consistently ranks among the top issues for voters in most public opinion polls, with the vast majority (82%) of parents of school-aged children reporting that they are either “somewhat” or “completely satisfied” with their child’s education, one could be forgiven for being flummoxed by the near-absence of questions about teachers, schools, or education in general at any of the Democratic presidential debates thus far.

And while each of the candidates would likely claim that education is “very important” to them, the silence of most of these candidates on matters of education policy has been deafening. Only two of the candidates (Bernie Sanders and Elizabeth Warren) have released anything resembling a coherent education plan, although no one should be surprised if some of the others use this opportunity to unveil plans of their own in front of what is sure to be an appreciative, if somewhat wary audience.

Which makes Saturday’s “Public Education Forum” in Pittsburgh more of a mystery at this point than anything else. 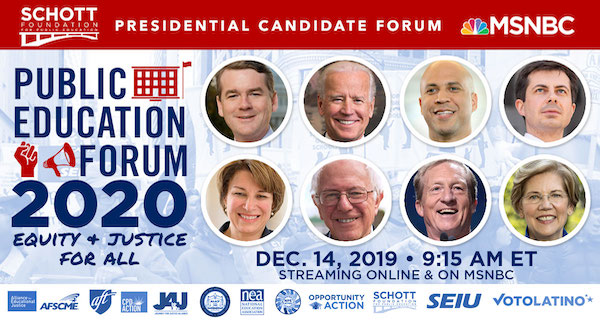 That said, the event’s organizers (Alliance for Educational Justice, American Federation of State, County and Municipal Employees, American Federation of Teachers, Center for Popular Democracy Action, Journey for Justice Alliance, NAACP, National Education Association, Network for Public Education, Opportunity to Learn Action Fund, Schott Foundation for Public Education, Service Employees International Union, Voto Latino) deserve a ton of credit for holding a town hall that will force the candidates to focus on education, if only for a day.

For anyone who works in education, this forum promises to offer a glimpse into the minds of these candidates, and an opportunity for each candidate to make their case that they are the right person to halt the assault on our children, teachers, and schools that’s been carried out by Secretary of Education Betsy DeVos over the last 3 years.

Doing so will require candidates to decide which path to take:

It’s a decision not without its potential risks. A number of the candidates (The Killer B’s: Michael Bennet, Joe Biden, Cory Booker, Pete Buttigieg) have ties of varying strengths to the charter and financial industries–two sectors whose interests are intertwined in complicated and problematic ways–and pivoting away now could mean losing out on that delicious reformy cash flow.

Look for these candidates to try to thread an increasingly narrow needle, expressing their support for “high quality public schools” (code for charters), “educational equity” (code for school choice), “innovative teaching strategies” (code for online and virtual schooling), and cracking down on “for-profit charter schools” (a distinction without a difference); while at the same time attempting to appeal to teachers by calling for higher salaries and better working conditions. It’s a tricky gambit, and depends on a general lack of awareness among the voting public when it comes to public education.

In other words, it’s worked so far.

As for the remaining candidates, Sanders and Warren have already made their education plans public, so it’s really a chance for Amy Klobuchar and Tom Steyer to convince the audience of two things: they care about education, and they’ve thought about what they’d do about education if they happened to become president.

Look for Klobuchar to demonstrate her empathy for the plight of teachers (her mother taught second grade until retiring at 70, and her husband is a law professor), while forwarding a rather tepid approach to a range of education policy issues that’s largely devoid of specifics:

To break out of the pack and earn the support of the nation’s teachers is going to require more than trotting out watered-down approximations of other candidates’ plans and vague platitudes about the “dignity of work” at this point. Education advocates are looking for bold leadership and a strong repudiation of the destructive policies of the DeVos/Trump administration.

The likelihood of any of the persons on the stage standing up and speaking out for any of these policy positions on Saturday is probably between slim and none. But any candidate with the vision, integrity, and courage to do so would find her or himself immediately acclaimed as the champion of the country’s 3.2 million public school teachers, and propelled to the top of the presidential field.

And what a refreshing change that would be: an “education president” who actually believes in public education, and is willing to support our nation’s children, teachers, and schools.

If you want to find out how accurate these predictions turn out to be, please follow Chris Savage (@Eclectablog) and me (@mrobmsu) on Twitter as we report from Pittsburgh on Saturday.