BOOM! U.S. Attorney to Nazis & white nationalist terrorists: “We will do everything we can to be there to stop you”

U.S. Attorney Justin Herdman from the Northern District of Ohio made public the federal criminal charges against Ohio white nationalist terrorist wannabe James Reardon yesterday. In doing so, he made a few perfunctory statements about the charges. 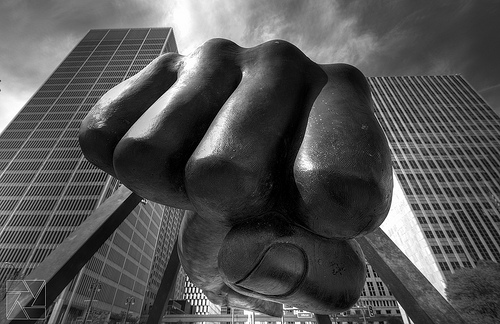 What he said next is worth two minutes of your time to read. He has a powerful message for Nazis and other white nationalist terrorists who want to kill those with whom they disagree. It’s the most edifying thing I have read in a long time and gives me just a bit of hope that our institutions are holding strong against Trumpism and the violence it incites.

The direct link to his official statement is HERE. I don’t know how long AG William Barr will allow it to remain on the government’s website.

Here’s his message to those who would use violence to advance their twisted worldview:

Now let me speak generally to those who are advocates for white supremacy, or white nationalism. I am talking directly to you. The Constitution protects your right to speak, your right to think, and your right to believe. If you want to waste the blessings of liberty by going down a path of hatred and failed ideologies, that is your choice.

Democracy allows you to test those ideas in the public forum. If you want to submit your beliefs to the American people and get their reaction, please be my guest. Keep this in mind, though. Thousands and thousands of young Americans already voted with their lives to ensure that this same message of intolerance, death, and destruction would not prevail – you can count their ballots by visiting any American cemetery in North Africa, Italy, France, or Belgium and tallying the white headstones. You can also recite the many names of civil rights advocates who bled and died in opposing supporters of those same ideologies of hatred. Their voices may be distant, but they can still be heard.

Go ahead and make your case for Nazism, a white nation, and racial superiority. The Constitution may give you a voice, but it doesn’t guarantee you a receptive audience.

Your right to free speech does not automatically mean that people will agree with you. In fact, you have an absolute God-given and inalienable right to be on the losing end of this argument.

What you don’t have, though, is the right to take out your frustration at failure in the political arena by resorting to violence. You don’t have any right to threaten the lives and well-being of our neighbors. They have an absolute God-given and inalienable right to live peacefully, to worship as they please, to be free from fear that they might become a target simply because of the color of their skin, the country of their birth, or the form of their prayer.

Threatening to kill Jewish people, gunning down innocent Latinos on a weekend shopping trip, planning and plotting to perpetrate murders in the name of a nonsense racial theory, sitting to pray with God-fearing people who you execute moments later – those actions don’t make you soldiers, they make you criminals. Law enforcement doesn’t go to war with cowards who break the law, we arrest them and send them to prison.

As I said, this case was made by a concerned member of the public and a responsive police officer. That’s all it takes to stop you. The men and women of our community are allied with law enforcement. And every single member of law enforcement took an oath to protect and defend the Constitution of the United States against all enemies, foreign and domestic. Many of us have taken that oath several times – as police officers, federal agents, prosecutors, military members, and elected officials.

Together, we represent the absolute best of what America has to offer. Our skin is every color you can imagine, our families come from a hundred different countries and a hundred different faiths. What makes us different doesn’t split us apart, though. Those differences are insignificant compared to what is the same about us – we are united in our commitment to each other, to our families, and to our communities. We are the living embodiment of everything you say is impossible.

Together, we are united to ensure that you commit no further acts of violence in the name of your beliefs. When you wake up tomorrow morning, no matter what time, I want you to remember something. You can’t set your alarm clock early enough to beat us out of bed. The men and women of law enforcement don’t wake up. We never went to sleep. We are always awake. And arm in arm with the public, when your hatred leads you to break the law, we will do everything we can to be there to stop you.