The simple case for impeachment (that doesn’t include Emolument Clause violations, conflicts of interest, illegal family separations, and various other high crimes and misdemeanors). 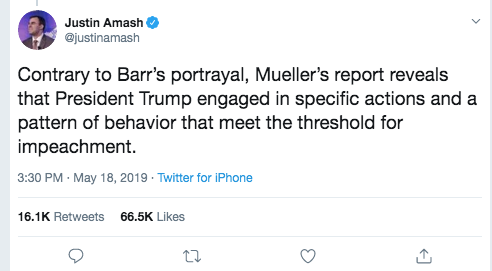 Some have pointed out that the case for impeachment has not be clearly made. These people are probably busy following Democrats in Congress and not Republican Rep. Justin Amash.

It saddens me that some conservatives are more clear-eyed than members of my party about the need to impeach and remove Trump before Trump impeaches and removes democracy. I get the political calculation to run the clock out, largely based on Nancy Pelosi’s successful management of the demise of George W. Bush’s second term, aided by two losing wars and the worst financial crisis of the century.

But this it’s a bet on the 2020 election being fairer than 2016, when the opposite is far more likely to be true, especially given the “perverse consequences” of inaction by the Democratic House.

So for history, nervous Democrats in districts far less Republican than Amash’s, and my own personal reference, below is Amash’s cogent case for impeachment based on a thorough reading of the Mueller Report. It follows a previous a May 20th thread where he exposed the falsehoods some, including Attorney General William Barr, are using to absolve Trump of obstruction of justice crimes and a May 18th thread on his principal conclusions after reading the report.

Like Elizabeth Warren, another attorney, he read the report and came to the only possible conclusion: We must act.

I’m no fan of Justin Amash, who has been an able solider in the political army of Michigan’s DeVos family for years. But he’s clearly engaging in something here that has to be called patriotism, despite his many other abhorrent views that would immiserate vulnerable seniors while crushing LGBT and reproductive rights.  The man explains every votes he takes and is the one elected Republican who has proven that he can put this country above his partisanship and career.

If you want an expansive case for impeachment, get The Constitution Demands It: The Case for the Impeachment of Donald Trump HERE and listen to our interview with Ron Fein. 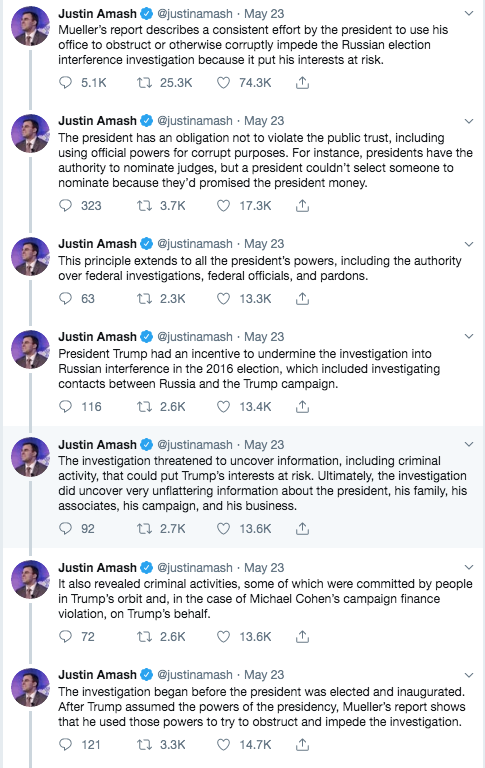 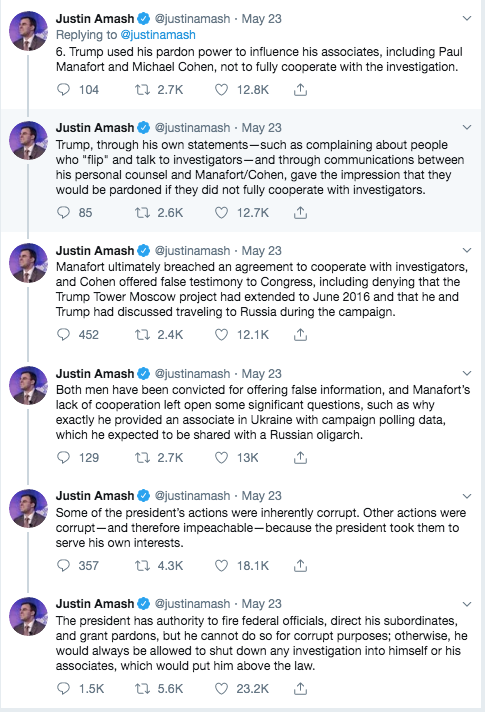