Why impeach NOW?! with special guest Ron Fein from Free Speech for People 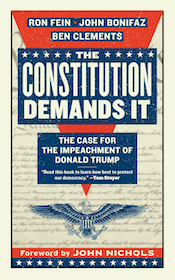 Buy The Constitution Demands It: The Case for the Impeachment of Donald Trump HERE.

This was my gift to my new member class.

"To sin by silence, when we should protest, makes cowards out of men." – from Ella Wheeler Wilcox's poem Protest.

I am making sure we know our power in Congress to hold corrupt elected officials accountable. pic.twitter.com/U3HKPnEZ7J

The eight reasons to impeach Donald Trump are:

Since the book was published, Free Speech for People has added two additional reasons:

#10 – Cruel and unconstitutional imprisonment of children and their families

Kevin M. Kruse and Julian E. Zelizer at The Atlantic: Worse Than Watergate

John Farrell at Politico Magazine: What History Can Teach Democrats About Impeachment

James Madison on impeachment during the 1787 Constitutional Convention: HERE.

Jesse Byrnes at The Hill: Trump can’t recall saying he has one of the world’s best memories

Alexander Hamilton’s “The Mode of Electing the President” from The Federalist Papers: No. 68 HERE.

Brian Fung at The Washington Post: Pelosi tamps down talk of impeachment