Trump doesn’t just encourage violence against journalists. He applauds it.

The only reason Trump-enthralled wannabe terrorists haven’t committed unprecedented acts of violence so far is because they’re bad at terror. 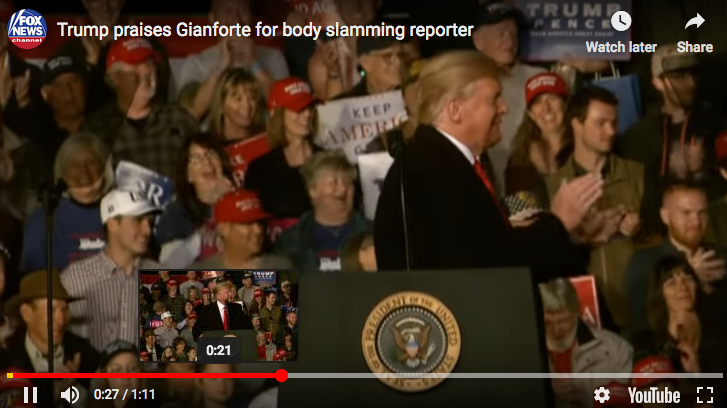 This week we learned that for the second time America was spared from a massive attack by a Trump-enthralled wannabe domestic terrorist.

Trump, who tweets responses to even rumors of terror attacks in London in minutes, waited two full days before making a statement on the plot that specifically targeted numerous journalists and politicians, all perceived adversaries of Donald Trump.

A man who can summon sudden sound and fury for a black director winning his first Oscar somehow remains demure and sympathetic when addressing a wannabe terrorist when the wannabe terrorist is white nationalist who was planning a civil war “if trump impeached.”

Trump’s spokesperson followed up by insisting that Trump has never encouraged violence against journalists. This is a lie. And it’s a lie that sends a dangerous message: the belief that Trump — and, by the transitive property, his fans — can get away with things we’ve seen with our own eyes.

Trump literally applauded a Republican who attacked a journalist. His dozens of tweets calling the press his enemy continue even after a newsroom was shot up and the Trump fan with the Trumpiest van literally sent bombs to dozens of Trump targets, including CNN. And Trump’s rage at the press is never as contained as it was for the Coast Guard lieutenant who wanted to kill “everyone.”

For years now, we’ve been told that Trump’s fans take him “seriously but not literally.” And the point of this Talmudic assertion is that his fans know how to grok the secret messages they are being sent.

Trump followers get that even though they scream that Mexico is going to pay for the wall, Americans in need of emergency services may get stuck with the bill. They get that he contradicts himself, often in the same sentence, and hires undocumented immigrants while smearing undocumented immigrants as criminals. They get it because they see in him someone who understands their anger and directs against the people they despise the most.

The don’t need to believe his words because they believe his racism and his belief in reinforcing a conservative order where white straight conservative Christian men, and the doting subordinates who serve them, dominate without question.

Trump is a human dog whistle.

This silent but clear messaging nurtures a belief is so strong that it’s developed a violent subculture. These delusional misfits cling to a bloodthirsty yet self-refuting conspiracy that imagines all their perceived will be thrown in jail then executed for their participation in an international child trafficking ring that only Donald Trump would dare go after. They believe this, despite Trump’s fondness for walking in on contestants in the teen beauty pageant he ran. They believe this, though we found out this week that Trump’s good friend was spared the full consequences of his sex crimes, which seems to include raping dozens of under-aged girls, thanks to a deal made by Trump’s Secretary of Labor.

Trump knows his followers love reading through his messages. The contradictions and winks heighten the sense that he’s speaking to them and remains supportive of anything they can do to help him.

But even if he hadn’t literally winked at David Duke and the Nazis who marched in Charlottesville, they would get he was on their side by the way he’s normalized their deranged smears of immigrants and made persecution of brown people official policy. That’s why hate groups are multiplying.

After 11 people were murdered in a synagogue, Trump epitomized his dog whistle approval of hate and the violence it inspires. He went to Pittsburgh to join the mourners, but he kept on echoing the antisemitic tropes about “Soros” funding the refugee caravan that at the very least rhymed with the  motivation the killer cited for targeting the Tree of Life congregation.

Trump knows he can’t explicitly call for violence just as he can’t use actual racial slurs. But he also knows that his mixed messages send a clear message to his fans. And that message is that violence may be necessary, so stay tuned.