GOP House Speaker Chatfield’s comment that AG Nessel and Gov. Whitmer are “driven purely by emotion” is TOTALLY NOT SEXIST AT ALL, says Chatfield 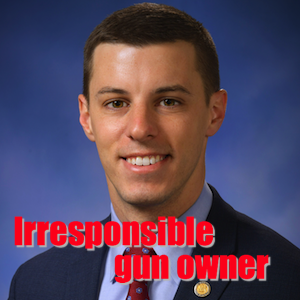 The Republican Speaker of the House in Michigan’s legislature is Lee Chatfield, a 30-year old father of five and graduate of Jerry Falwell’s Liberty University who attempted to bring a loaded handgun onto a commercial flight last summer. In a recent interview, Chatfield characterized Attorney General Dana Nessel and Governor Gretchen Whitmer as “driven purely by emotion” in their decision to shut down the dangerous Line 5 tunnel plan rammed through the lame duck session late last year:

Critics said Wednesday that Chatfield, without any basis, drew on a stereotype about women that is used to undermine female political leaders.

Chatfield rejected the criticism, through a spokesman.

In a Monday radio interview on the Frank Beckmann Show on Detroit’s WJR-AM (760), Chatfield, R-Levering, said “we all want to protect the Great Lakes,” but “we also have to use sound science when we’re trying to do that, Frank, and we can’t be driven purely by emotion.”

The Detroit Free Press article quoted here goes on to highlight analysis from experts of this TOTALLY NOT SEXIST AT ALL! stereotyping of Michigan’s two most powerful women. They explain in detail why characterizing women as “emotional” is a demeaning tactic that goes back to the first time a women had the audacity to run for a leadership position of any kind.

But, let’s be honest: We don’t need historians and university professors to explain this to us. Women face this sort of sexist BS every day of their lives and in nearly every element of their lives. Comedians and comedy shows use it as a gag line. Women are denied well-deserved promotions because of it. Female candidates could become non-emotional automatons and they’d still hear it.

Chatfield claims that his comment was TOTALLY NOT SEXIST AT ALL! and his spokesperson WHO IS NOT DRIVEN PURELY BY EMOTION BECAUSE HE’S A MAN said that reading “into his statement any more than [looking for ways to protect the Great Lakes and still deliver necessary energy resources] is even more political than the original decision itself.” Right. Got it. See? TOTALLY NOT SEXIST AT ALL!

Mr. Chatfield should choose his words more carefully rather than let his emotions like feeling intimidated by powerful women get in the way. If he wants to use science as the excuse for his sexist comments, we would welcome all Republicans finally adopting the same position when it comes to the Great Lakes, as well as women’s healthcare, climate change, and a host of other areas where facts and figures should guide our decisions rather than emotion or dogma.

No word yet on whether Mr. Chatfield thinks Ms. Barnes is being too emotional.