There they go again.

This important essay was written by Mike Jackson, executive secretary treasurer of the Michigan Regional Council of Carpenters and Millwrights union.

Please contact your state legislator and ask them to vote NO on House Bill 4406. 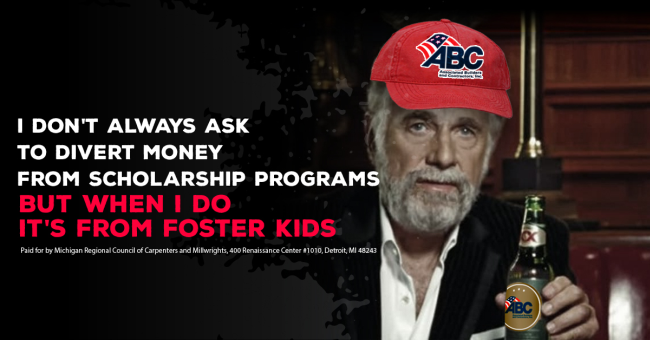 The Associated Builders and Contractors (ABC), an anti-union organization, is hoping taxpayers further subsidize their failed training programs. This time, ABC wants to take money from a scholarship program designed to help foster children go to college and funnel it to their training programs that simply don’t measure up to the programs offered by joint skilled trades training centers. The bill ABC is trying to shove through the legislature is a blow against education and job training and needs to be defeated.

House Bill 4406, introduced by Representative Greg Markkanen would extend the Fostering Futures Scholarship, which helps foster children attend college, to skilled trades programs. What Markkanen and ABC don’t want us to know is that the best skilled trades programs, those offered by unions such as the Carpenters and Millwrights, Laborers, Operating Engineers and others are already tuition free and come with a job offering excellent wages and benefits. ABC doesn’t offer anything like that. The training programs offered by ABC are not tuition free and the quality of their programs is suspect at best.

To make up for the fact that young people looking to enter the skilled trades need to find money to get into their programs, ABC is constantly looking to manipulate tax-funded programs. In a move that should surprise no one at all, ABC is now tweeting support for HB 4406, which would take money from college-bound foster children and funnel it into the pockets of ABC.

The Fostering Futures Scholarship is a program for students who were in foster care due to abuse and/or neglect during their teen years to attend a Michigan private or public degree-granting college or university or a community college. This is a good program that gives students who faced child abuse and neglect a chance to attend college. ABC, in its quest to find sneaky ways to fund itself is now seeking to abuse this system – neglecting needy students of a chance to attend accredited colleges.

ABC has a history of shady practices when it comes to running a skilled-trades program. As a matter of fact, ABC recently was called out for low graduation rates at their so-called schools. Instead of admitting they have low graduation rates and seeking to improve, ABC blamed the students – claiming they didn’t report their hours to the Department of Labor. This is despite the fact that students are not able to do their own reporting and is the job of the program.

Moreover, a study of the ABC-sponsored registered apprenticeship programs shows their offerings pale in comparison with those offered by the constructions trades at no cost. Among the findings are the fact the ABC programs focus mainly on only three trades: electrical, plumbing and pipefitting meaning students are not offered a diversified portfolio of occupations to choose from and learn.

It’s clear that the ABC apprenticeship program is not a good solution for children who would otherwise choose to use their Fostering Futures Scholarship to attend college or enroll in a successful joint program with a track record of training success and a career path. Moreover, ABC has shown themselves to be more interested in lobbying than in creating quality skilled trades training programs. As a matter of fact, ABC is best known for lobbying and spending millions of dollars to repeal Michigan prevailing wage law which will lead to lower pay for skilled trade workers – certainly a loss for any student who chooses the trades. Instead of spending their time lobbying in Lansing, the leadership of ABC should roll up their sleeves and get to work fixing their broken training programs.

While the training programs offered by the Michigan Regional Council of Carpenters and Millwrights gives people a hand up and good career, ABC is back in Lansing with their handout seeking our tax dollars to prop up their bad training programs. House bill 4406 should be dead on arrival in the Michigan legislature.