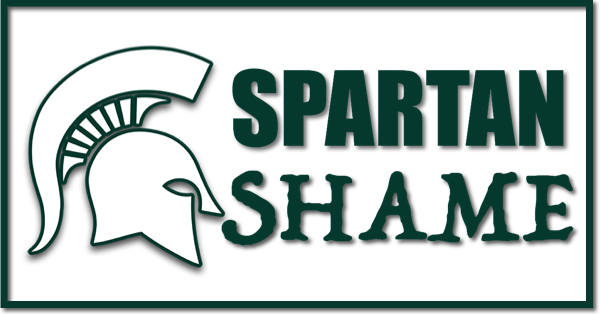 I have always had special disdain for former Michigan governor John Engler. He was the grandfather of the corporatist right’s attacks on organized labor while he was in office and his repugnant legacy is something that we still deal with today. So I was shocked, dismayed, and outraged that the Michigan State University Board of Trustees chose Engler to be the interim university president after the former president, Lou Anna Simon, resigned in disgrace due to her failed leadership and possible culpability in the Larry Nassar rape scandal. She has been charged with lying to investigators.

Engler quickly lived down to my low expectations as the president of my alma mater, treating women raped and assaulted by this monster as if they were grifters who were only attempting to enrich themselves.

Now that he’s gone and our state has an Attorney General who actually cares about the women Nassar assaulted as the country’s most notorious serial rapist, Engler has been asked to come in to answer some questions from Dana Nessel and her staff. And that is where Engler is showing his true putrid colors.

Derek Robertson, a crack journalist at the most-excellent Michigan Advance, obtained correspondence between Engler’s lawyer Seth Waxman and the AG’s office. In the emails Robertson obtained, it’s immediately clear that he has lied about Engler’s availability for an interview:

In emails obtained by the Advance through a Freedom of Information Act request, Waxman told [Assistant Attorney General Christina] Grossi in late February that Engler would be available for three days in late March and that he did “not have plans to be in Michigan during that time frame,” hence the investigators’ planned travel to Washington.

In an email dated March 4, Grossi voiced concerns about potential “forum shopping” — lying to law enforcement is penalized less harshly in the nation’s capital than in Michigan — but agreed to Waxman’s terms, noting she appreciated that Waxman “verified” Engler would not “be in Michigan any time in the near future.”

In his response this week to the letter canceling the interview, Waxman claimed that the AG’s office “first offered to conduct the interview in Washington, DC or Virginia near where Mr. Engler currently resides,” and that “that request was not lodged by [Waxman] or Mr. Engler.”

In a Feb. 27 email to Grossi obtained by the Advance, Waxman wrote the following:

“We are available March 26, 27 or 28 for the interview… Mr. Engler does not have plans to be in Michigan during that time frame, so we ask that the interview take place in Washington, DC.”

When sports blog Deadspin published a report this week regarding Engler’s appearance at recent MSU basketball games, including their March 9 game against the University of Michigan at the Breslin Center in East Lansing, Grossi wrote a scathing email to Waxman canceling the interview.

Sure enough, there is plenty of proof that Engler has all the time in the world to watch MSU play, not only in the NCAA tournament, but also to watch MSU play the University of Michigan IN MICHIGAN on March 9th

Grossi is, of course, appropriately outraged and disgusted:

“Your client’s brazen disregard for this investigation and his willingness to lie about his whereabouts is not only appalling but does a terrible disservice to the university,” Grossi told attorney Seth Waxman in an email Tuesday.

“As an alumna of Michigan State, I’m embarrassed that our university’s former president can make time to attend basketball games but not to sit to discuss the largest sexual assault scandal in the history of higher education,” Grossi wrote.

And now, to add to his astonishing level of chutzpah and cocky disregard, Engler refuses to cooperate unless Grossi recuses herself:

“What has become clear is the ethical standards and objectivity required for the conduct of an investigation are inapplicable to your approach to Mr. Engler,” says a letter sent Wednesday by Engler attorney Seth Waxman of Dickinson Wright to the AG’s office. The letter was sent to Michigan Assistant Attorney Christina Grossi, who has been running the case for Attorney General Dana Nessel. “You have prejudged Mr. Engler’s veracity and motives without ever talking to him. You have launched unfounded attacks and besmirched Mr. Engler. …

“Your conduct diverges so drastically from the most basic principles of fairness, justice and what is right that you have undermined the integrity of your own investigation, which may be a result of your lack of experience handling criminal prosecutions (this being your first), let alone a high-profile criminal investigation. Your actions also form a claim of prosecutorial misconduct and constitute grounds for your immediate recusal from the investigation.”

This insulting and demeaning attack on Grossi is clear evidence that Engler is terrified that he’ll be exposed for his role in making sure that Nassar survivors don’t receive the justice they deserve.

The AG’s office is trying to get the MSU Board to force Engler to comply in light of his blatantly arrogant intransigence and sent them a letter informing them of their legal grounds for doing so:

John Engler appears to believe he is above all of this and has no need to answer for his actions as interim MSU president. Our new AG and her team appear poised to disabuse him of that entirely false notion.