In August of 2015, the year before he was elected president, Donald Trump had a clear and concise message for auto workers: You make too much money.

He said U.S. automakers could shift production away from Michigan to communities where autoworkers would make less. “You can go to different parts of the United States and then ultimately you’d do full-circle — you’ll come back to Michigan because those guys are going to want their jobs back even if it is less,” Trump said. “We can do the rotation in the United States — it doesn’t have to be in Mexico.”

Leading into the 2020 election, Trump told union workers in Lima, Ohio this week that they should cut their own throats by kneecapping the unions that negotiate their wages, benefits, retirement packages, and working conditions and, in the process, blamed the cost of union dues for General Motors’ decision to close a plant in Lordstown:

But before Trump told workers at this plant they don’t need to support their union, he planted a seed by telling them a direct and provable lie (in chart form):

I used to campaign — I’d be in Ohio, I’d be in Pennsylvania, I’d be all over, and I’d talk about wages where people would have to work three jobs and they were making less than they did 20 years ago. You remember that, Rob? Jim? I used to do it all the time. I’d be — it was just a part of my speech. I’d say, “You’re working three jobs. You make less money than you did 20 years ago.” And it was literally 21 years. And now wages are going up.

Here’s what the trend on wages has actually been: 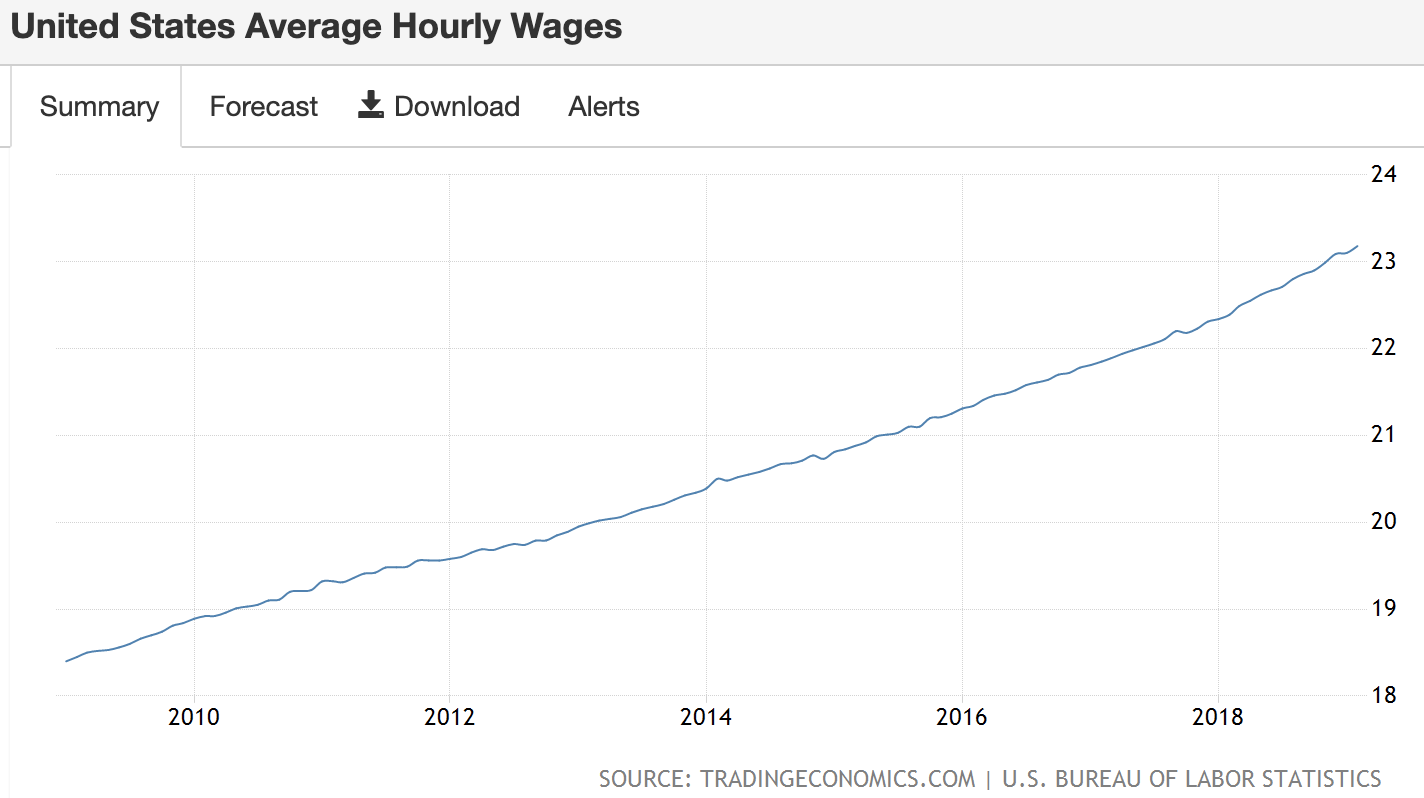 Looking at growth, 3.4% isn’t even close to what it’s been for the past decade: 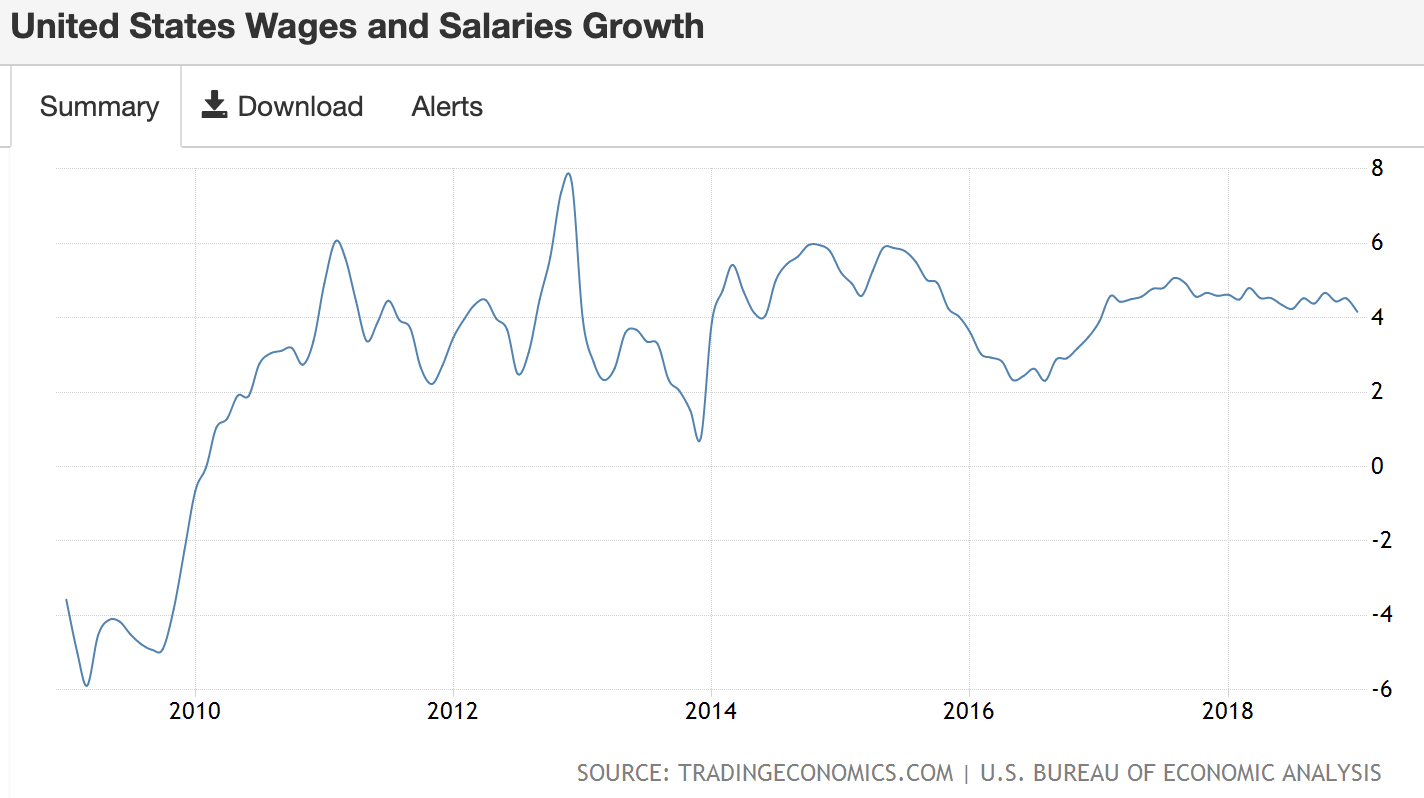 Since President Obama got the economy back on the rails, wage growth has been pretty steady. Not as large as we’d like of course, but Trump wants workers to think the economy is finally booming so that they don’t give Obama any credit for beginning a period of growth that’s been strong and steady for ten years.

He also looked at these workers at the Lima Tank Plant and told them that the GDP hasn’t been this high in over a decade:

And we just came out — another chart — we just came out with numbers — the Economic Report of the President: 3.1 percent GDP. The first time in 14 years that we cracked 3, right? That’s pretty good — 3.1. 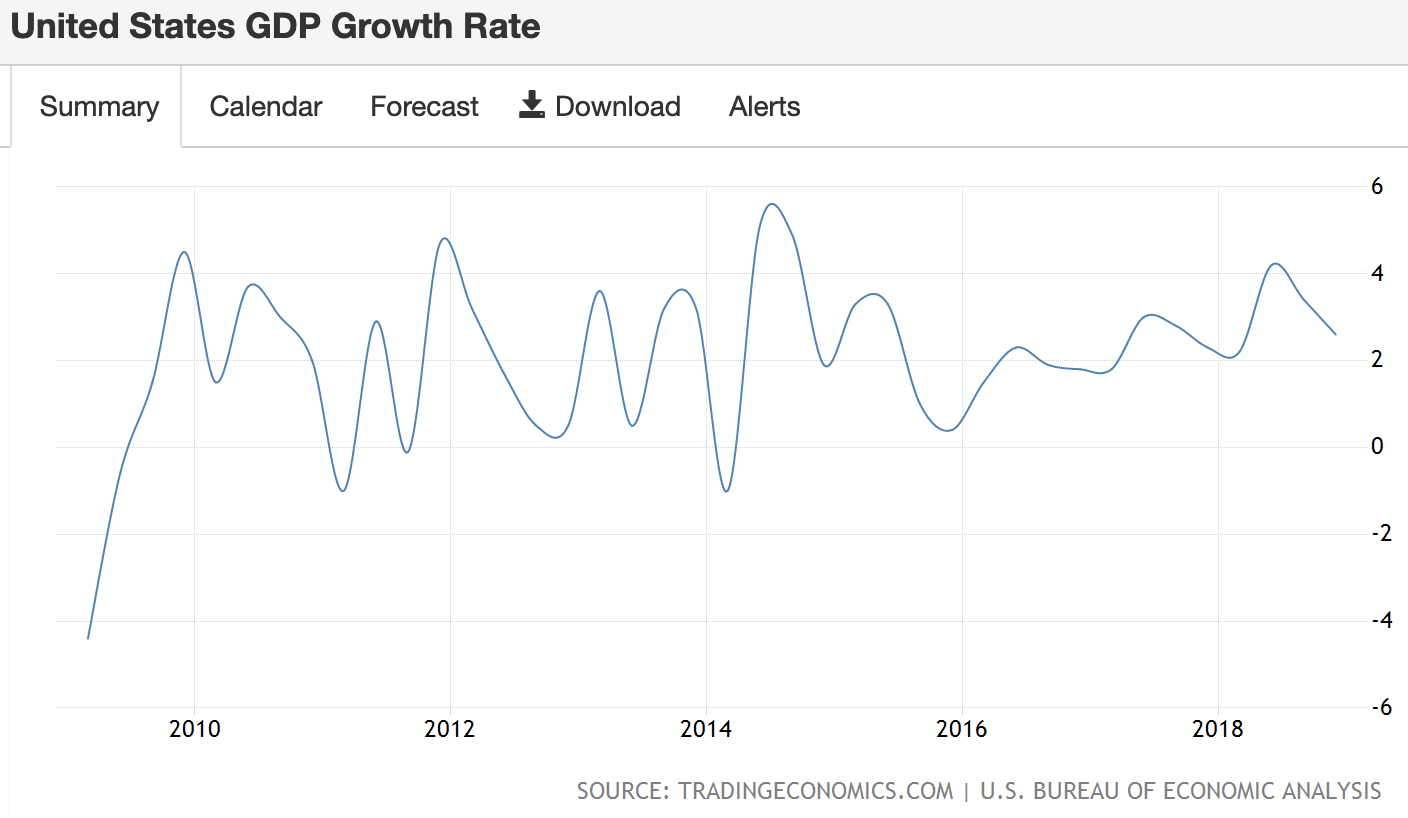 GDP growth has been over 3.1% many times in the past decade and, like wages, the GDP itself has been on an upward climb since Obama got things set straight: 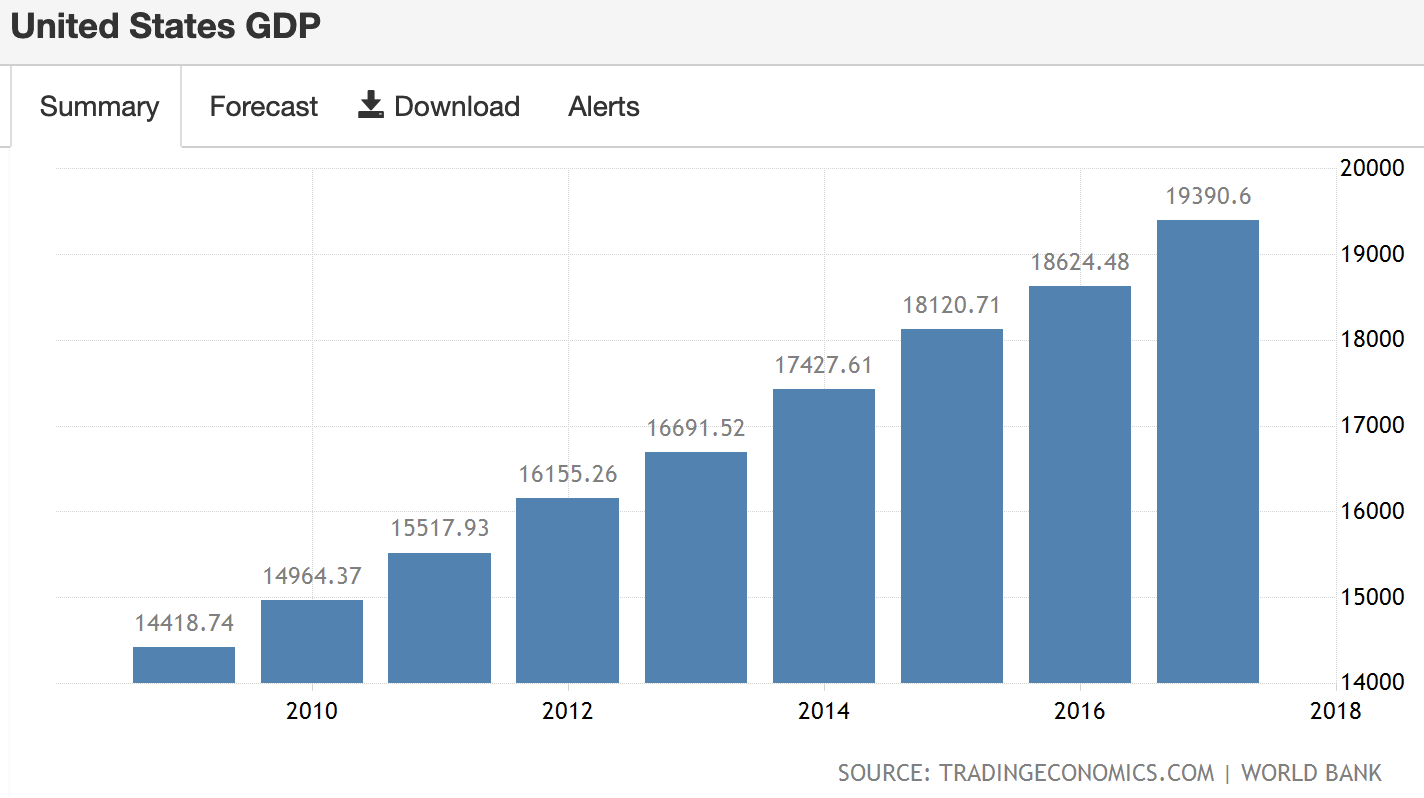 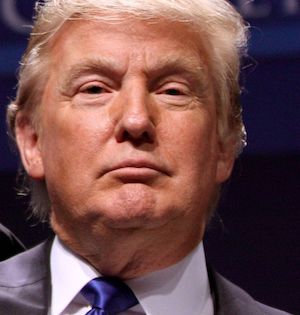 It’s not hard to figure what Trump is doing here. He wants union members to think that, thanks to him, the economy is robust and wages are rising. And that, because of this, they don’t need their unions and shouldn’t have to pay to support them. He’s already signed Executive Orders to harm federal government union employees and is ready to sign national right to work into law if a bill ever hits his desk.

A significant share of union members voted for Donald Trump. The reasons are many but a significant one was that Trump’s campaigning targeted them specifically, making them fearful that foreigners will take their jobs and promising to be their advocate. Democrats, a longtime ally of labor, simply didn’t make this a central part of their campaign. Union members who voted for Trump weren’t stupid. They were duped by a man who has made a career out of duping people by the shear force of his personality and, sadly, they are among a long list of people he has swindled.

What’s important now is for union members to do something about the fact that Trump lied to them then, has lied to them since, and is lying to them now about his support and advocacy on their behalf. His goal is a country with high employment, low wages, and weak unions. This is the Holy Grail for America’s corporations and there are few people who are powerful enough to deliver it like Trump is now.

Conservatives and liberals may disagree on many things but I think something we can all agree on is that you cannot trust Donald Trump to deliver on his promises unless it directly benefits him or his powerful allies in corporate America. I can understand why conservative workers voted for him in 2016 and it is my sincere belief that these men and women are savvy enough and wise enough to see Trump for the con man that he is and not be fooled again.

Oh, one more thing. The union IS going to reduce dues. Just as soon as they build up their strike fund so that they can increase the daily pay union members will get if they are forced to go on strike:

The union responded by saying it has already put in place a plan for members’ dues to be lowered to their pre-2011 level as soon as the strike fund reaches $850 million.

Rothenberg said that at the UAW’s convention last year, the union decided that once the strike fund hit the required amount, dues would return to a level they had been at since the 1960s until the change in 2011.

The union this month at its bargaining convention in Detroit said it would raise its strike pay from $200 a week to $250 as it heads into contract talks this summer with GM, Ford and Fiat Chrysler Automobiles.