Alexandria Ocasio-Cortez: Let’s “turn the ship around” on education policy 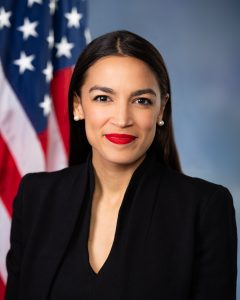 A lot of public school advocates have become pretty disillusioned trying to find a politician from either party who seems to actually “get it” when it comes to public education. So many teachers and parents are yearning for a candidate who supports traditional public schools, recognizes charter schools as an expensive, unnecessary, and dangerous distraction, and reject all efforts to privatize our schools via vouchers, or “education tax credits,” or “education freedom scholarships,” or any other patriotic-sounding euphemism the neo-liberal ed reformers come up with.

But who are our options?

So, reading this recap of a recent meeting of public school parents and activists in New York City was an astonishingly fresh breath of air. I’m sure it didn’t hurt that Diane Ravitch, perhaps the most vocal defender of public schools, teachers, and students today, was on the panel:

(Alexandria Ocasio-Cortez) nodded in agreement when Diane Ravitch, historian and author of The Death and Life of the Great American School System, criticized anti-democratic efforts to privatize public goods and encouraged parents to resist by refusing standardized testing for their children. When AOC had the floor, she made a strong call to “turn the ship around” on education policy. She talked about her own parents’ painful decision to leave their Bronx community for Westchester and better schools for their children and how, decades later, a similar set of “perverse incentives” led her cousins to enroll their kids in charter schools “because the public schools in Hunt’s Point didn’t feel good enough…We should never feel that way. And the moment we start feeling that way is the moment we should start fighting to improve them. Not to reject them.

The moment we start feeling that one of our public schools isn’t “good enough”, instead of immediately looking for “alternative options,” or a “high-performing charter school”, or demanding “educational freedom,” or “more school choice!”, we should be demanding–not asking, or pleading, or wondering–but demanding to know why this “hollowing out” of our public schools is being tolerated in the first place, and fighting to improve them.

For too long we have uncritically accepted the neo-liberal framing of the debate about public education as one of “failing public schools” vs. “high-quality charter schools”–when we know that charter schools, on average, do about the same as traditional public schools when it comes to students’ educational attainment–and that some charters do significantly worse.

Rep. Ocasio-Cortez also shared a personal anecdote that managed to reframe this debate rather masterfully:

Her father, growing up as one of five people in a one-bedroom apartment in the Bronx, had attended Brooklyn Tech, one of the specialized schools. He woke up at 5am each morning to ride the subway there because, she explained, going to such a selective school was “seen as the only way to have a dignified life.” She explained that despite this exhausting routine, her father “loved his experience at Brooklyn Tech, because he went to a good school.” And here, she deftly reframed the whole debate, “My question is, why isn’t every public school in NYC a Brooklyn Tech-caliber school? Every one should be.”

The “choice” in school choice initiatives lies all too often not with kids, and parents, and families, but with charter school admissions processes, lotteries, and charter school management corporations. As I’ve written before…

“School choice” is a false choice. No parent should have to move their child to a different community to find a “safe” school, or feel that they have to play the lottery to get their son or daughter a quality education. School choice policies are making it harder and harder for public schools to offer rich, diverse programs in safe, well-maintained facilities as increasing levels of resources are diverted to charter and private schools under the twin guises of “school choice” and “accountability,” leaving under-resourced schools ripe for the plucking.

There is nothing “reasonable” about the reformers’ agenda of more tests, more accountability for teachers and schools, more charter schools, and more school choice.

Schools are not grocery stores or dry cleaners — when schools close, families are torn apart.

Schools are not businesses — when the product doesn’t meet externally-dictated expectations, you can’t simply toss out the parts and get a new shipment.

Children are not widgets — when they struggle, we don’t discard them; we teach them differently, coach them harder, and love them more.

School choice is just another tired track from the same old reformers’ playlist, repackaged as an issue of “social justice” from those who don’t advocate for social justice in any other arena. But the end game is the same: punish students and teachers, destabilize schools and communities, and turn the public schools into private profit centers.

I can guarantee you that your friends and neighbors teaching in those public schools (because that’s who they are; not “union thugs,” or “rubber room denizens,” or “lazy lugs leaching off the public weal and enjoying their summers off,” or whatever slur the ed reformers think will gain traction with the uninformed voters that form their base–they are your neighbors, and your relatives, and your friends who have dedicated their professional lives to teaching your kids) would really appreciate your support, and knowing that their community is invested in their schools.

To all those politicians out there struggling to figure out how to be a “public school supporter,” here’s how you do it:

And to all those parents out there who want to send their children to the best schools possible, vote for politicians who follow the suggestions above, and demand your elected officials to “turn the ship around” on education policy. Our kids deserve nothing less.