Anti-labor hypocrisy is clear as day in lame duck bill to kneecap (some) unions in Michigan. Again. 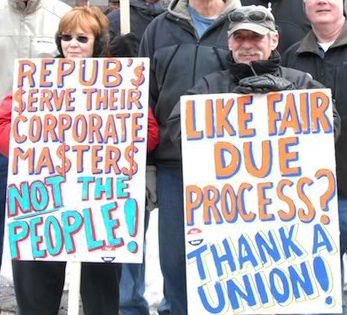 This week marks the painful beginning of the lame duck (or, as I call it, “enflamed duck”) session in the Michigan State legislature. With a Democratic governor about to take the reins, Republicans are hell-bent to pass as much regressive legislation into law as they can before Gov. Gretchen Whitmer moves into her new office.

One of the worst is an effort to stop union leaders from being able to take paid leave to do their jobs as union stewards, etc. The bill being considered is Senate Bill 796, introduced by Republican Senator Marty Knollenberg. It’s hard to state the intent of this bill better than Democratic Senator Vincent Gregory did:

“Bills like this only serve one purpose — they’re just another step in the systematic destruction of unions and workers’ rights,” said Sen. Vincent Gregory, a Southfield Democrat and retired sheriff’s detective who was a union leader. He said union leave time arrangements are an efficient, cost-effective way to quickly resolve employee disputes, disciplinary issues and other matters, and they help not just workers but also management.

The amount of money this saves is trivial (less than $3 million a year statewide) but the true hypocrisy is revealed not by who it hurts but by who it protects:

The proposed restriction would not apply to police, firefighters, corrections officers and employees of a transit authority that seeks or receives federal funding.

Knollenberg said the “work scope” for teachers differs from the job functions of law enforcers and emergency responders, who must “react at a moment’s notice” while educators can handle collective bargaining issues “any time” after classroom hours are over. Opponents counter, however, that the legislation would make scheduling meetings between teachers and administrators more challenging, adding that release time saves districts on human resources costs.

If this was being done as a matter of some convoluted principle that union leaders should have to do their work on their own dime, this legislation would be applied to ALL union members. However, as they have done nearly every other time when they attack workers (like when they made Michigan a Right to Freeload/Right to Work for Less state), Republicans carve out exceptions for groups they feel will support them politically in the future. So this is purely an attack on teachers and other government employees.

Republicans even rejected a reasonable amendment by Democrat David Knezek:

Knezek said he had no problem codifying a ban on using public dollars for political purposes, which is already illegal. But allowing union representatives to help settle workplace grievances during business hours can help save money, he argued.

In other words, there is no “principle” involved here other than the well-established Republican principle of diminishing the ability of workers to collectively bargain for decent wages, working conditions, and benefits. They already have workers fighting for these things with one hand tied behind their back. This legislation lops off one of their feet, too.

The bill has already passed the state Senate where every single Democrat voted against ti. It is now in the House Committee on Education Reform. The fact that this is in THAT committee just proves that this is a blatant attack on teachers.

Make sure you contact your state Senator and state House Representative today and tell them to vote NO on SB 796. You can do that HERE.