I don’t know how to describe this exactly. It may be the most insulting thing anyone in the Trump administration or campaign has done to Jewish Americans. Mike Pence invited “Rabbi” Loren Jacobs to give the invocation at his Michigan campaign stop today. Jacobs is actually a Christian who leads a group who call themselves Messianic Jews. He spent eight years with the group Jews for Jesus. In his blessing, he actually says he’s not Jewish: “God of Abraham, God of Isaac, God of Jacob, God and Father of my Lord and Savior Yeshua, Jesus the Messiah, and my God and Father, too.” For Messianic Jews, Yeshua = Jesus. (More on Jacobs HERE.)

Imagine inviting an imam to do a eulogy for slain Christians, dressing him up as a priest, and have him start with a prayer to Allah. That's basically what Pence just did. https://t.co/boUe3nxdo4

For the gentiles who follow me: this is like inviting someone in blackface up to offer solidarity for the African-American community. Fuck this horrible administration. https://t.co/YOv1lcq65m 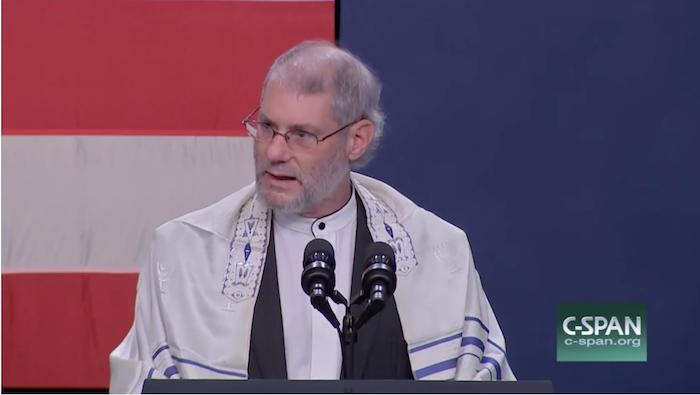 Coming the day after the horrific right wing extremist terrorist attack on the Tree of Life synagogue in Pittsburgh, it’s hard to comprehend but given Pence’s evangelical approach to all things, it’s hard to see this as an accident.

Jewish people are responding with outrage around America.

This is disgusting. Messianic Jews are an evangelical-backed movement meant to convert Jews who are disengaged with Judaism to Christianity. They're a missionary movement, and a predatory one at that. https://t.co/duBcj0ZodE

UPDATE: Vice President Pence is blaming Lena Epstein, a Jewish Republican who is running for Congress in Michigan’s 11th Congressional District against Democrat Haley Stevens, who he said invited the “rabbi”:

Team Pence says: "He was invited by Lena Epstein to offer a prayer at the event, which he did early in the program. The VP invited him back on stage to deliver a message of unity. He was not invited by the VP’s office to speak on behalf of the Jewish community.”

Despite throwing Epstein under the bus, here’s Pence introducing Jacobs as “a leader in the Jewish community” to give a prayer for the actual Jewish people who were slaughtered in Pittsburgh:

UPDATE 2: Epstein is either falling on her sword for Pence or is admitting she invited a fake rabbi widely despised by actual Jews to give a prayer honoring actual Jews who were murdered only a couple days before by a vicious anti-Semite. Either way, she has certainly doomed her campaign and Haley Stevens will be the woman, a Democrat, who replaces the odious David Trott, a Republican, in Michigan’s 11th Congressional District:

UPDATE 3: Despite the fact that Jacobs was there ostensibly to say a prayer for the people murdered in Pittsburgh, he was mostly there to play politics:

He did not name the individual victims of the Pittsburgh massacre, but named four Republican candidates, including Epstein. “I pray for them and for the Republican Party and its candidates so that they would honor you and your ways, that you might grant them victory in this election,” he said from the stage.

WASHINGTON, D.C. – After Saturday’s horrific massacre in Pittsburgh, all Americans have an obligation to speak out against anti-Semitism and hatred. On Monday, Mike Bishop and Lena Epstein did the opposite, demonstrating a failure of leadership when they stood by as a Messianic Jewish preacher invoked Jesus at a campaign rally with Vice President Pence.

So-called Messianic Jews are not a part of the Jewish community, and espouse views considered deeply offensive. In choosing this individual to give a “unity prayer” at the Pence campaign rally, Epstein demonstrated that she lacks both the judgment and understanding to lead Michigan’s 11th Congressional District.

Epstein and Bishop are out of touch with interests and values of the Jewish community and many of their constituents, who would like to see leadership in the face of adversity and division. On Monday, Epstein and Bishop silently stood on the wrong side of history at a critically important time, which is yet another reason the Jewish Democratic Council of America strongly supports and endorses their opponents, Elissa Slotkin and Haley Stevens.

UPDATE 5: Hold the presses. Turns out Jacobs isn’t a fake rabbi. He’s just a fake. Even his own organization disowned him:

“Loren Jacobs was stripped of his rabbinic ordination by the UMJC [Union of Messianic Jewish Congregations] in 2003, after our judicial board found him guilty of libel,” Monique Brumbach said in an email. […]

Meanwhile, mainstream Jewish leaders and experts on the faith said they could not fathom why GOP congressional candidate Lena Epstein, herself a longtime member of a Detroit–area synagogue, invited Jacobs at all to her rally Tuesday because in their eyes he’s not even a real Jew, let alone a rabbi.

“We don’t even recognize him as a rabbi,” Rabbi Marla Hornsten, past president of the Michigan Board of Rabbis, told NBC News. “Even to call him a rabbi is offensive.”