Brett Kavanaugh’s confirmation is a sober reminder of the corruption in both our political and our legal system. An undeniable proof that decency and human dignity in the present do not outweigh an insatiable thirst for power and authority. Individuals who seek to exert control over the vulnerable limit access to justice. The 50-48 vote was no surprise. We should not be taken aback by the reality of the problems in our country that have led us to this point. Today is proof that our politicians do not represent the values of their constituents. They do not stand up for what is right, they vote to keep themselves in office.

The mere fact that the Supreme Court Justice is voted in through the US Senate and is a life-time appointment makes it very difficult for the American people to have a say in the matter. We saw the images of protesters gathering in Washington D.C. and screaming “shame!” as the traitor Manchin cast his vote. They showed up, knowing that they may not change the outcome of the vote. They knew that Kavanaugh’s confirmation would be worse than the election of President Donald J. Trump. They were taunted, threatened, and arrested for protecting their rights and the rights of their loved ones. Along with Dr. Christine Blasey Ford, they are fighting the very authority that pressures them to remain silent. 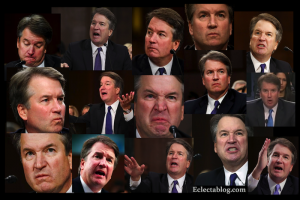 A man who is accused of sexual assault, who brags of his accomplishments while openly siding with Republicans, who plays victim when he is not – this is the man who will now make some of the most important decisions about American livelihood until he passes away. A man who boasted of how he was consistently under scrutiny during his previous appointments could not handle the accusation; how can he handle the pressures of being a Supreme Court Justice? His facial expressions throughout his testimony were evidence of his inability to treat others with fairness. For generations to come, Brett Kavanaugh will be a hated figure in history, as he should be. He and the people who backed him will forever regret their actions, as they should.

Disgusting politicians have found community in their immorality, and continue to support each other in their endeavors to oppress the American public. In their mafia-like fashion, they protect each other’s interests at the expense of others’ lives. Which is why it is vital now more than ever to vote. While the outcomes of the midterm elections will not reverse today’s tragedy, we have to take back our country in any way that we can. We have one month until we can decide whether power should remain with the few who consistently oppress, or whether power should go to the people. It’s time to make a choice.