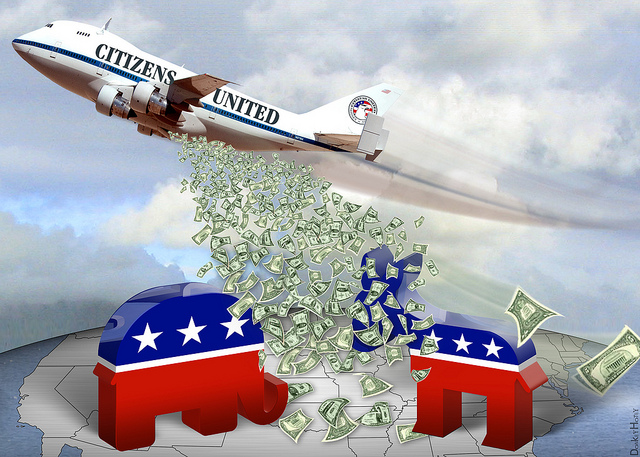 Think about the last time you got a call from Senate or Congress at the federal level asking for money. You either gave little or hung up the phone. Then think about that time you asked for yard signs and volunteered – there is a high probability that someone complained about the fact that the campaign office does not have enough resources. These offices rely on people donating furniture and supplies, because apparently “campaigns are always short on money”.

So how is it that some candidates manage to raise obscene amounts of money and win elections? Why are candidates having to raise more money than before, despite the fact that many everyday voters do not donate?

Craig Mauger, Executive Director of the Michigan Campaign Finance Network, has been working for years on the role of money in politics. The nonpartisan and nonprofit organization focuses on improving the transparency of the influence that money has in elections and policy legislation. According to his observations, there is now more money being poured into politics across the country for a variety of reasons:

Craig was quick to point out to me that Michigan is ranked 50th/50 in transparency and accountability in campaign finance (ouch…). In fact, Michigan is one of two states that doesn’t require their candidates to disclose their personal finances. It does not impose the FOIA act on the office of the governor and the legislature. In every way possible, we are the worst state in the entire country when it comes to campaign finance regulations.

It also does not help that in 2013 Governor Rick Snyder passed a bill to double campaign contributions from individuals and independent PACS. For instance, where the maximum individual contribution for a governor’s race was previously $3,400, it is now $6,800.

Increasing the maximum limits actually makes fundraising efforts less horizontal in nature. Instead of reaching out to all voters across the district to raise money, candidates are going to focus on a top-down approach and prioritize the wealthy for support. Why would a candidate want to “waste time” on the individual who would give $25.00 when deep-pocketed donors could throw around $3,000.00? We see that a larger percentage of the money in politics across Michigan actually come from a smaller number of people. In turn, those few have a more powerful influence on elections and government policies.

The role of dark money is also quite prevalent in the state of Michigan, in tandem with national trends. Even in local races, Super PACs are creating flyers and negative attack ads to ensure that their candidate pulls through the election. As Craig points out, the benefits of dark money are not just reserved for Republicans. While Democrats can certainly argue that they have been working on campaign finance reform and that they did not vote for Rick Snyder’s changes in 2013, both parties are responsible to some degree for taking advantage of our state’s weak campaign finance laws.

Personally, I believe that it’s less about how much a candidate raises and more about where the money is coming from. And while it’s great that there are people/organizations that are willing to flash some dollar bills, we also have to think about who we leave behind in the process. Analogous to the ways that gerrymandering prevents fair and free elections and makes citizens feel that their votes don’t matter, unfair campaign finance laws prevent everyday people from believing that their contributions matter.

Why should you care?

The people of Michigan have been duped in every way. Our current campaign finance regulations mean that candidates are forced to serve special interest groups and vote according to their policy ideals, instead of serving the citizens of their district. Otherwise, these heavily influential groups are not going to financially support the candidate in the next election cycle. While many candidates do genuinely want to be elected so that they can serve the people, the reality is that the road to office and the journey afterwards are often impossible without the support of these wealthy donors.

But why should the everyday voter care about campaign finance? We can talk about the influence of money in politics on a very meta level, but how does it affect how we vote and how we live our lives once politicians are elected?

Super PACs and corporations are lying to the American people: Many times, the attack ads and flyers issued by often obscure groups portray false information about candidates. This is an intentional effort by special-interest groups to misinform and mislead voters. Our state and our country should want voters to make their decisions based on true and tested facts about all the candidates. And because our campaign finance laws are so lax, candidates do not have to refuse this assistance by special interest groups and they are able to take advantage without having to report to the state or the Federal Election Commission.

And would you as a voter not want to know exactly what values a candidate stands for? And when you spend money on anything, don’t you think about where your money is going and why you are spending on one candidate or cause over another?

Elitism: Because there are a few wealthy donors who influence politics, candidates are not reaching out to large segments of the voting population for financial support. They take small $10.00 contributions for granted. People of color and low-income communities are at odds against a system of financial elitism. Once these candidates get elected, they perpetuate the very system that prevents marginalized communities from being involved in the political process. Candidates are forced to vote for policies that can potentially harm the livelihood of everyday voters.

Hard choices: When campaigns are structured such that candidates rely on very few sources for success, there are limited venues for voters to influence politics. Take the following example: Chris Turek, one of my sassiest and most dedicated volunteers from the 2016 Clinton Campaign told me about the recent decline of her 93-year-old mother’s health. The Alzheimers has gotten so bad recently that she can barely talk and needs help to eat, which is part of why she lives with Chris. Chris does the best she can, and even takes her mom to the hair salon once a week and to the nail salon once a month religiously. But this love and devotion to a sick mother comes at a cost. She spends approximately $1000 extra every month – and she’s retired: Insurance is more expensive because Medicare doesn’t cover any injuries from car accidents, her mom has a different diet and so groceries are more expensive, etc.

Chris is an incredible leader who loves engaging in Democratic politics. However, she and many other activists find themselves in a dilemma: “Should I choose to volunteer for an organizer or donate money and attend fundraisers?” From my experience, there are many who would prefer to volunteer because they can’t/don’t want to spend the money on fundraisers and know that their work is effective in getting votes, electing Democrats, and implementing policy change. Donors (especially the wealthier ones) find giving money more convenient than physically knocking doors or making hundreds of phone calls. While there are definitely individuals who do some of both, most people make a choice between the two.

In other words, our campaigns have not effectively synchronized field and fundraising efforts to maximize voter turnout. More importantly, our campaigns are exclusive and still do not do enough grassroots fundraising. We don’t value $5.00 from individual donors, because it’s not enough to win. We host many events where even the lowest ticket price is unaffordable to some.

That being said, there are definitely many candidates this cycle who have sworn off corporate contributions and who believe that it is important to perform outreach to all members of the community. I have faith in this process because value-driven campaigns are more meaningful. Clean campaigns that force candidates to reach people from all economic backgrounds lead to better representation once they are in office.

What Should You Do?

I hope you didn’t think that I would just spew information at you – that’s not productive. Now that you know just how problematic Michigan’s campaign finance laws are, it’s time to take action.

Before these midterms, do research on the money in the races up for election. Be your own watchdog. Check Michigan’s Secretary of State website and the Federal Election Commission to see where candidate are getting contributions from and how they are spending. You should also do some research on the groups that pay for flyers and literature (check the bottom). Once you start taking an interest in the financial side of things, you’ll realize you’re a lot more comfortable with your vote.

You can also donate to organizations like the Michigan Campaign Finance Network which do a lot of the accountability work. They have useful information on their website about how money is spent in Michigan politics.

Lastly, make it a point to vote for the candidates who are running clean campaigns and spread the word about them. If you volunteer for them, then talk about the role of money in these candidates’ campaigns and why it matters. Whether you’re on the phones or on the door, you have a role in educating voters on whether it is conscionable to vote for candidates based on their campaign finance records. If we want clean campaigns, we have to demand them.