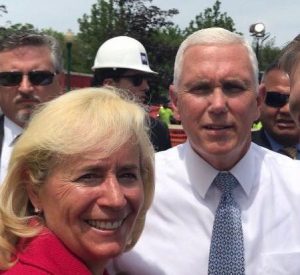 Republican pundit Bill Ballenger, best known for declaring the Flint water crisis to be “overblown,”* gave us some insight into another reason for Lang’s nomination in a rather creepy blog post in which he described Lang as “blonde” and “effervescent.” The post was titled: “Does a Republican Have to be a Woman to be Elected Secretary of State in Michigan?” Ballenger answered, “It sure looks that way” in the lede. 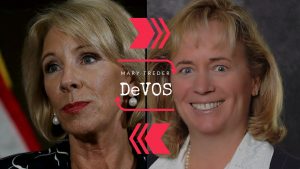 Lang can be expected to try and sell herself as some sort of friendly, nonpartisan figure in the general election, which has been the GOP playbook for years. In reality, she has been bragging for almost a year that she will use her position as the chief elections officer to help Republicans.

But don’t take my word for it. Check out the receipts at MaryTrederDevos.com 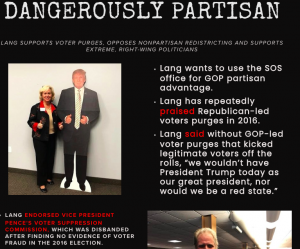 Lang said in an April 2018 podcast with Tea Partier “Trucker” Randy Bishop that without GOP-led voter purges that kicked legitimate Michigan voters off the rolls in 2016, “We wouldn’t have President Trump today as our great president, nor would we be a red state.”

Keep in mind that Michigan was the closest state in the 2016 election. Donald Trump only won by roughly 10,000 votes. Having a Republican SOS who is nakedly committed to tilting elections to the GOP could have far-reaching effects in the future.

This wasn’t a gaffe. Lang threw out this conspiracy theory in the May 2018 Lapeer Tea Party debate and said “God bless” current GOP Secretary of State for giving us Trump:

“If Ruth Johnson did not remove her half a million individuals, dead people from our voter files before the 2016 election this state here would not be red nor would we have president Trump in our office today and being a Republican president. God bless her and I will continue that forward momentum that she has created as a wonderful legacy of cleaning up the voter file.”

“We indicated Ruth Johnson doing a great job of cleaning up the voter files. You know, Ruth removed over a half a million deceased individuals before the 2016 election. Just imagine if she had not cleaned up the files before that election. Right now we wouldn’t have, not only be a red state, but President Trump would not be elected as the President in a fair election process.”

Not surprisingly, Lang is a big fan of Vice President Mike Pence’s voter suppression commission, which was disbanded after it failed to uncover any voter fraud in the 2016 election. Lang made a big deal about meeting Pence at a June 2018 campaign event in Michigan.

But voter purges aren’t all that Lang has planned if she wins. Lang wants to make it harder to vote and opposes the ACLU’s Promote the Vote ballot initiative in Michigan that would allow same-day voter registration and no-reason absentee voting.

Lang also opposes the Voters Not Politicians initiative on the ballot this fall that would create a nonpartisan redistricting process because she wants to keep the GOP advantage in redistricting.

If Mary Treder Lang is elected, she’ll be the most radically partisan Secretary of State in Michigan history. She hasn’t been hiding this fact. She’s been bragging about it for a year.

As Maya Angelou famously said, “When someone shows you who they are, believe them the first time.”

*Full disclosure: I happily fired Ballenger from his role as associate editor over his factually inaccurate and hurtful comments on the Flint water crisis when I was the editor and publisher of Inside Michigan Politics.