GOP candidate for MI-GOV Bill Schuette chooses a running mate nearly as contemptible as he is. Presenting: Lisa Posthumus Lyons 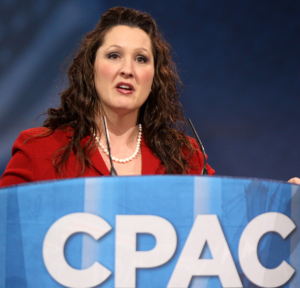 If you were looking for a more reprehensible proponent of the worst of Republican ideology than Michigan Attorney General and Republican nominee for governor Bill Schuette, you’d have to work pretty hard. But Bill Schuette, who seems to spend more time off the job than on, apparently used that free time to come up with someone who is a perfect match for his extreme conservative demagoguery to be his running mate. Yesterday, Schuette announced that he has selected Kent County Clerk and former State House Representative (2011-2016) Lisa Posthumus Lyons to be the candidate for Lt. Governor. 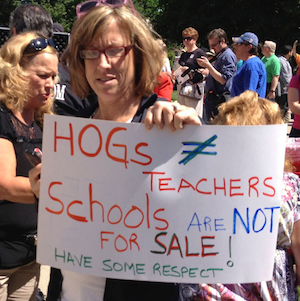 Who is Lisa Posthumus Lyons (other than the daughter of former Lt. Governor Dick Posthumus)? Well, by now, you’ve probably heard about her characterization of public school teachers as “pigs” and “hogs” that should be “slaughtered”. But there’s ooo-ooh so much more. So, let’s take a look at some of her “greatest hits”.

First, let’s go back to 2012 when Michigan Republicans rammed through legislation during the lame duck session to make Michigan, the birthplace of the modern labor movement, a right to work (aka, Right to Freeload) state. Lyons, of course, voted for this terrible bill that was intended to kneecap workers and their ability to organize collectively for better wages, benefits, and working conditions. But she went further than that. She introduced an amendment that would have exempted her husband, a corrections officer, from the new law:

State Rep. Lisa Posthumus Lyons, R-Alto, was among right-to-work supporters quoted in The New York Times on Tuesday, Dec. 11, saying “this is the day that Michigan freed its workers.” But she also proposed to add corrections officers to the list of public employees – including police and fire – not covered by the right-to-work law.

The amendment was gaveled down and did not come up for a vote.

“When we talk about the brave women in police and fire we need to remember people in corrections,” said Lyons, whose husband, Brad Lyons, is a corrections officer. “These guys work in conditions that we can’t even begin to imagine.

“It’s not financial. It’s philosophy. I am saying we need to treat our corrections officers that way we treat our police men and women and firefighter men and women.”

If you’re confused about this, let me explain: Lyons lauded the bill as “freeing workers” but wanted to shield her husband from all of this wonderful freedom. Her reference to police and firefighters refers to the fact that they were already shielded from freedom, ostensibly because they have a powerful, unified voice that voters are sympathetic to, something that Republicans fear.

If the words “hypocrisy” or “liar” pop into your head, you’re on the right track.

During that same lame duck session, Republicans went where few had ever thought to go before and passed legislation to allow the carrying of weapons in schools, daycare centers, churches, bars, and stadiums. Lyons, of course, voted to support that bill which was subsequently vetoed by Gov. Rick Snyder.

Lyons, who has received $16,000 from the DeVos family during her time in office, once Chaired the influential House Education Committee. During that time, Lyons was one of the chief proponents of expanding the now-defunct Education Achievement Authority. Long-time readers of Eclectablog will recall that we blew the lid off of what was happening inside the EAA, the so-called “school district for misfit schools”, an education experiment on Detroit school children that was a catastrophic failure and that set back education in our largest city by decades. In an interview on WKAR, Lyons told the host that people opposing taking this tragically failed experiment on poor kids statewide were “defenders of the status quo”.

In her rush to get this law passed (it never did), Lyons tried to hold the vote before MEAP testing scores were released, a move most saw as an effort to pass the bill before the continued failure of the EAA was documented even further through terrible MEAP results. In the WKAR interview, Lyons declared that “it’s universally accepted that MEAP scores just don’t adequately reflect student growth.” Not only was this idea not “universally accepted”, MEAP scores were the yardstick by which schools were measured to see if they should be dumped into the EAA.

During her time as a House Representative, Lyons also chaired the Elections Committee. In 2015, her committee passed a routine “housekeeping” bill that ended up becoming the vehicle for a new law benefiting Republican campaign donors. Here’s how Brian Dickerson from the Detroit Free Press explained what went down:

When Lyons’ committee voted unanimously to recommend its passage a week ago, SB 571 was a 12-page bill that reduced paperwork, but not disclosure requirements, for political action committees across the state. It had breezed through the state Senate with nary an objection from lawmakers of either party.

But when it emerged from a Republican caucus room Wednesday evening, SB 571 had metastasized into a 53-page behemoth that included GOP-friendly amendments to 10 different sections of Michigan’s Campaign Finance Act. It was adopted by both houses late Wednesday night without a single Democratic vote or amendment, and after the Republican majority voted to clear the Senate chamber of Democratic staffers and lock the senators themselves inside.

Gretchen Driskell, former State House Rep. and candidate for Congress in the 7th District, described it this way:

“We (Democratic legislators) had to pull our names off the bill because we didn’t know what was in it,” Driskell said.

She said legislators learned the proposal will prevent local governments, school boards and library boards from providing information about bond and millage proposals.

“It’s a huge problem when you’re working on a local project. Citizens need to know what’s going on,” Driskell said. “We tried to the block the bill but the rules were suspended and we weren’t able.”

Lyons, of course, voted for the bill.

Made it harder for citizens to put things on the ballot

Using her power in her position as the Elections Committee Chair, Lyons also championed a bill to make it more difficult for citizen-initiated referendums that allow citizens to make changes to the state constitution and to pass legislation when their elected officials refuse to do so.

Here’s Brian Dickerson again, describing how it was big oil and gas companies who were driving the anti-democratic legislation back in 2016:

Current Michigan law gives such petitioners 180 days to collect the requisite signatures, but requires the state to recognize older signatures if a petitioner can prove the signer is still a registered voter. SB 776 would abolish the procedure for rehabilitating such stale signatures, making it more difficult and expensive for petitioners to meet the ballot initiative requirements.

Who would want to make it harder for voters to place an initiative on the ballot?

Environmentalists say the effort is being spearheaded by Michigan’s gas and oil industry, which wants to head off a petition drive that would ask Michigan voters to ban the use of horizontal hydraulic fracturing, also known as fracking, and prohibit the storage and disposal of fracking waste products.

Indeed, four organizations associated with that industry — the Michigan Oil and Gas Association, the Michigan Chemistry Council, the Michigan Manufacturers Association and the American Petroleum Industry — provided the only testimony in support of SB 776 at a hearing held earlier this month shortly after Robertson introduced the bill (although Republicans are also interested in blocking a marijuana legalization initiative that threatens to draw young voters to the polls if it makes the November ballot).

Republicans on Robertson’s committee green-lighted the bill on March 8, and the full Senate passed it two days later on a straight party-line vote. Lyon’s committee took up SB 776 a week later, and it appears to be on a similar rocket sled in the House.

Thanks, to Lisa Posthumus Lyons’ “leadership”, the legislation passed and was signed into law by Gov. Snyder on June 9th.

And finally, right before leaving office in 2016, Lyons introduced a package of voter suppression bills during that year’s lame duck session that would require a photo ID to vote and eliminate the ability of those without a valid photo ID to vote a provisional ballot. Lyons introduced the three bills on November 29th, a hearing was held the next day, and then her committee passed it the day after that. The final version contained an appropriation which prevents voters from overturning through a ballot proposal making it “democracy-proof”. Fortunately, that bill did not become law because, if it had, it would put Michigan among the most regressive states in the country with regard to making it harder, rather than EASIER, for citizens to vote.

So, there you have it. Bill Schuette’s running mate Lisa Posthumus Lyons, a woman with a long legacy of some of the most reprehensible actions by a state legislator that you can find. Like I said, Bill Schuette chose someone who is a perfect match to his extreme conservative worldview.

It’s worth noting that Trump-loving Republicans are none too pleased by this choice. While Bill Schuette is an “Ever Trumper” who has been endorsed (in a tweet that misspelled Schuette’s name) by Trump, Lyons, on the other hand, was once a “Never Trumper”. Here’s what she wrote in a now-deleted a Facebook post in 2016:

Now that she’s on the ticket, however, she’s changed her mind.